A gathering of parked cars blared their horns as dusk fell over the parking lot. Parents arrived once more on a Tuesday evening to protest against distance learning at the Loudoun County Public Schools (LCPS) board meeting.

After parents finished honking, they joined the meeting so that they can speak to the board directly. November 10th marked the fourth “Honk for Back-to-School” that parents and community members have attended. These individuals continue to protest the total distance learning at LCPS. 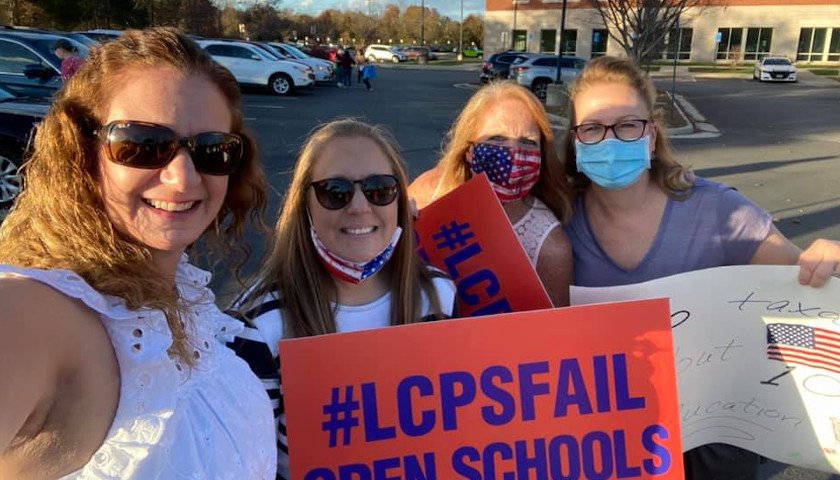 Once LCPS announced that fall semester would consist of distance learning only, most parents turned to social media groups to advocate the reopening of schools. One private Facebook page, “LCPS Can Do Better,” boasts nearly 1,000 members. Several of these activist families put up $1,400 to place an ad in the local paper imploring the board to open up schools.

One mother, Debbie Edsall, shared with The Virginia Star that she got involved because LCPS has deprived daughter of her senior year. That, and she recognized the negative impact that distance learning was having on younger children.

“There are serious mental health concerns.  Kids are expected to sit on a Chromebook all day. Kids from kindergarten! It’s ridiculous what their expectations are. They don’t know how to read or write – and they’re supposed to operate a Chromebook.”

Edsall explained that her daughter entered a pilot program for hybrid learning this semester. However, only one teacher was there in person out of the four classes – the remainder taught from home out of concerns for COVID-19.

“That’s fine, but my child shouldn’t suffer because of that. Our goal overall is to make sure our children have the appropriate education opportunities because distance learning isn’t working.”

Another mom, Karlee Copeland, had similar reasons for joining. Her older son is a seventh grader. Copeland explained that the distance learning was negatively impacting his mental health as well.

“12 to 13, you’re going through an awkward time. It’s a time where we’re trying to become social beings. He really can’t with distance learning. And, he feels behind all the time. Really, it’s sad to watch your child feel defeated.”

Copeland added that her son hasn’t received the same level of education as he had previously, especially when it comes to reviewing classwork or tests.

“I don’t think the kids are really getting the education they should. You learn from your mistakes – I wish there was a better feedback loop. It’s a sad state of affairs, that our lives have turned upside down for a disease with such a high survival rate.”

Another LCPS mother, Carolyn Nuff, has fraternal twins that are also missing out on their high school senior year.

“They have already missed out on a lot of the deservedly memorable events so far of being seniors. They are doing well, thankfully, but we are all struggling to make arrangements for SAT tests that keep getting rescheduled, applying for colleges for next year, keeping up with assignments, and allowing them a safe social life.”

Nuff shared that she decided to help advocate for reopening schools because distance learning doesn’t match up to all of the benefits of in-person learning.

“I believe that schools need to be open for all kids and they deserve to be taught in a classroom setting with a teacher, who can give personal instruction and assistance. During COVID, there have been successful, safe measures utilized in other states to return kids to school.”

Patti Menders, an LCPS parent and Loudoun County Republican Women’s Club President, told The Star that she and other parents expected LCPS to have used the summer to prepare adequately for the fall. She stated that her expectations increased after LCPS essentially canceled traditional grading for the remainder of the spring. However, Menders shared that wasn’t the case.

“Kids are failing. They can’t learn behind a screen. My kid got four D’s this semester – he’s never had a D in his life. He had to get out of his honors biology class because the teacher said that he ‘didn’t have time’ for my son in an email, because he had to prepare for other classes.”

As for other families with unique situations, Menders pointed out that parents with special needs children were having an even harder time with distance learning.

“I’ve got a girlfriend who has five kids at home, and one of them has special needs. It’s hard for her. They don’t have all the resources they need.”

These women report that an average of 80 to 130 people have shown up to each school board meeting to discuss the detriments of distance learning.

It appears that these parents’ efforts have paid off. During Tuesday’s board meeting, the board voted unanimously to allow 3rd through 5th grades to enter hybrid learning come December, and grades 6th through 12th in January.

Corinne Murdock is a reporter at The Virginia Star and the Star News Network. Follow her latest on Twitter, or email tips to [email protected].