RICHMOND, Virginia – After heavy rain Thursday, Virginia and North Carolina experienced flooding, leading to three deaths in North Carolina. In Farmville, Virginia, authorities rescued boaters on the flooded Appomattox River, according to WWBT.  According to local reports, the Hampton Roads and Suffolk regions experienced flooding that closed local roads, while fire crews had to retrieve boats that slipped their moorings due to flooding at the Smith Mountain Lake near Roanoke. According to WDBJ7, drivers had to be rescued near Salem and Roanoke. 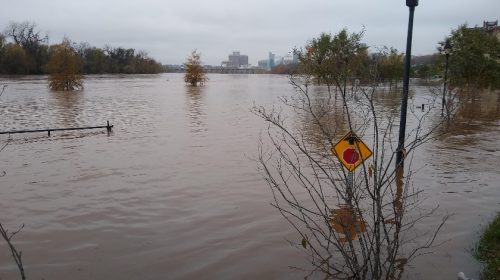 Three people died at a North Carolina campground, according to a press release by North Carolina Governor Roy Cooper. According to the release, two people were missing on Friday. Cooper declared a state of emergency.

“This storm has already claimed several lives, and everyone should exercise caution by avoiding flooded roads and areas along swollen creeks and rivers,” said Governor Roy Cooper. “Our prayers go out to the families and friends of those who were injured or killed by these devastating floods.”

According to the press release, parts of North Carolina saw more than nine inches of rain. In Virginia, the NWS said in a Friday afternoon forecast, “With a widespread 3 to 6+ inches of rain having fallen, most of the forecast points in the James, Appomattox, Chowan, and Lower Roanoke basins are experiencing minor to moderate flooding. In addition, Flood Warnings are in effect for the portions of the Mattaponi/South Anna Rivers. The crest wave in the area rivers will move eastward/southward through the basins over the next few days, but in some of the slower river basins like Sebrell, the flooding will linger into early next week.”

Richmond’s public works department took the opportunity to look at the history of the floodwall, which was completed in 1994. The department noted that the floodwall is up to 50 feet high and over 9,000 feet long, and protects 750 acres of low-lying land on both sides of the river, and cost $143 million at time of development.

“In 1986, President Reagan approved the development of the floodwall, right after Hurricane Juan raised the James River’s water level up to 31 feet at the City Locks, a bit shy of Hurricane Agnes’ 1972 record at 36.5 feet,” the department tweeted.