After a lackluster 2019 season, the Virginia Tech men’s basketball team is aiming to improve in the second season under head coach Mike Young and show they can compete in the Atlantic Coast Conference (ACC), arguably college basketball’s best league.

When asked by media if the team can improve in the ACC, Young said: “I do, but you’ve heard me say it, you’ll hear me say it again, every year [has] the same goal: to take this team as far as I can take them and see them grow and develop and come together as a unit in a bizarre time for all of us. 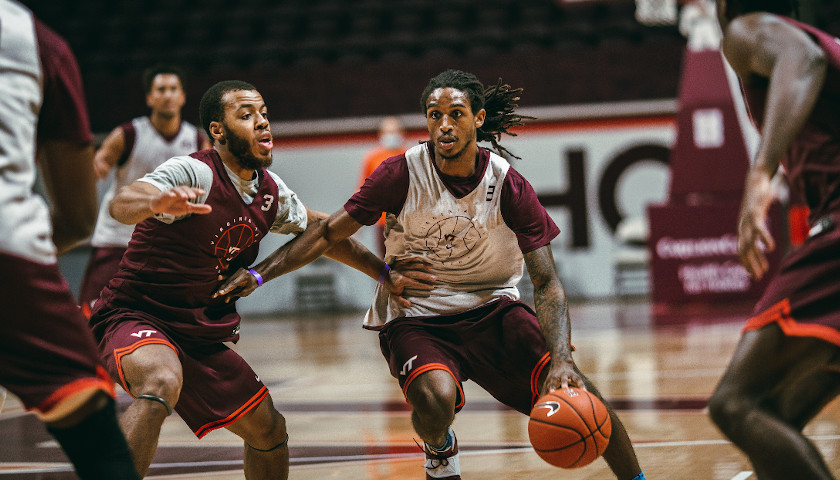 “But I do. We are better. How much better, I’m not sure yet. I think appreciatively simply because we’re bigger and stronger and can beat you in more ways.”

During the press conference, Young also said the team has done a pretty good job so far handling COVID-19, all the changes that have resulted from the virus and adhering to health protocols established by the medical staff.

The Hokies finished tenth in the ACC with seven conference wins and 13 losses in 2019. In this year’s ACC preseason poll, Virginia Tech is slated to finish 11th, ahead of only Notre Dame, Pittsburg, Boston College and Wake Forest.

Only six players that logged minutes are returning from the 2019 squad and the Hokies lost leading scorer Landers Nolley to a transfer. In the offseason, Young and his coaching staff worked to revamp the roster, adding three graduate transfers and bringing on four freshmen.

“We are deeper. In Year 2, I feel good about the balance of our roster,” Young said. “I talked about it in the office yesterday where [our] distribution will be in terms of minutes in the early season and how that will compare to the end of the season. That will be interesting as guys come into their own more. We can plug different people into some different spots that we didn’t have last year.”

With so many new faces and no preseason scrimmages against other schools per new NCAA rules, one of the Hokies biggest challenges will be players’ chemistry on the court.

Bede said the team chemistry is good at the moment, but it doesn’t just happen all at once.

“We are all improving day by day and that’s what I like about this team,” Bede said. “We are going to get there and we are going to push each other every single day. We have to translate that to the court and good things will happen. So I’m very excited about this team.”

For the 2020-21 season, Virginia Tech will play 24 games – four non-conference matchups and then a 20 ACC contests.

The Hokies begin the season and non-conference portion of the schedule at home against Radford on November 25th. Then, the team will travel to Connecticut to play Temple and South Florida in the Air Force Reserve Basketball Hall of Fame Tip-Off Tournament. Finally, Tech will play Penn State in the ACC/Big 10 challenge on December 8th.

The team begins its ACC slate at home against Clemson on December 15. Just like every season in the ACC, the schedule only gets harder from there. Virginia Tech will play conference powerhouses No.4 Virginia, No.21 Florida State and Louisville twice.

Nevertheless, Tech only plays college basketball blue bloods No.16 North Carolina and No.9 Duke once. The Hokies get to face the Blue Devils at home on January 13, but will travel to Chapel Hill to take on the Tar Heels on February 16.