No.22 Liberty Flames easily cruised past the Western Carolina Catamounts 58-14 Saturday afternoon to remain unbeaten on the season and improve to 8-0 for the first time in program history.

After walloping the Catamounts, Liberty has now won 10 games in a row dating back to the end of last season, the second longest active winning streak in all of college football. 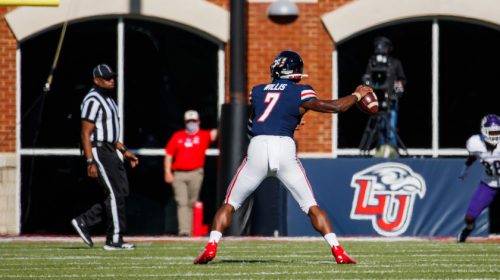 “Excited to be 8-0,” head coach Hugh Freeze said postgame. “Obviously, it wasn’t pretty at all times and we probably could have done a lot of things better, but I did think [the team] prepared better this week coming off an emotional, big win last week and executed enough to win the game handily.

“I think our kids did what they needed to do to get to 8-0 and it wasn’t exactly, maybe, like [how] I would have drawn it up, but it was sure good enough, and I’m going to celebrate with them on that.”

In the game, the Flames had clear advantages over Western Carolina on offense and defense.

The Flames defense was suffocating, forcing three turnovers – two inceptions and one fumble – and stopping the Catamounts’ offense on most possessions except for two touchdowns and a missed field goal. Freshman linebacker Carl Poole had an especially big game on defense, snagging a one-handed interception and then forcing as well as recovering a fumble later one.

On the other side of the ball Liberty’s offense put up 58 points and 633 scrimmage yards, both season highs, resulting in eight touchdowns and 21 first downs.

The star of Liberty’s offense was once again quarterback Malik Willis, as it has been all season long. Willis had five total touchdowns, throwing for three and running for the other two.

All together Willis garnered 403 all-purpose yards – completing 14 of 19 passes for 306 yards and running the ball eight times for 96 yards, including a 43-yard untouched scamper right through the middle of the defense.

“We work real hard and we usually just try to do what we need to do in order to win,” Willis said postgame. “Beginning of the season, we didn’t need me to throw for however many yards or however many touchdowns, we just had to continue to hone in on the run game. But we have gotten opportunities to air the ball out and we just have to take those opportunities where we get them.”

Willis capitalized on many chances to air the ball out during the game, connecting with freshman wide receiver CJ Daniels for a 40-yard touchdown as well as an 83-yard bomb to wide receiver Kevin Shaa to put the Flames up by 35 at the start of the third quarter. 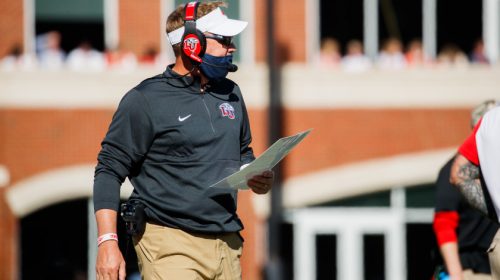 A football perfectionist, Freeze described his quarterback’s play as “really solid” and said there were some operational things that Willis had missed in the first half. Freeze did offer some praise, saying Willis did well in reading the play progressions and, most importantly, did not turn the ball over.

“You get to where you expect so much out of him on every play and I had to temper my emotions sometimes,” Freeze said while discussing Willis. “[I] probably expect him to be perfect on every play and that is just not reality.”

After two quick touchdowns in the first minutes of the third quarter, Willis was taken out of the game. If the Auburn transfer keeps this pace, Willis will play himself into a Heisman Trophy contender.

For Western Carolina, a relatively young and inexperienced team, Saturday was the first game of the 2020-21 season and was the first time they had played live football since November of 2019. The Catamounts, part of the Southern Conference, are only playing three games in the fall before playing conference matchups in the Spring.

The Catamounts were using the game against Liberty to get many players real game experience and to help solidify the depth chart for future matchups. The most glaring example of this was quarterbacks Mark Wright and Will Jones subbing in and out for one another throughout the game.

Despite only producing 14 points, Western Carolina’s offense scored both times they reached the red zone and found some success running the ball.

Liberty must now look ahead to next Saturday when the team faces its third opponent of the season from the Atlantic Coast Conference in North Carolina State (4-3).