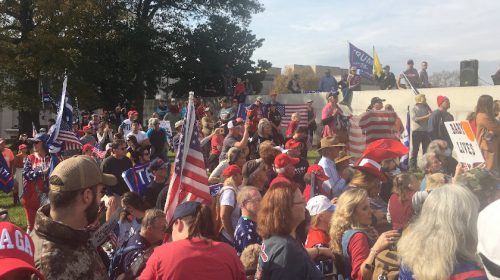 The rally began with a prayer, followed by a rendition of the National Anthem from singer, actress, and conservative activist Joy Villa. Villa has received both criticism and praise for her pro-Trump and pro-life dresses at celebrity events, such as the Grammy Awards.

State Senator Mark Pody (R-Lebanon) opened with a few words to encourage the attendees on the current state of the election.

“It is the people that vote. Not the press. You cannot declare yourself president.”

After singing the National Anthem, Villa announced that she’d moved to Nashville recently because of how this political climate has impacted her faith. The singer testified that God had told her to move from California to Tennessee.

“This is God’s country. You’re my family because we’re patriots and you’re fighting alongside me. This is our 1776 and I truly believe this,” stated Villa. “It’s Democrats versus freedom-loving Americans. I don’t say ‘Republicans’ because there’s a lot of ‘RINOs’ out there: ‘Republicans In Name Only.’ I don’t think this is Democrats versus Republicans. It’s good versus evil.” 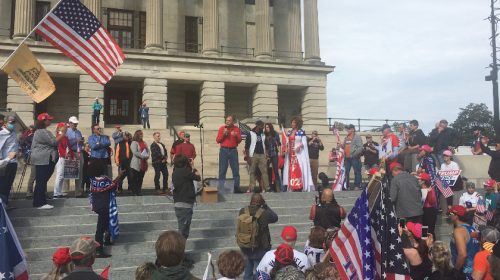 Conservative activist Ty Bollinger came onstage next, and shared a small anecdotal story about his daughters. According to Bollinger, his younger two daughters remained at home from this second rally because of the harassment they’d faced for wearing “MAGA” hats at last weekend’s rally.

Bollinger then listed off the current evidence for fraud, including the increasing numbers of affidavits being filed.

After Bollinger, previous U.S. Senate candidate Jon Henry told the crowd that they needed to continue their efforts in the conservative movement with more energy than before. Henry stated that the conservatives can’t afford to be a silent majority anymore – they must be a majority.

Next, conservative activist Brad Barton referenced the Book of Esther, reminding the crowd that Esther stood up against Haman and won after he’d sentenced the Jewish people to death.

The event ended after attendees recited the Pledge of Allegiance and participated in one last prayer. The organizers played a video from Senator Marsha Blackburn (R-TN), in which the senator applauded the attendees’ diligence to the cause in stopping the steal of the election.

Landon and Robby Starbuck – the husband and wife duo known for their work in the music and film industry and fight against human trafficking – spoke briefly about Trump’s accomplishments. The couple also told the crowd to reject Hollywood culture in order to fight for conservative values.

“This is a movement from every background and every walk of life. That is the one thing I’m most grateful to our President for. The sleepy RINOs have another thing coming,” stated Robby.

In an interview with The Tennessee Star, Starbuck stated that he is running for Congress against current Representative Jim Cooper (D-TN-05). He shared that his grandparents escaped to America from Cuba so that they could be free. According to Starbuck, much of current government authority is beyond where it should be – especially during this year’s pandemic.

“Whether or not if you agree, the one thing we don’t live in is a monarchy – they don’t have a right to take away our individual freedoms.”

One rally attendee, Army veteran Coy Chandler, told The Star that he will attend every “Stop the Steal” rally to show his support.

“If you don’t stand up right now, you’ll never get another opportunity to stand.”

Only four or five counter-protestors showed up, all wearing masks. Two held signs that read, “GO HOME YOU LOST (didn’t they teach you about losing fair & square in grade school?)” and “YOU LOST, GO CRY ON PARLER.”

Of the four, only one would speak with The Star. The man, who wished to remain anonymous, held the latter sign mentioning Parler, the newly-launched social media platform popularized by conservatives.

“I just wanted to show some pushback, to show that not everybody agrees with them. That’s it, I didn’t have a plan,” “I’m opposed to Trump. I voted for Biden because he’s the lesser of two evils, but I’m mostly opposed to Trump, his fascism and racism.”

The other protestors stated that they didn’t wish to give any statement to The Star. Some of the rally members argued with the counter-protestors about the existence of voter fraud.

One of the main organizers, Moms for Tennessee President and Phyllis Schlafly Eagles Tennessee Leader Cecelia DeSonia shared with The Star the mindset behind organizing the rally.

“People have been praying over this event. We’re going to do this every Saturday until we get results. I think we’re helping people feel good – people are in a very weird space right now. What we’re offering is encouragement, and prayer.”

Organizers shared that individuals interested in doing more for the conservative movement could text “America” to 33777.