NASHVILLE, Tennessee–Bettors in Tennessee made $27 million in wagers during the first week and one day of legally authorized sports-only gambling in the state.

“These numbers are encouraging as we work to protect the consumer, promote fairness in sports and regulate this new Tennessee industry that provides critical funds for education, as well as local governments and problem gambling services,” President and CEO of the Tennessee Education Lottery (TEL) Rebecca Paul Hargrave said on Monday of the launch of legally authorized sports-only gambling in the state.

Four companies have been approved by the TEL as sportsbooks in Tennessee. Action 24/7 is the only Tennessee owned and operated company among those four. The other three are international publicly-traded companies.

Hodges told The Star “Action 24/7 is ready to compete” with the three larger out-of-state sportsbooks that are also operating in Tennessee.

“We are very happy with Action 24/7’s launch in Tennessee.  Our Andriod and iOS apps are up and running. We’ve had great registrations so far. We are beating our projections. We’re also running a low budget office. We’re being smart about how we’re spending our money,” Hodges said.

Hodges told The Star one of Action 24/7’s competitive advantages over the out-of-state sportsbooks is the company’s “same day pay” feature.

“Our ‘same day pay’ feature is a customer favorite. Other sportsbooks keep a player’s winnings sometimes for multiple days. Action 24/7 pays winnings on the same day the bet is won,” Hodges said.

Hodges noted that customers prefer being paid on the day they win their bet, rather than having to wait beyond that.

Other sportsbooks are using big name celebrities to grab the attention of fans, such as MGM which is aligned with Jamie Fox.

An investor deck obtained by the The Star shows that Action 24/7 had planned to do the same with its owner and partner, Clay Travis of Outkick the Coverage. When asked directly about Clay and his apparent switch over to FanDuel, Hodges simply stated she was not able to discuss the membership of the LLC. Travis did not return repeated requests for comment from The Star on Monday.

Action 24/7 President Hodges told The Star the locally owned and operated company is currently competing against three international publicly-traded companies under what are “very unique circumstances.”

This is especially true of Tennessee’s 10 percent hold requirement.

“We are the only state that has it. The requires that we keep a 10 percent hold. It is going to be tough, I think. It gets into free play promos and all of the advertisements that you are seeing from our competitors about ‘free this, free that, do this and get $1,000, you can lose $1,000 and we’ll pay you back,’” Hodges told The Tennessee Star Monday.

Action 24/7 is headquartered in modest startup offices in Nashville. 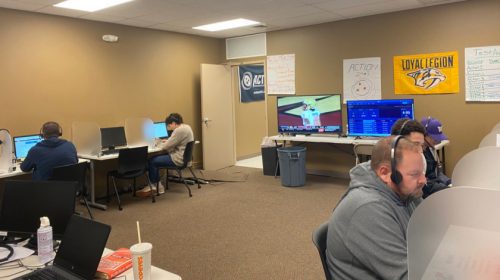 As The Star reported in September, members of the Tennessee General Assembly enacted sports betting into law more than a year ago. The licensing authority is under the Tennessee Education Lottery.

All of Tennessee’s sportsbook companies, Hodges said, must not disregard the state’s 10 percent hold requirement.

“All of those sorts of freebies are going to limit those organizations from being able to reach this hold, and it just doesn’t seem from their advertising that they are taking it seriously,” Hodges said.

“I think that [the 10 percent hold rule] will be a real issue coming up for the guys doing that [anyway], and I think they need to take very seriously the rules that our legislature and the lottery board have put in place because they are going to enforce them,” Hodges said.

“From their advertising it doesn’t look like they are taking them seriously right now. But they should.”

According to Monday’s Tennessee Journal, state tax collections from these wagers will go to the Lottery’s education account, cities and counties on a per-capita basis, and the Tennessee Department of Mental Health for gambling addiction treatment programs.

Action 24/7 is an advertiser on The Tennessee Star Report radio program.