COLUMBUS, Ohio- During Tuesday’s COVID update, Ohio Governor Mike DeWine issued a statewide 21-day curfew.  Ohio businesses are expected to close at 10:00 p.m. and residents mandated to be in their homes until 5:00 a.m.

“We’re not shutting down, we’re slowing down” said DeWine.  The order comes after rumors spread late last week that Ohio would be shut down for four to six weeks.

The grounding comes as all 88 counties are listed as “high incidence” for COVID spread.

Last week the Governor announced a renewed statewide mask mandate ordering Ohioans to be masked and businesses to require their employers and customers to comply or face penalties, including closure, from the Bureau of Workers Compensation Retail Compliance Unit.

The statewide mask mandate went into effect on July 23 after cases had, then, peaked over 1,600. Since then, cases have risen and as October started, they spiked sharply.

Also last week, the New England Journal of Medicine released a report on a study conducted on Marines that tracked the COVID spread among quarantined Marines who strictly adhered to nonpharmaceutical interventions (NPI) – wearing double-layered masks indoors and out, distancing at least six feet from others, eating plated meals in areas wiped down before and after they ate, and using continually disinfected bathrooms. The non-quarantined group that didn’t have strict oversight of their NPI activities actually had a lower incidence of spread. 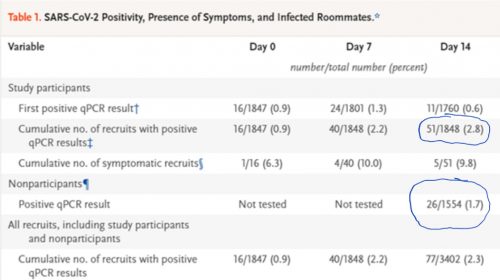 As Ohio continues to see high numbers of COVID cases – reporting 7,079 on Tuesday – and increases in hospital admissions, The Ohio Star and WMFD reporter asked Governor DeWine about the efficacy of the mask mandate and other NPIs.

Last week your medical experts told us that they see mask compliance being high and shutdowns would do more harm than good.

Back on July 15 cases were already dropping and you said “if all of us put on a face covering for 4 weeks, 6 weeks we would drive this epidemic into the ground” Now here we are 16 weeks later.

Last week the New England Journal of Medicine military study indicated cases were actually higher in those who quarantined and underwent strict enforcement of masking, distancing and disinfecting.

It appears that the masking, distancing, quarantining is not stopping the spread – but it is certainly creating unintended consequences that are hurting more people than the virus.  But it appears your team won’t come off the dime and consider a different direction. Why?

Vanderhoff began with a warning –  “I would caution anyone looking at a particular study and using it as a basis for contradicting a vast repository of medical data and information.”

However, last week there was a single study released by Nature.com that tried to predict the risk of spread from areas such as restaurants, bars, gyms and churches based on cell phone data captured March through May.

Prior to the study being released, DeWine had lauded restaurants and bars for their strict adherence to mitigation strategies and claimed, repeatedly, that businesses were not sources of spread.

But the evidence countering the “incontrovertible” efficacy of masks doesn’t come from one study alone, in fact there have been two in the past week, including the one from the New England Journal of Medicine.

A Danish report released in the Annals of Internal Medicine concluding that the “recommendation to wear surgical mask outside the home among others did not reduce, at conventional levels of statistical significance incident of SARS-CoV-2 infection compared with no mask recommendation.”

Ohio’s mask order does not call for surgical masks to be worn, rather the statewide mandates allow for face coverings – which can simply be cloth.

Continuing with his answer, Vanderhoff then emphatically defended the state’s various mandates and mitigation measures. “It is incontrovertible (there can be no other truth on the matter) that masking is effective in reducing the spread of this virus.”

The Chief Medical Advisor also claimed that COVID has “evolved to become highly contagious.” Whether this means the virus is more transmissible and less deadly remains to be seen, according to Wendy Orent in an article in Medscape. So far in Ohio, cases numbers have risen from around 1,000 to over 5,000 (by onset date) an increase of over 500% but deaths have remained stable over the same time.

Vanderhoff said that COVID is a respiratory virus and there is “very-good science around the droplet nature of this virus.” Concluding he said that “common sense” measures we all learned from our mothers make it obvious that distancing and hand washing help reduced spread.

Previously DeWine praised Ohioans for high mask compliance but in recent weeks has criticized those who don’t wear them and said that compliance is not as high as it needs to be. This despite his medical leaders last week, during a specially-called Monday presser, indicating that mask compliance was high.

The Star reached out to the Governor through his Press Secretary Dan Tierney to find out where DeWine gathering information to drive his perception on mask and mitigation compliance.

Tierney said DeWine got his information from “anecdotal observations from local officials and health departments.”

Jack Windsor is Managing Editor at both The Ohio Star and The Michigan Star. Windsor is also an Investigative Reporter at WMFD-TV and The Virginia Star. Follow Jack on Twitter. Email tips to [email protected].
Photo “Dr. Bruce Vanderhoff” by Mike DeWine.