At least seven former higher-ups of Facebook or the charity run by its founder, Mark Zuckerberg, have secured positions in President-elect Joe Biden’s transition team, despite Democratic Party officials labeling the social media giant among the biggest threats to American democracy.

Biden announced Friday that former Facebook Director of Public Policy Louisa Terrell would direct his White House Office of Legislative Affairs, which will put her in charge of advancing Biden’s agenda in Congress. Terrell, who lobbied for Facebook from 2011 through 2013, currently oversees legislative affairs for the Biden transition team.

Terrell’s appointment to the influential Biden administration post comes shortly after Biden campaign spokesman Bill Russo said in a now-deleted tweet that Facebook was “shredding the fabric of our democracy” for allowing disinformation to propagate on the social media network following the election. 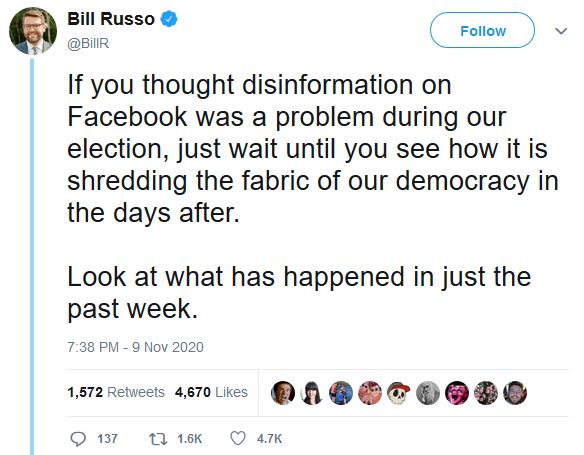 Biden told The New York Times editorial board in January that Zuckerberg is “a real problem.”

The Biden transition team told Politico on Monday that it supports the criticisms the campaign levied against Facebook.

Biden transition co-chair Jeff Zients served on the Facebook board of directors from 2018 to early 2020, and Erskine Bowles, who held a seat on Facebook’s board from 2011 to 2019, serves as an advisor to the transition team, according to Politico.

Zients reportedly left Facebook due to disagreements with how disinformation was handled on the network and Bowles left after Facebook leadership refused to follow his political advice, according to The Wall Street Journal.

Politico also reported that a former Facebook executive who helped the company navigate the FTC’s probe into Cambridge Analytica, Jessica Hertz, was named general counsel for Biden’s transition team in September, an appointment that was criticized by the left-wing of the Democratic party.

“The ultimate arbiter for ethics for the Biden transition was a senior regulatory official for Facebook up until a few months ago, at a time when progressives and the Biden campaign are fighting against the right-wing agenda of Facebook,” said the Director of the Revolving Door Project, Jeff Hauser, according to Politico.

Lin, who according to his LinkedIn profile held the same title during a brief stint at Facebook in 2017 and 2018, also serves on Biden’s agency review team overseeing the National Security Council.

The Biden transition team did not immediately return a request for comment.

Andrew Kerr is a reporter for the Daily Caller News Foundation.
Photo “Mark Zuckerberg” by Anthony Quintano. CC BY 2.0.