An Ohio mom organized a rally within earshot of Ohio Governor Mike DeWine’s home in Cedarville, Ohio to protest his recent orders limiting the number of people who could gather.

Over 300 Ohioans showed up between 8pm and midnight on Friday, November 20.  People came “from Canton, Portsmouth, Cincinnati and Dayton,” said the event organizer, Misty Murphy. 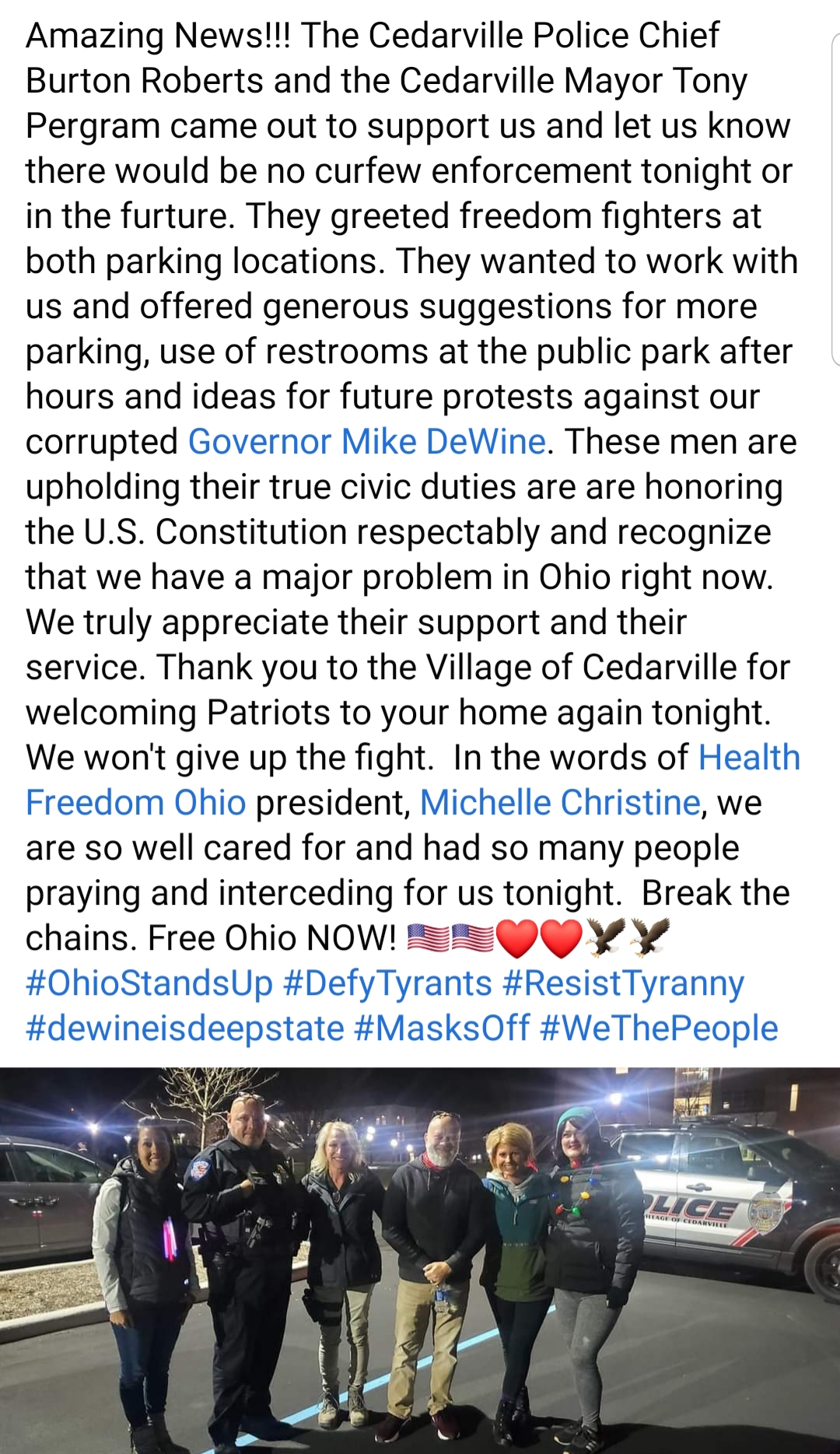 “After all of his absolutely nonsensical orders, when he said ‘no dancing’ at his Wednesday night presser and took it to that level of stupidity, moms were done,” wrote Murphy, an Ohio mother of two.

Murphy put together “dance party” protests to exercise her First Amendment right to protest.  She believes the orders “mess with rights” of her family, and Ohioans. Consequently, “we are going to mess with your privacy” alluding to Governor DeWine.

“We counted 300” said Murphy of the Friday night protest.  Friday night was the second protest, the first on Wednesday, November 18 – it also ran from 8:00 p.m. to midnight.

Friday’s event was approved by both the Cedarville Mayor and Police Chief, according to Murphy’s Facebook post.

Selena Poling, who attended the Friday night protest said: “the past eight months has opened my eyes to much.  I had not gone out and stood with others protesting against these mandates and orders, but I felt I needed to do more.  After watching a recent DeWine press conference where he said, ‘no more dancing’, I just felt outraged.”

“We have been distanced, we have been masked, we have been forced to walk one way down the aisle at a grocery store,” continued Polling. “Hearing that we couldn’t dance just hit a nerve with people.  We thought how better to show this man the ridiculousness of his words than to have a dance party in the street at his house.  We put something together and rode out there with music and had fun.  So many people showed interest, we decided to do it again.”

Governor DeWine has continued to tout the rise in cases and hospitalizations in Ohio – cases have jumped over 350% from previous highs in July.  However, deaths remain stable and have not come close to their peak in April, according to the Ohio COVID website.

“The only person that has ever given me a curfew is my dad. DeWine is not my daddy,” said Audrey Caeton.  She wrote to The Ohio Star that both protest nights had hundreds and noted “It was a beautiful sound of FREEDOM! The Cedarville chief of police AND the mayor stood in agreement with us and thanked us for standing up.

Jack Windsor is Managing Editor at both The Ohio Star and The Michigan Star. Windsor is also an Investigative Reporter at WMFD-TV and The Virginia Star. Follow Jack on Twitter. Email tips to [email protected].