Senate Bill 311 (SB311), a bill to limit the Director of Health order-issuing authority, will be vetoed by Ohio Republican Governor Mike DeWine.  The Governor has 10 days with which to exercise that right – speculation is he will take all 10.

The Ohio Star reported the prospective law has more support in the Ohio House of Representatives than votes showed last week, according to Ohio State Representative Jon Cross (R-Kenton) (pictured above).

In an interview with The Star, Cross said that three of the quarantined voters who didn’t cast a ‘yea’ or ‘nay’ vote last week would have been ‘yea’s – bringing the support to 61 votes.  The bill would have only needed 60 to override a veto since it already had veto-proof support in the Senate. 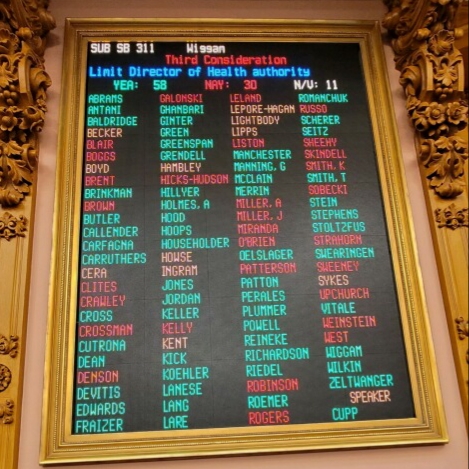 Procedurally, there is no guarantee the bill will make its way back to the House.  SB311 must first go back to its chamber of origin, the Senate.  There it will need three-fifths approval from Ohio’s 33 senators (20 votes) if it is to get back to the House.

On September 24 it received 20 votes, with all 33 Senators voting.  The tally was as follows, according to the Ohio Legislature archive:

SB3111 also gives the General Assembly power to rescind orders by resolution without the Governor’s approval – since a resolution is not a law.

However, there is no guarantee that vote count will be duplicated. In a phone interview with The Star, State Senator Andrew Brenner, (R-19) said that the bill might make the supermajority mark, but it also might not.  “I think this one will be decided by one vote either way.”

Before the bill gets a vote on either floor, it will require effort of leaders of both chambers – Speaker of the House Bob Cupp (R-Lima) and Senate President Larry Obhof (R-Medina).

The Star contacted Senate President Obhof to ask whether he will work the legislation to the floor and whip the necessary votes.  Obhof had not responded before this article published.

Representative Cross told The Star, that the Speaker may keep the vote open in the event SB311 reaches the House and a floor vote again.  This would allow representatives who need extra time to cast their votes to ensure their votes  are counted.

Cross also told The Star that Ohio law forbids blocking lawmakers from voting due to quarantine or other measures.

Even if the bill passes the senate, Speaker Bob Cupp (R-Lima) would be in charge of captaining SB331’s fate.

The Star is in receipt of a memo sent to the Ohio House of Representatives State and Local Government Committee, the committee from which SB311 emerged before being debated and voted on the floor last week. The memo is from, among other organizations, the Ohio Hospital Association (OHA) and the Ohio Business Roundtable (OBR).

The memo urges the committee to vote down the bill as a matter of public safety. 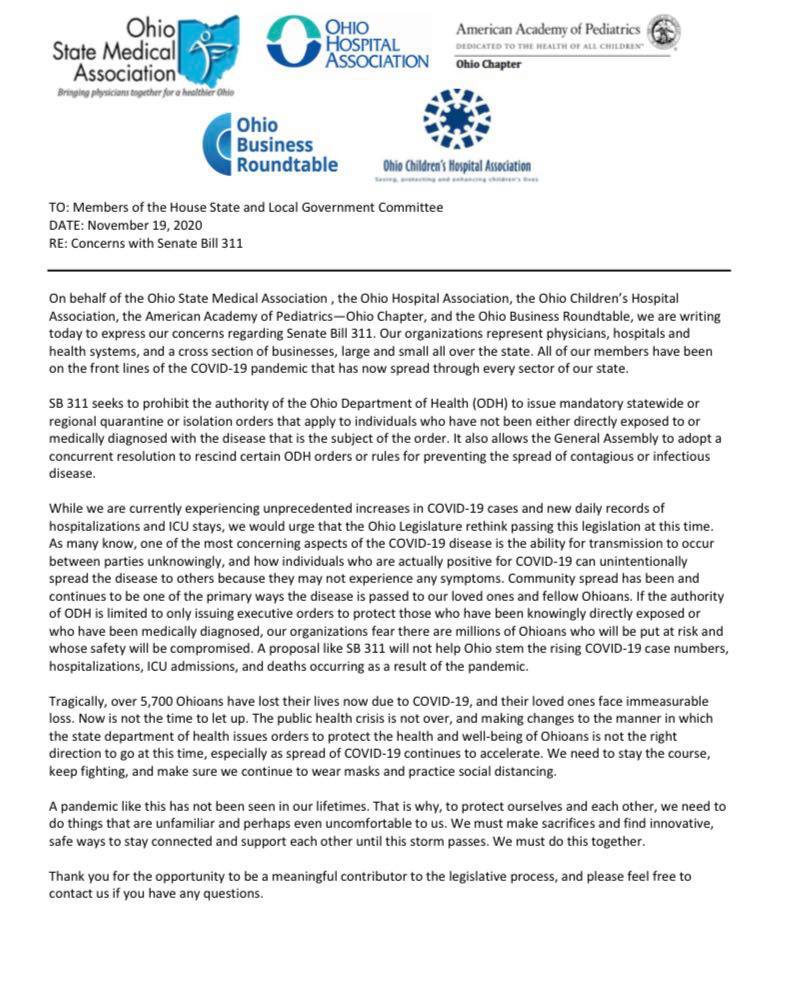 The OHA is represented by Scott Borgemenke, charged with lobbying on behalf of the association.  The Ohio Business Roundtable is led by former U.S. Congressman, Pat Tiberi.  Tiberi is President and CEO of OBR.

Both Borgemenke and Tiberi were present at a meeting earlier in November with Speaker Bob Cupp and Ohio State Representative Bill Seitz (R-Green Township).

Two representatives who are known by this Star reporter asked for anonymity for safety and security reasons.  Both representatives told The Star that Representative Seitz was interested in opposing Cupp for Speaker of the Ohio House of Representatives –  a role that was up for consideration after the November 3 general election.

Of Borgemenke, Tiberi, Cupp and Seitz, only Seitz returned a call from The Star.

During the phone interview with Seitz, the Representative was asked why lobbyists were involved in discussions involving the upcoming caucus vote on the Speaker seat.

Seitz said that was not the intent of the meeting. Rather he had met with Cupp two times prior and during this meeting “everyone agreed that Borgemenke and Tiberi would mediate” the discussion.

Seitz said the meeting was held to discuss and achieve three objectives:

Seitz said that Cupp is not a “shoe-pounding personality” and that people may be concerned that he is in DeWine’s corner. However, Seitz said it is the “will of the caucus to rectify executive overreach.”

OBR spokesperson Rob Nichols did return a call to The Star and in and was asked why the OBR didn’t support SB311 and he said “the letter speaks for itself.”