“You just get to play a team like Kentucky so rarely,” Mooney continued. “I’ve been coaching for a long time and this is my first time playing against Kentucky. So for us to have the opportunity to play them with a great team is great, and we seized that opportunity.”

Richmond was led in scoring by guard Blake Francis and forward Nathan Cayo with 18 points each and received valuable contributions from the other three starters, specifically point guard Jacob Gilyard who, even with poor shooting numbers, was really able impact the game with six assists, five steals and four rebounds. 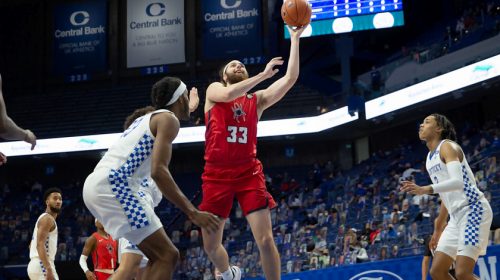 After the game, Mooney specifically praised Cayo, who was named most valuable player of the showcase, for being a nearly unstoppable force on the offensive end so far this season.

During a first half that was largely back and forth between the two teams, Richmond shot 28.6 percent from the floor, making just ten of their 35 attempts, and picked up many early fouls. Going into the break, however, the Spiders only trailed Kentucky 32-28.

“We were only down four at half time and we felt like we played horrible. We didn’t make any shots,” forward Grant Golden said postgame. “We knew as long as we kept running our offense, shots were going to fall eventually, but it was really all on the defensive end for us and we put two really good halves of defense together and that’s what ended up winning it for us.”

The Spiders were able to find its rhythm offensively in the second half, shooting 59 percent from the floor, and eventually pulled away from the young Wildcats team. Richmond broke off a 9-0 run to take a three-point lead early on and then a 12-2 run with just under eight minutes left to go up 58-46.

Cayo put the finishing stamp on the game with an and-one dunk over two Kentucky defenders to give Richmond a 69-56 lead with 1:24 remaining.

One stat that went in Richmond’s favor and helped secure the victory even while getting out-rebounded and inconsistent shooting was turnovers. Kentucky had 21 turnovers to Richmond’s ten. 11 of those turnovers came in the second half and resulted in 22 points for the Spiders.

For Kentucky, who started four freshman and senior transfer Olivier Sarr, their inexperience showed at times while playing the polar opposite in Richmond with its swath of experienced upperclassman and graduates.

Overall, Kentucky had a poor second half in which they did not record an assist and shot 31 percent. The wildcats also did not make a three during the game.

Exciting freshman Brandon Boston Jr. led the Wildcats with 20 points, while Sarr had 17 points and 11 rebounds.

With a lot of hype and excitement going into the season as the project No.1 team in the Atlantic 10 Conference, Sunday’s win helped validate the belief that Richmond is not only one of the favorites to finish first in the league, but also has a chance to make a deep run in the NCAA Tournament come March.

“We’re confident. We’re confident that we deserve to be [here],” Gilyard said. “We felt coming in that we had been slighted all year. With Nick [Sherod] being out we felt like people were underestimating us. We’ve got guys that can play and everybody is going to step up.”

After receiving 40 votes to be in the top-25 last week, the win – one of the best ever for the program – will most likely vault Richmond into the Associated Press rankings when they are released. On the other side, Kentucky will almost certainly fall out of the top-10 after this loss.

Richmond travels to South Carolina next to play College of Charleston on Wednesday. The Spider’s next matchup against a ranked opponent will come against No. 11 West Virginia on December 13.

Jacob Taylor is a reporter at The Virginia Star and the Star News Digital Network. I am a 2019 graduate from the University of Richmond and covered the men’s basketball team for the university’s student newspaper during my team in school.  Follow me on Twitter. Email tips to [email protected].