More than half of Minnesota renters surveyed recently by the U.S. Census Bureau say they’re either “somewhat likely” or “very likely” to face eviction in the next two months.

This data comes by way of the bureau’s most recent Household Pulse Survey, which regularly collects information about American households. The bureau cautions that data collected by these surveys are considered “experimental” and “sample sizes may be small and the standard errors may be large.”

The most recent survey of Minnesotans revealed that of 106,112 renters, only 34,173 said they’re “not likely at all” to be evicted during the next two months. Another 16,889 report that they’re “not very likely” to lose their homes, while 39,335 and 15,716 report being “somewhat likely” or “very likely” to experience eviction.

This means that only 32% of Minnesota renters feel totally secure in their current living accommodations, as indicated by a “not likely at all” response to the eviction question. Even this seemingly low number is better than the national average, according to the most recent Pulse Survey, which indicates that only about 21% of American renters are “not likely at all” to lose their homes.

However, only 49% of U.S. citizens say they’re “somewhat” or “very likely” to be evicted, compared to Minnesota’s slightly higher 52%. 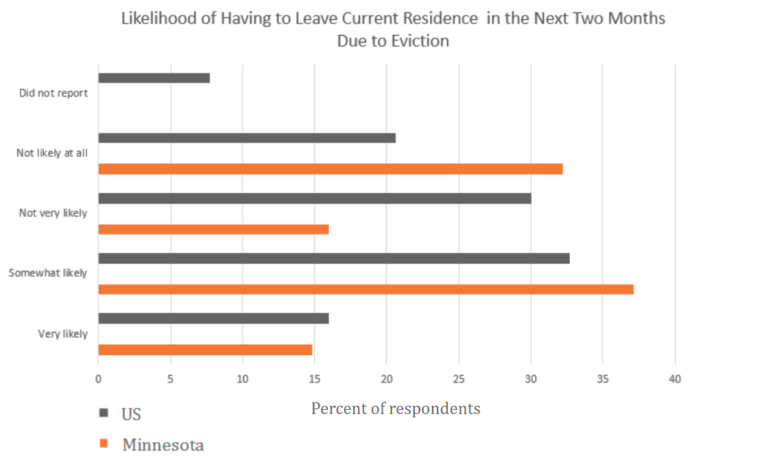 About 5.8 million total adult renters in America are at least somewhat likely to be evicted, per the recent Pulse Survey. This represents roughly 60% of those who are presently behind on their rent or mortgage, according to a CNN report that said 9.9 million Americans are behind on these payments.

Evictions in Minnesota as a result of unpaid rent are still banned under an executive order from the governor.