The coronavirus vaccine has finally arrived in the Commonwealth of Virginia.

Several hospitals in Virginia received initial shipments of the newly approved Pfizer-BioNTech COVID-19 vaccine this week, kicking off the state’s months-long plan for mass vaccinations and finally signaling a potential end to the pandemic. 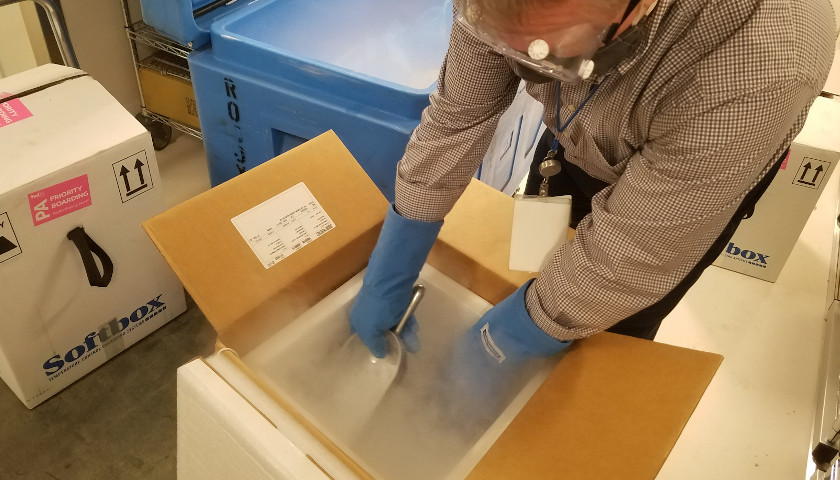 “These initial doses of the COVID-19 vaccine are a much-needed symbol of hope for our Commonwealth and our country,” Governor Ralph Northam said in a statement. “With this remarkable medical achievement, we are beginning to see the light at the end of a long, dark tunnel.”

“Yet even in this moment of celebration, we must remember that this is the first step in a months-long process to receive, distribute, and administer the vaccine as it becomes available,” the governor added. “I ask everyone to stay vigilant, take care of each other, and continue following the public health guidelines as we work to vaccinate Virginians in a safe, efficient, equitable manner.”

On Monday, Northam welcomed the first shipment at Bon Secours hospital in Richmond, while Sentara Healthcare, based in Norfolk, announced they had received their own supply of the vaccine.

A spokesperson for Bon Secours said the hospital had received 4,875 initial doses on Monday.

Sentara, one of the largest healthcare systems in the state with 11 hospitals, was sent 11,700 doses and will be sharing the limited supply across the entire system, Sentara spokesperson Lauren Patton told The Virginia Star.

Bon Secours, Sentara and VCU are not the only ones to get the vaccine, however. According to CBS 6, the Virginia Department of Health (VDH) said 18 healthcare systems across the Commonwealth will receive shipments this week. Those being facilities that have ultra-cold freezer capabilities to properly store the vaccine.

The VDH announced earlier this month that the state is supposed to be getting 72,150 doses of the Pfizer vaccine in these first shipments, which was approved for use by the Food and Drug Administration on Friday, and expects a total of 480,000 doses by the end of December if Moderna’s vaccine is also given emergency-use authorization.

Under Virginia’s vaccination plan, front-line healthcare workers who are most vulnerable or have been directly treating patients with the virus as well as residents and staff of long-term care facilities are the groups with the highest priority for vaccinations.

The 480,000 vaccine doses would cover almost all of Virginia’s estimated 500,000 healthcare workers and long-term care facility residents and staff, according to the VDH.

Bon Secours said it started administering vaccinations to its healthcare personnel around noon on Tuesday. Sentara said they set up a clinic and began vaccinating its COVID patient units, among others,  early Tuesday afternoon and that employees at other sites will get their injections later this week.

The entire first shipment will only go to healthcare personnel initially. Then, as more shipments are received weekly, doses will be divided between the two priority groups. Long-term care facility residents and staff will receive their vaccinations at specifically set up clinics from CVS and Walgreens teams through a federal partnership with the Centers for Disease Control and Prevention, the VDH said.

Currently, Virginians are not required to receive a COVID vaccine.

The nationwide vaccination process in the United States officially began on Sunday when trucks carrying the vaccine left a Pfizer plant in Michigan. Now, many other states besides Virginia have received shipments of the vaccine this week, such as Tennessee and Ohio, and can finally start the long journey toward herd immunity.