Governor DeWine unexpectedly called a press conference on Monday.  It was the day the Pfizer vaccine arrived in Ohio and DeWine called it “historic,” our “hope” and the “beginning of the end” of COVID.  A video of he and First Lady Fran DeWine can be viewed below as the vaccine shipment arrives via UPS.

During the Monday briefing, The Ohio Star asked DeWine about his alleged ties to drug maker Pfizer.

Governor, from a viewer, a two-part question regarding your potential ties to drug makers:

First, do you own stock in Pfizer and Moderna – and did these companies contribute to your campaign pre, and post, gubernatorial fund?

Second, many people have diversified holdings in pharma, so that would be understandable but in the past as a U.S. Senator you received criticism for approving immunization for drug makers from accountability for harm their drugs do – while holding pharma stock. As Ohio Attorney General you received criticism for stock in companies that an AG’s legal action could affect the value of – now as governor, do you see it as a conflict of interest – holdings and contributions – since you are a primary policymaker and have encouraged millions of Ohioans to take vaccines from companies you may have ties to?

The Star obtained copies of Governor DeWine’s 2017, 2018 and 2019 Financial Disclosure Statements and found that he does, indeed, own common stock in Pfizer– not a mutual fund containing shares of the company.

The disclosure does not list the value of the shares but it is greater than $1,000 if it is listed in the report.

The governor also owns stock in GlaxoSmithKline (GSK), Johnson & Johnson, Merck & Co., and Novartis.  All of the companies are currently developing COVID vaccines or drugs.

Furthermore, DeWine owns shares of Mesa Labs.  The company, according to their website, “provides safety related products we offer to the pharmaceutical, healthcare and medical device industries at the forefront of the COVID-19 situation.”

DeWine did not pick up the drug stocks this year but has held them since at least 2017.  The 2020 Financial Disclosure Report will not be available until 2021.

The Ohio Secretary of State website (which you can search here) reports DeWine and Lt. Governor Jon Husted received a $12,700 contribution from Pfizer PAC made to the DeWine Husted for Ohio fund June 14, 2018.

The secretary’s site also shows that the DeWine and Husted Transition Fund received a contribution from Pfizer Inc PAC on January 3, 2019 in the amount of $10,000. 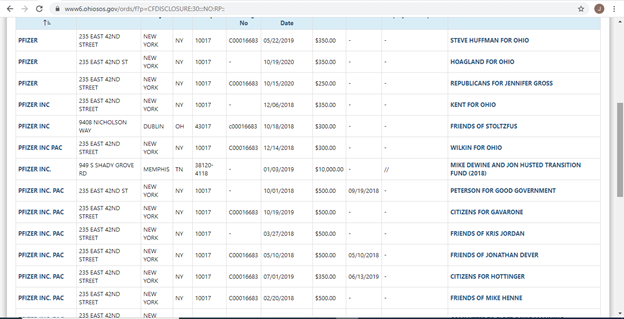 Pfizer has made several contributions to Republican and Democrat candidates and elected officials, according to the secretary of state.

Most of those contributions are below $500. Contributions of $1,000 were reserved for Speaker of the House Larry Householder and Senate President Larry Obhof.

Interestingly, Pfizer made $1,000 contributions on October 26, 2020 – eight days before the general election – to both the Matt Huffman for Ohio Fund and the [Bob] Cupp for State Representative Committee.  After the election, Cupp was re-elected Speaker of the Ohio House and Huffman selected as President of the Ohio Senate. 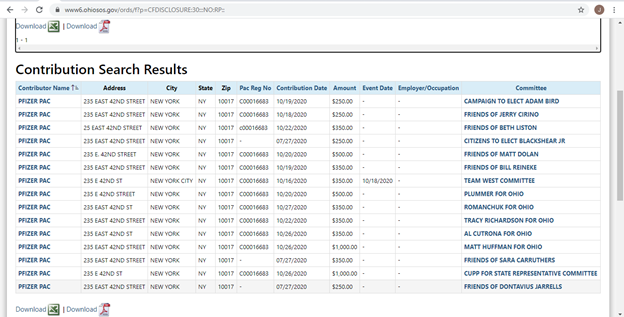 The Star previously reported on the meeting in late October between Cupp (R-Lima) and Bill Seitz (R-Green Township) that was attended by a lobbyist from the Ohio Hospital Association Scott Borgemenke.  The meeting was also attended by lobbyist and President of the Ohio Business Roundtable Pat Tiberi.

Two Ohio House Representatives who asked to remain anonymous for fear of retribution told The Star the meeting was to coax Seitz out of an alleged interest he had in vying for the speaker seat.

Whether a deal was struck for the speakership that day cannot be determined. Nor can the notion that a deal was cut for the president’s seat in the Senate.

However, the contributions from Pfizer prior to the election look as if Pfizer received word about who would eventually lead in the next General Assembly.

Cupp eventually ran unopposed in the speaker vote. Cupp has been criticized by conservatives who do not favor Governor DeWine for being a DeWine “lapdog,” a moniker one Statehouse representative used when talking with The Star.

The Ohio Hospital Association and the Ohio Business Roundtable both signed on to a letter addressed to the House Committee on Local and State Government, which was deciding on the merits of Senate Bill 311 (SB311) – the legislation would decriminalize COVID order violations and check the Ohio Department of Health pandemic powers.  The letter advised the committee to not pass the bill.

Last week, DeWine appointed Scott Borgemenke to the Ohio University Board of Trustees.

Since the governor’s veto, Senate Bill 311 has lost steam in the Senate where Obhof puffed-up early about having the votes to override.  Obhof later backed off the promise to override, and began marketing a compromise.

Before the bill went to the governor it was voted on in the House during which time three members were absent– members who allegedly would have voted for the bill, giving it a veto-proof 61 votes.

State Representative Jon Cross (R-Kenton) told The Star that the speaker could have left the vote open for those unable to attend to initially cast votes, presumably allowing the first vote to be veto-proof.

Had the bill obtained 61 votes in the House, the governor’s veto wouldn’t have mattered because SB311 passed the Senate the first time with a veto-proof 20 votes.

DeWine said during the regularly scheduled Tuesday briefing that he met with Obhof and Cupp over the weekend to negotiate and that he would be willing to decriminalize violations of Ohio Department of Health (ODH) orders but made it clear that he stands opposed to the ODH having its power checked – giving bureaucrats the authority to continue quarantining healthy Ohioans.

The governor’s full press briefing can be viewed below.