From launching recall petitions and rallying against their fellow representatives in November, to earlier this month ousting some of them from subcommittees or the entire assembly, these activist student government members say they are motivated to set right what a “white-cis-het” group of their peers did in voting down the disarmament resolution. 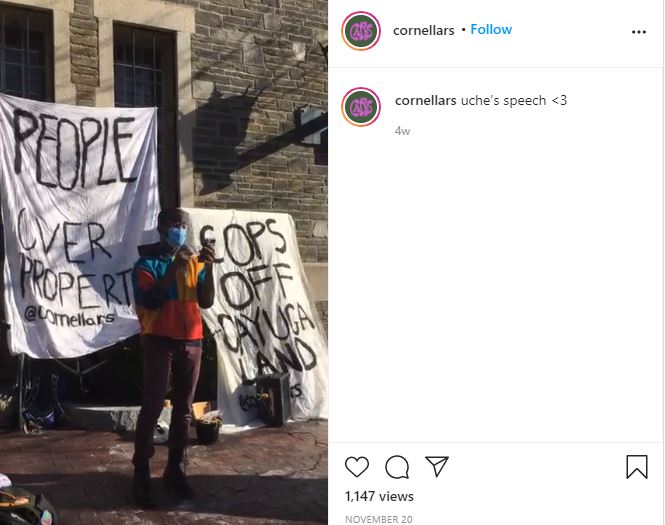 “These 15 student assembly members watched us pour out our traumas and fears on the floor practically begging them two vote no, and finally send a message to the university that we can no longer allow these oppressive institutions to keep us down,” said Uchenna Chukwukere, the Student Assembly vice president of finance, at a protest rally in mid-November.

“Many of these assembly members are white-cis-het men and women who quite literally laughed and danced in our faces when the resolution failed,” Chukwukere said.

“Their faces are all over social media,” he added. “We will never forget. … Their campus careers are over. … We must disarm, defund, and disband the Cornell University Police Department.”

In the days following the initial failure of Resolution 11, vulgar language and threats of violence were directed at student assembly representatives who opposed the bill. Comments on social media obtained by The College Fix from students include:

“I would beat up Zion if I saw him but all these white men looked the same.”

“As a fellow Indian, I don’t claim Sonu Kapoor. India’s theory lies in egalitarianism. I would like to pass her on to the Pakistani folks.”

After weeks of intimidation, online harassment, and ultimately, the removal of several student representatives who supported keeping campus police armed, the assembly’s activist faction was able to approve on Dec. 10 a new measure, Resolution 30, calling to disarm campus police.

It passed 15-1-13 despite some members opposed to the bill who left the meeting before the vote in an attempt to reduce attendance below a quorum, the Cornell Daily Sun reports.

After weeks of discord and online attacks, the Student Assembly passed a resolution to disarm Cornell Police, proposing that the department lose access to lethal weapons. Previously, the resolution narrowly failed to pass almost one month ago. https://t.co/deDuU80yEU

“Under the resolution, which will now go to President Martha Pollack, disarmament would mean revoking the Cornell University Police Department’s access to lethal weapons,” the Sun reports.

In a letter to the editor of the Sun, the student representatives under fire for refusing to support disarming the police denounced the attacks against them, saying these activist student government representatives are using “existing, but unenforced, S.A. rules on attendance and committee membership in order to remove members who voted no on Resolution 11.”

“These actions are undemocratic, authoritarian and a flagrant abuse of the S.A.’s rules and procedures,” the Dec. 9 letter states. “It goes without saying that these efforts are unprecedented.”

“A vocal minority of the S.A. who believe everyone must think as they do has attempted to strip power from anyone who disagrees with them and browbeat them into silence,” it adds. “Their actions have created a hostile, toxic and untenable atmosphere within the S.A., hampering its ability to function and causing unnecessary anxiety and emotional distress to its members.”

Part of the tensions during the initial vote back in November included racial ones.

Student Dakota Johnson, a veteran of the U.S. Marine Corps who attended a November SA meeting to express his opposition to disarming police, was told during the hearing by Moriah Adeghe, the SA director of elections, that “As a white man, you cannot be the arbiter of what is and isn’t racist and who is a good or bad person. … You will never be the arbiter because you are a white man.”

In a comment to The College Fix, Johnson stated, “I’ve never felt more discriminated against based on my skin color than I did in that moment, and it’s just downright sad and disappointing that there are people that think like that in the SA. I know for a fact that we as a student body can elect better quality individuals for these positions in the future.”

Johnson was not the only student who was chided for his white skin by Student Assembly members, according to Young America’s Foundation, a conservative group that “combed through hours of footage from several weeks of student government meetings.”

“The chair of the student government, Cat Huang, agreed to call on minority students over white students after one representative said ‘I want them to like have their voices be amplified before white people start talking,’” YAF reported.

“Another representative, Uche Chukwukere, told one student that “when a black woman is speaking you do not interrupt her.” He then went on to attack the student, saying “You are a white man. You cannot tell me how I’m supposed to feel around CUPD,’” the foundation reported.

College Fix contributor Joe Silverstein attends Cornell University. He studies government and applied economics. Joe is the editor-in-chief of The Cornell Review, and has been published in Legal Insurrection, the Staten Island Advance, and various other media outlets.
Photo “Defund the Police” by Eden, Janine, and Jim CC2.0.