Virginia’s statue of Confederate General Robert E. Lee was removed from its place in the National Statuary Hall of the United States Capitol by a crew of workers overnight.

Every state is allowed to have two statues on display in the hall and Lee has stood along with President George Washington as representatives of the Commonwealth since 1909.

“We should all be proud of this important step forward for our Commonwealth and our country,” Virginia Governor Ralph Northam said in a news release. “The Confederacy is a symbol of Virginia’s racist and divisive history, and it is past time we tell our story with images of perseverance, diversity, and inclusion.”

U.S. Senator Tim Kaine (D-VA) and U.S. Representative Jennifer Wexton (D-VA-10) were at the Capitol in the early morning hours when the statue was being taken down. Kaine posted a video of the removal hours later on Twitter.

The removal of Lee, a figure some deem as divisive and others as a cemented part of history, has been anticipated for several months now.

Earlier in the year, Northam signed legislation that created the Commission for Historical Statues in the United States Capitol, which was tasked with determining whether or not the Lee statue should be removed and if so come up with a replacement.

The eight-member panel unanimously voted to remove the statue in July and then recommended it be moved to the Virginia Museum of History and Culture in Richmond, which has now agreed to take ownership.

On Wednesday, the commission voted 6-1 to recommend a statue of teenage civil rights icon Barbara Rose Johns as the replacement for Lee.

“The Commission has undertaken a very thorough and deliberate process to select a historical figure who represents the values of today’s Virginians,” commission member and Senate President Pro Tempore Louise Lucas (D-Portsmouth) said in a release. “I thank the members for their dedication and determination to reach this difficult and impactful decision.”

Johns is heralded for staging a student walkout in 1951 at Robert Russa Moton High School in Farmville as a 16-year-old to protest the unequal and substandard conditions of the all-black school compared to schools attended by white students in the area. John’s court case ended up being one of five cases considered by the United States Supreme Court in the landmark Brown v. Board of Education of Topeka ruling, according to a release. 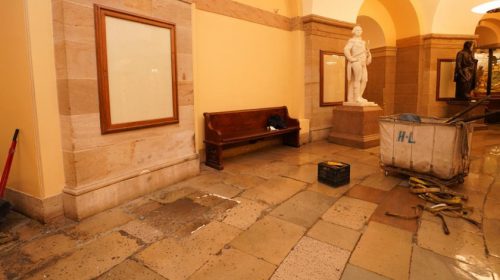 The commission chose Johns from a group of five finalists that included: Oliver Hill, a civil rights attorney and activist; Pocahontas; John Mercer Langston, Virginia’s first African American elected to Congress; Johns and Maggie Walker, the first black woman to establish and become president of a bank in the U.S.

“When I think of Barbara Johns, I am reminded of how brave she was at such a young age,” Del. Jeion Ward (D-Hampton), one of the commission members, said in a release. “It’s time for us to start singing the songs of some of the Virginians who have done great things that have gone unnoticed. This is a proud moment for our Commonwealth, and I am humbled to have been a part of it.”

The General Assembly will have the final vote on whether or not to authorize a statue of Johns as the replacement for Lee when it convenes on January 13th. Last week, Northam allocated $500,000 for Lee’s removal in his budget recommendations.

The year 2020 has not been particularly good for Lee, especially since the death of George Floyd by police in Minnesota helped push a strong rebuke of any Confederate symbols in Richmond and other places throughout the South.

During protests over Floyd’s death, the large monument of Lee on Richmond’s Monument Avenue was transformed by spray paint messages and became a focal point for demonstrations. In June, Northam ordered the statue be taken down, but several nearby residents filed suit to block the removal.

In July, Richmond Mayor Levar Stoney ordered the removal of all confederate statues or monuments on city-owned land. Later in the month, House Speaker Eileen Filler-Corn (D-Fairfax County) had a statue of Lee and busts of other Confederate generals quietly removed from the state capitol, which resulted in a lawsuit.

Additionally, roads and streets named after Confederate figures have been changed and even Washington & Lee University, the place where Lee is buried, has considered adjusting its name.