The New York Times bungled an attempted hit piece on The Star News Network and the Georgia Star News, and was forced to make several corrections within hours of the story’s publication on Tuesday.

The Times, however, failed to make all the factual corrections requested by Star News Digital Media, which owns and operates the Georgia Star News, part of its Star News Network.

In fact, The Times’ story, which includes four paragraphs on the Georgia Star News, does not link to a single article published at that site, including any of the following examples of groundbreaking original reporting there:

Early in their article that includes references to The Georgia Star, the duo cite a study by Avaaz. Founded in 2007, records show Avaaz received $25 million in funding in 2019. A self-described global human rights activist group, the 501 (c) (4) was started by a group of like-minded activists from organizations including Moveon.org, the labor union SEIU, among others.

Alba posted the story to her Twitter page shortly after its publication, with the story’s original headline: 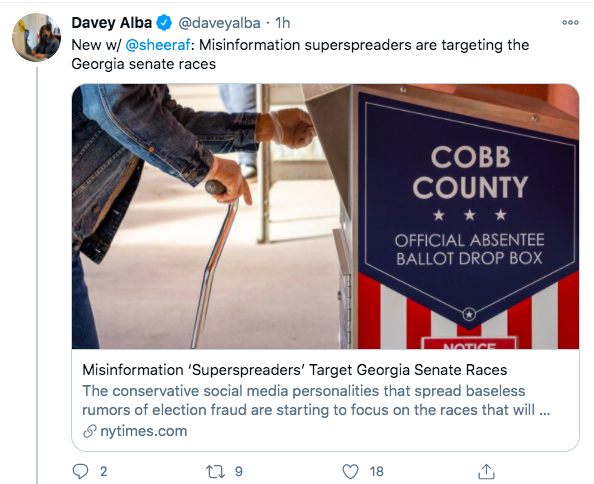 About an hour after publication, The Times changed its headline without explanation, dropping the reference to COVID-19, and replacing it with “Misinformation Amplifiers”: 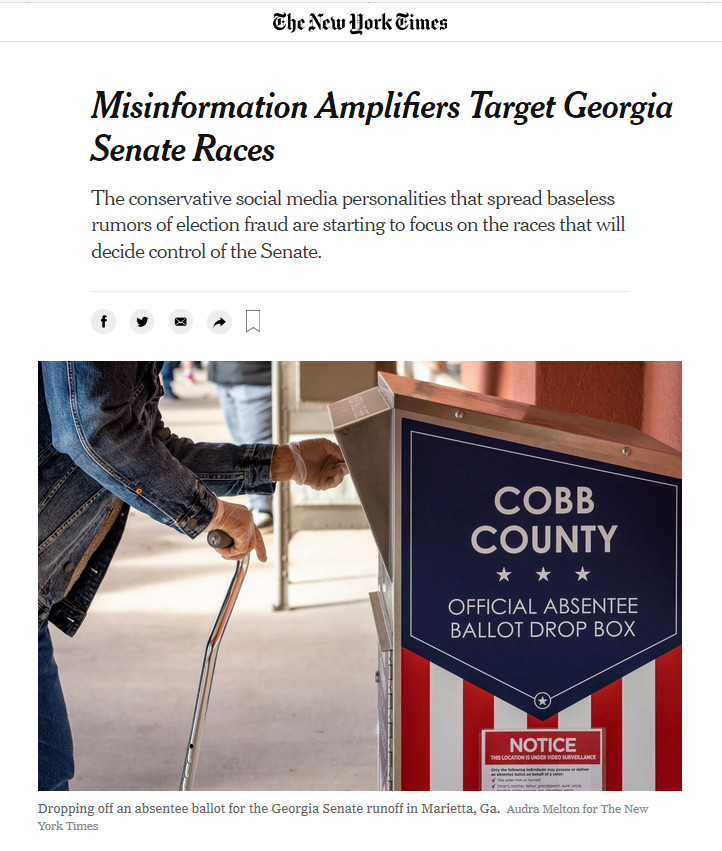 The Times’ own guidelines for integrity, “No subject should be taken by surprise when the paper appears, or feel that there was no chance to respond.”

“We’ve read the recent headlines on the site and found that some shared misleading information about the presidential election in Georgia and the upcoming runoff, including about possible widespread voter fraud in the state,” Alba said by email Monday afternoon. “According to an assessment by NewsGuard, The Georgia Star News fails to present information ‘responsibly’ and falls short at ‘avoiding deceptive headlines.'”

Alba also wrongly claimed that NewsGuard is “a start-up that examines false stories,” when in reality it is a browser extension that rates the reliability and trustworthiness of websites as a whole.

As of press time, NewsGuard has not reached out to The Star News Network about The Georgia Star News.

Henry said the following about Ossoff and Warnock, both of whom support abortion:

“What I’ve seen concerning Jon Ossoff, who is very quiet on many issues, is that’s not someone I could personally endorse or support. And concerning Raphael Warnock, and the stances that he’s been adamant about, [he’s] clearly anti-Biblical [and he] goes against my values. And so I want to appeal particularly to Black Georgians, as well as Georgians at large who share Christian values, is to vote your values. Don’t be moved by headlines and creative speaking, and don’t be moved someone who just matches the color of your skin tone. Because you’re a better person that that, I believe. I believe you’re an intellectual person. I believe you’re a person of substance who doesn’t just get moved by their emotions.”

Alba objected to The Star News’ characterization of Henry’s comments in the December 19 story.

“A Dec. 19 story on the website, for example, stated that a coalition of Black ministry leaders rebuked Democratic candidates Warnock and Ossoff for stances that ‘hurt the Black community,'” she said in her email asking for comment. “But the conservative ministry leaders seem to be anti-abortion and opposed Mr. Warnock and Mr. Ossoff for not explicitly standing against abortion. Still, the headline might have the effect of turning off the candidates to Black voters.”

But Alba inexplicably ignored her own line of questioning in The Times’ Tuesday report, and did not report at all on The Star News’ December 19 story.

Instead, she reported on a December 5 story where The Star News quoted a witness – a registered Independent – who alleged that 37 votes in Ware County, a county that uses Dominion voting machines, were incorrectly assigned to Joe Biden instead of President Donald J. Trump.

The Times claimed that The Star News story was factually incorrect by citing its own report from November 11 about a lack of evidence of widespread voter fraud among Dominion machines.

But The Star News never claimed there was widespread evidence of fraud in its December 5 story, only that the 37 votes processed by Dominion voting machines in that specific county were wrongly assigned to Biden.

Alba failed to ask for a comment about The Star News’ December 5 story.

Worth noting, though, The Times had its own concerns of voter fraud in 2012, when President Barack Obama was up for re-election, and the use of absentee ballots were on the rise.

“Error and Fraud at Issue as Absentee Voting Rises,” said a Times headline from October 6, 2012, just one month before that year’s presidential election.

“Election experts say the challenges created by mailed ballots could well affect outcomes this fall and beyond,” that story said.

“While fraud in voting by mail is far less common than innocent errors, it is vastly more prevalent than the in-person voting fraud that has attracted far more attention, election administrators say,” it continued.

More Americans voted by mail during the 2020 election than any other election in American history.

After The Star News pointed out the multiple factual errors in The Times’ piece and provided examples of factual news reporting on voting irregularities and legally-questionable voting practices in the state of Georgia – including some that have been critical of Republicans – Alba conceded to some of the paper’s shoddy reporting.

“We are printing your response that NewsGuard’s assessment includes ‘subjective, nonspecific generalizations that lack any meaningful context’ and that you ‘reject their assessment as baseless,'” she said in an email response. “We are also noting that the title of your publication is ‘The Georgia Star News,’ not ‘The Georgia Star.’ Additionally, we are noting that a witness for President Trump’s legal team alleged that an audit of election results found that voting machines flipped ballots.”

However The Times’ has not yet followed through on Alba’s assurances. At press time, the passages containing mention of The Georgia Star News state:

Voters in Georgia are also being targeted with misleading information by new media start-ups. A conservative local news network, Star News group, which already runs news sites in Tennessee, Virginia and Minnesota, announced in November that it was opening a venture called the Georgia Star News, according to the liberal media watchdog group Media Matters for America.

Since then, the website has published misleading news about the presidential election and the coming runoff election, according to an assessment by NewsGuard, a start-up that examines false stories.

The Georgia Star News said in a response that NewsGuard’s assessment included “subjective, nonspecific generalizations that lack any meaningful context” and that it “rejected their assessment as baseless”

A Dec. 5 headline promised a “bombshell” story, reprinting an allegation that an audit of election results in a Georgia county revealed that Dominion voting machines flipped ballots from Mr. Trump to Mr. Biden, in spite of overwhelming evidence to the contrary.

The article was shared more than 2,000 times on Facebook, according to CrowdTangle data, reaching up to 650,000 people on the social network.

At appending the end of the report is:

“It’s the daily double of hypocrisy and irony that the kingpin of fake news,” The New York Times, spins yarns about disseminating misinformation,” he said.

“The public confidence in the accuracy of Times reporting is below that of Congress and used car dealers. Our reporting in the Georgia Star News has shined a light where there is darkness and is rooted in facts and truth. I can see where the New York Times is threatened by that,” Fredericks added.

“They exist to protect Joe Biden’s fantasy election,” Fredericks said. “We exist to bring facts and real news to our growing legion of enlightened readers.”

Alba’s biography at The Times says she is a “reporter covering online disinformation and its global harms.” She has previously written at a who’s who of leftist news outlets, including BuzzFeed, Wired, and Gizmodo.

Frenkel, a San Francisco resident, was a foreign correspondent for left-wing BuzzFeed and NPR among others before joining The Times, according to her biography.

She is the co-author of a book about Facebook, titled “The Ugly Truth,” scheduled for publication in June 2021, which claims  “under the leadership of Mark Zuckerberg and Sheryl Sandberg, one of the most powerful companies in the world tried to deny a damning fact—that Facebook has become a conduit for disinformation, hate speech, and political propaganda—while continuing to relentlessly pursue growth.”

In October, Alba accused conservative commentator Mark Levin, among others, of spreading “misinformation” which could lead to violence on Election Day.

“A disgusting hit job was just published by leftwing New York Times hack Davey Alba, who’s trying to lay the radical left’s threats of election day violence on me, Dan Bongino, and others,” he said.

“Of course, one Democrat leader and liberal media type after another have been talking about using the military to remove President Trump. But Dan and I have not promoted violence. I have mocked the Left’s threats and sarcastically turned the tables in a single post,” he said in a second Tweet.

2. Of course, one Democrat leader and liberal media type after another have been talking about using the military to remove President Trump.  But Dan and I have not promoted violence. I have mocked the Left’s threats and sarcastically turned the tables in a single post.

“Alba knows this but she writes a disgusting hit piece anyway. I’ll address this on radio tomorrow,” he said in a third Tweet.

3. Alba knows this but she writes a disgusting hit piece anyway.  I’ll address this on radio tomorrow.  But Dan does an excellent job on his Twitter site tracking down this sleazy reporter’s ties.https://t.co/Mv4TPjM5hB

Alba’s claim itself turned out to be “misinformation.” There was no violence on Election Day.

Just last week, The Times, was forced to issue a retraction of an entire podcast series called “Caliphate” after it found it had been duped by the series’ protagonist, a Pakistani man living in Canada. The man, who called himself Abu Huzayfah, claimed he was a member of ISIS who had killed people on behalf of the Islamic State in Syria. Canadian police arrested Huzayfah, whose real name is Shehroze Chaudhry, in September. He was charged with “perpetrating a terrorist hoax.” Police said the stories about his ISIS membership were completely fabricated.

In its official guidelines for integrity, The Times also claims that “the journalism we practice daily must be beyond reproach.”

“No one needs to be reminded that falsifying any part of a news report cannot be tolerated and will result automatically in disciplinary action up to and including termination,” the guidelines say.

Pete D’Abrosca is a contributor at The Star News Network. Follow Pete on Twitter. Email tips to [email protected]