Ohio purchased 2 million doses of arguably the most controversial drug being touted as an effective therapy in treating COVID – the spend totaled $602,629.

Consequently, when the rumor that the American Medical Association (AMA) reversed course on their April joint statement warning about the prescription of HCQ, Ohioans took note – especially since a review of clinical studies found that early dispensation of the drug may help keep patients form worsening in their battle with COVID, which would alleviate pressure on hospitals concerned about capacity.

The AMA considered issuing a new statement on the controversial drug Hydroxychloroquine (HCQ) when its House of Delegates met in November.

However, in a phone interview with Robert Mills, AMA’s media relations coordinator, The Ohio Star learned the AMA statement released on April 17 was not reversed.

“Over the last weekend reports the AMA rescinded its joint position statement on hydroxychloroquine are misinformation or disinformation,” said Mills.

Rush Limbaugh’s claim on December 15 that “Now all of a sudden the AMA — although very quietly — [says] that hydroxychloroquine is okay. It’s perfectly fine” appears to come from a December 11 article found in independent news outlet The Published Reporter has since been updated to include an correction and editors note clarifying the medical body was considering the change. The correction notice says, in part:

A previous version of this story did not include the meeting results for either ADOPTION or NON-ADOPTION of the resolution. This RESOLUTION was included with many others presented at a Special Meeting of the AMA in November 2020. RESOLUTIONS are generated by AMA delegates/delegations, the AMA Board of Trustees, AMA Councils and AMA Sections. The RESOLUTION must be accepted and this resolution was not accepted. The RESOLUTION was reaffirmed. See the disclosure on this page referencing items to be considered by the House.

Mills pointed out that the crux of confusion that caused the mis/disinformation is likely parliamentary procedure followed in the AMA House of Delegates – the assembly that approves statements. 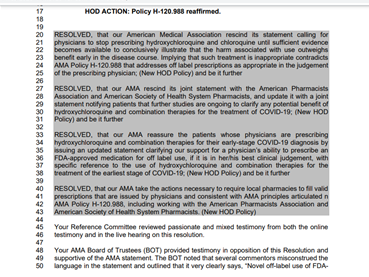 Mills discussed the use of the word “resolved” that was used in Resolution 509, the proposal put together by a Georgia assembly that sought to rescind the earlier joint statement.

“That may be where those scouring the AMA documents mistook that the proposed resolution had been accepted – yet it wasn’t,” said Mills.

The April resolution stated, “[w]e are aware that some physicians and others are prescribing or dispensing medications currently identified as potential treatments or prophylaxis for COVID-19 (e.g., chloroquine or hydroxychloroquine, azithromycin) for themselves, their families, or their colleagues.”

Later the joint statement crafted by the AMA, American Pharmacist Association and American Society of Health-System Pharmacists declares “[d]efinitive evidence for the role of these drugs in treating COVID-19 patients has not been determined through robust clinical trials; decisions to use these medications off-label must be made with extreme caution and careful monitoring.”

Mills said the joint statement affirmed that doctors and pharmacists have the wherewithal to make decisions on an individualized basis and communicate with patients the benefits and risks of drug treatments. Mills added that the authority of physicians to make decisions regarding off-label decisions has “been around a long time” and that the joint statement supported physicians exercising their professional judgment.

When The Star asked how widely or narrowly Resolution 509 was voted down, Mills said the November meeting was the first virtual meeting, consequently the AMA does “not have a final tally of the vote.”

However, Mills disclosed that proponent and opponent testimony was presented and weighed before the vote.

The results of a clinical trial are due to be published in December revealing the effectiveness of HCQ combined with zinc, azithromycin or doxycycline.

The Star reported that studies examining the efficacy of HCQ focused the 70-year-old drug’s success in treating patients with advanced COVID despite preliminary evidence it was effective when administered early.