Organizers of this event, which they called the March for Trump, also made plans to travel to Washington, D.C. on Wednesday to support Trump in person.

Amy Kremer, founder of Women for America First, told the crowd that she’s hosting a March for Trump Bus Tour across America.

“The more of us who show up [on Wednesday] the less likely they will do anything to us. They are not going to overpower us. We are going to fill that city. The mayor can shut down the restaurants and the streets, but you will not stop us from coming to Washington, D.C.” 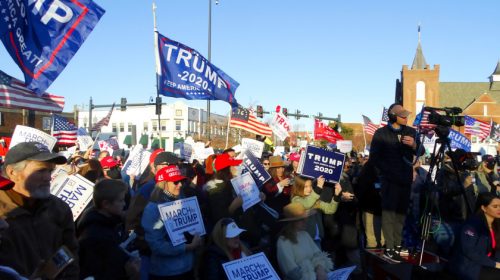 U.S. Rep. Mark Green (R-TN-07) could not attend Sunday’s rally as he was in Washington, D.C. for the start of the new session of Congress.

But Myra Simons, who works for Green, read a letter to the crowd that she said Green tailored specifically for them.

“The integrity of our elections is paramount to our country. That is why I have been sounding the alarm on the potential for mail-in ballots to increase voter fraud for almost a year in the Homeland Security Committee on which I sit. Since the election, I had been fighting to make sure only legal votes are counted. And every allegation of substantial voter fraud or irregularity is investigated,” Green said in his letter.

“In the last two months I have repeatedly called on Attorney General Barr to use all resources at his disposal to investigate voter fraud and to make his findings public. I have joined with 100 plus members of Congress in filing a brief at the United States Supreme Court to urge them to hear that lawsuit from Texas. I have called for officials like the Georgia Secretary of State to appear before our committee in a briefing. Just recently, I filed a resolution in the U.S. House of Representatives with Congressman Ken Buck (R-CO-04) to support President Trump’s efforts to count every legal vote and to bring anyone committing voter fraud to justice. In this coming week, on January 6, I will stand with Congressman Mo Brooks (R-AL-05) and Sen. Josh Hawley (R-MO) in objecting to the electoral college certification progress in the U.S. Congress.”

Simons, according to her LinkedIn page, is Green’s grassroots director.

“You can sit down with them and have coffee with them. They want to hear what you have to say.”