Downtown Nashville now features a mural honoring the six police officers who evacuated residents ahead of the Christmas Day bombing. Sergeant Timothy Miller and officers Brenna Hosey, Amanda Topping, Tyler Luellen, Michael Sipos, James Wells are depicted on a rendition of the famed “I Believe in Nashville” mural series. Their version of the mural reads, “I Believe in Heroes.” 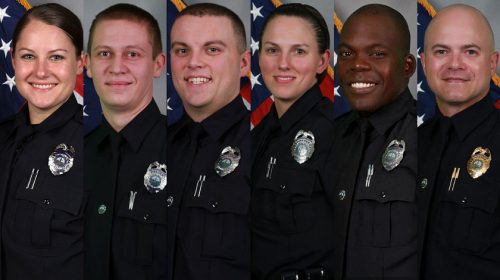 The mural is located at the corner of 2nd Avenue and Broadway, just ahead of the site of the bombing. The street is still blocked off due to the wreckage being cleared away. The groups behind the popular Instagram pages dedicated to the Nashville community and the “I Believe in Nashville” mural series painted the mural with the permission of the building owner, Hard Rock Cafe Nashville. The mural is expected to remain until the window underneath is replaced. After that, it will be framed and hung inside the building.

The Nashville community Instagram page added that all profits from their online store and two in-person stores – located in the Mall at Green Hills Mall and Opry Hills shopping center – will be donated to businesses and individuals impacted by the bombing.

The six officers initially responded to the reports of shots fired in downtown Nashville early Christmas morning. They began evacuating residents after they heard the bomb warning emitting from the RV’s speakers. The man held responsible for the bombing, Anthony Warner, was reported to police for purportedly building bombs in his RV by his ex-girlfriend last year. However, police stated that they never found any evidence to corroborate the report.

MNPD reported that they will continue to keep portions of the bombing area closed off to the public due to structural hazards. Officials shared that the area from 2nd Avenue North to Commerce and Church streets will be the last to reopen.

2 Thoughts to “‘I Believe in Heroes’: Downtown Features Mural Honoring Police Who Responded to Nashville Bombing”