“I want to talk about yesterday,” began Renacci.  “As someone who served in the House, and even though I wasn’t there yesterday, it is a moment I will never forget.”  The former congressman continued by saying people who broke the law weren’t Trump people, Biden supporters, Democrats or Republicans, they were “criminals who broke the law and should be prosecuted to the fullest extent.”

Renacci, a Republican, is Chairman of Ohio’s Future Foundation, a policy organization he began after the 2018 election.   Renacci began the 2018 election by competing for the Republican nomination for Governor but left that race to compete for one of Ohio’s seats in the U.S. Senate. Despite winning the GOP nomination, Renacci lost the general election to current U.S. Senator Sherrod Brown (D).

“Many are concerned about DC,” said Renacci, who spent eight years in the U.S. capital city but left because he realized “it was broken.”  The state gives the federal government excess power and the primary reason, according Renacci, is that Ohio borrows money from the feds.

The Ohio Checkbook, an online report of all local and state financial information, reports Ohio’s 2020 budget was $74.5 billion.  “Federal grants and stimulus payments were $29.1 billion last year – you can’t take back your government when you’re taking federal money. If you want to take your country back, the first place to start is your state.”

A study commissioned by Renacci and conducted by the University of Akron and Ball State University found that Ohio continues to lose ground economically – ranking “31st in population growth, 30th in wage growth, and 37th in job growth since 2015.”

“The state isn’t strong enough to handle future challenges. The state is failing for three reasons – we spend too much, tax too much and people are leaving,” Renacci said.

He gave context to Ohio’s spending habits – a nearly $75 billion with a population 11.7 million – by comparing it to other states with similar populations. Georgia has a population of 10.6 million, North Carolina 10.4 million, Michigan approximately 10 million and Florida has 21.4 million people.  Yet those states have the following budgets according to a chart displayed during the session:

Renacci said politicians don’t like to address reduced spending because it’s not the sexy approach but one Ohio must do if it is going to move forward to capitalize on the potential he sees.

“Medicaid is a good program, but we have to figure out why we are spending so much on it,” said Renacci who later noted that Medicaid spending as increased by 61% since 2012.

Other sources of overspending Renacci cited – JobsOhio (Ohio lost 6,200 jobs in 2019), Ohio’s pay to play culture (ways politicians reciprocate donations with projects and contracts), the state’s high ranking nationally for political corruption (in 2014 ranked one of the highest in nation – before the HB6 bribery cases and scandals in Cincinnati and Toledo).

Renacci said the Ohio Legislative Commission report warned state leaders October 2019 that warned “due to the low amount of reserves, a recession might result in depleting the Fund.” Now, Ohio is borrowing around seven million dollars a day to repay debt incurred to keep the insolvent unemployment program afloat, according to a Fox19 report Renacci discussed in a post-meeting phone interview with The Ohio Star. 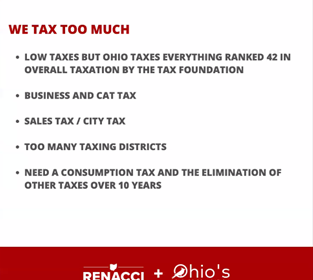 Renacci then talked about how over-taxing is shoving businesses out of the state – saying Ohio is ranked 42nd in overall taxation by The Tax Foundation.

The Akron/Ball State study also revealed that Ohio’s low national rank for industry diversity and low perceived quality of life are driving talent out of the state. However, Renacci noted that Ohioans are leaving for places like Indiana, Vermont and Washington State. “People aren’t leaving because of the weather, we’re just not doing a good job promoting” a lake to the north and river to the south, a state park in the middle of the state, amusement parks in the northern part of Ohio and hall of fame locations for rock and football.

Renacci said he has run over 60 businesses and had 3,000 employees, using that experience to praise private enterprise and its ability to meet the need to continuously do more with less.

He then praised former Governor George Voinovich who made it a priority to meet with department heads to request they find ways to reduce spending and signaled that the next governor ought to take the same approach.

When asked if he would run for Governor in 2020 Renacci said he would do whatever is required of him to move Ohio forward.