Here is a screenshot of the post, before it disappeared Sunday afternoon. 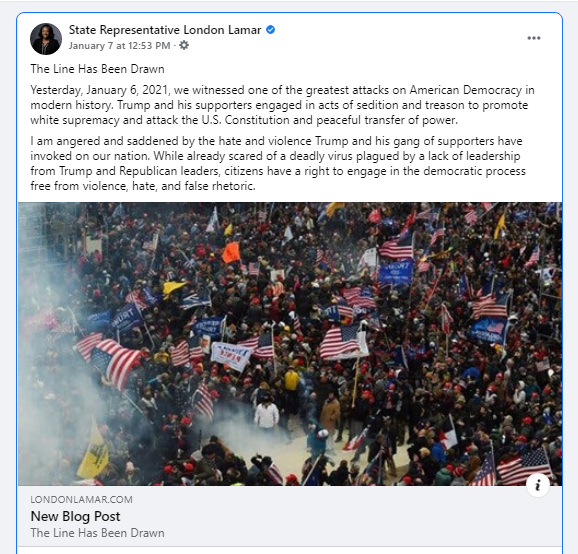 On her personal Facebook page, Lamar said Thursday that there was no equivalency between “the peaceful protests from this summer in support of racial justice” to the events on January 6, which she referred to as a “domestic terrorist attack against our US Capitol.”

Meanwhile, Tennesseans who travelled to Washington, D.C. have said that the vast majority of people who were there were peaceful.

Lamar’s legislation will add a new section to the Tennessee Code Annotated that addresses the prevention and detection of crime as it relates to the TBI.

Lamar’s HB0111 is very specific in who the law would apply to:

(a) The Tennessee bureau of investigation shall investigate each Tennessean suspected of participating in seditious or treasonous acts relating to the events that transpired at the federal Capitol Building in Washington, D.C., on January 6, 2021, and any related acts that may be carried out in, or planned for, the future that target the United States or this state.

(b) Seditious and treasonous acts relating to the events that transpired at the federal Capitol Building in Washington, D.C., on January 6, 2021, committed by an elected official of this state constitute grounds for the immediate removal, expulsion, or impeachment from office as provided under the Constitution of Tennessee or state law, as applicable.

Lamar calls for the act to go into effect as soon as it is signed into law by the governor, after passing both chambers of the Tennessee General Assembly.

Of note is that if Lamar’s proposal were to pass, it appears to be in direct violation of The Constitution of the State of Tennessee by retroactively changing the legal consequences of actions committed prior to the law’s enactment.

Section 11 of Tennessee’s Constitution Article I, Declaration of Rights, protects Tennesseans from such actions which come about because of the tendency for government leaders to abuse their power.

Section 11 states, “That laws made for the punishment of acts committed previous to the existence of such laws, and by them only declared criminal, are contrary to the principles of a free government; wherefore no ex post facto law shall be made.”

This provision of the Tennessee Constitution is consistent with the U.S. Constitution Article I, Section 9, which reads “No Bill of Attainder or ex post facto Law shall be passed,” as well as Section 10, which establishes the same rules for states.

Lamar is beginning her second two-year term as a State Representative for House District 91, after replacing Raumesh Akbari in 2018 who was elected Senator of District 29 the same year.

Following the night of her successful election in the 2018 mid-terms, Lamar took to Facebook Live with her analysis of the election results and accusing Tennessee of being racist, The Tennessee Star reported.

Over the course of the 14-minute video, Lamar said, “Tennessee is racist, period.  Period,” that “most of the Tennesseans who voted Republican are uneducated,” and inferred that those voters were the “real enemy here.”

While the video was almost immediately removed following the report, it was later retrieved by The Star.

Lamar later made a statement that in the video she was speaking on behalf of her constituents.