RICHMOND, Virginia – The Virginia General Assembly 2021 regular session began on Wednesday in Richmond with a relatively standard yet important first meeting of the Democratic-controlled state Senate.

Just as it was during last year’s special session, the Senate and its 39 members met in-person in a socially distanced space at the Science Museum of Virginia while the House of Delegates convened virtually. 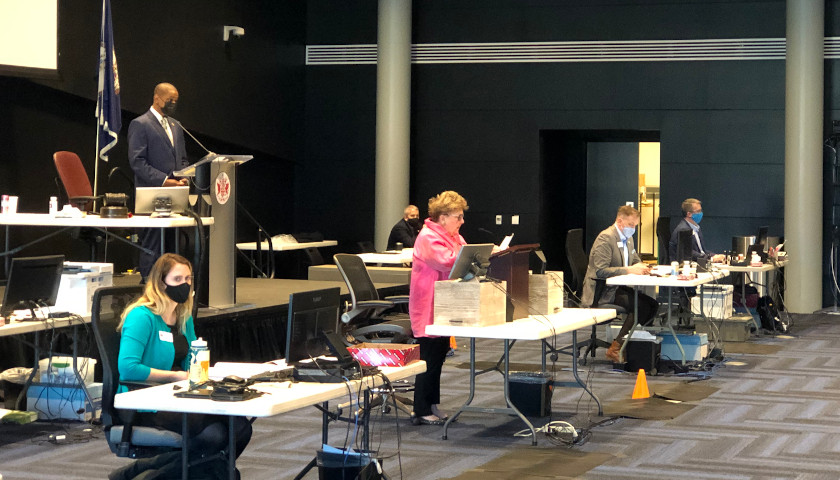 As is the norm for the opening day of a session, no specific bills were considered and no typical, lengthy debates occurred, but several items of significance were addressed by the legislative body.

The Senate started its session by unanimously passing a motion to adjust the normal procedures because of the coronavirus. Senate Minority Leader Thomas Norment (R-James City) put forth the motion allowing for Senators to participate in session virtually during the pandemic.

“In light of the pandemic situation and the vulnerability that some of our senators may have, it certainly seems appropriate to me that at least on a temporary interim basis that we make provisions for senators to participate remotely and electronically,” Norment said on the floor.

Specifically, only senators who have been previously agreed upon by the leadership of each caucus can meet electronically or in the case of a member testing positive. Also, there are multiple requirements that must be followed, such as a legislator who is participating remotely must personally cast their vote on video.

While discussing the motion with reporters, Senate Majority Leader Richard Saslaw (D-Fairfax) said Sen. Lynwood Lewis (D-Accomack) had contracted COVID, but apparently feels great and be back in session on Monday, and that Sen. Jill Vogel (R-Fauquier) was getting tested for the virus. Both Lewis and Vogel were not present on Wednesday.

The body then moved on to an extremely somber memorial resolution for the late Senator Ben Chafin, who died of COVID complications at the beginning of January.

Norment, Sen. Montgomery Mason (D-Williamsburg), Sen. John Cosgrove (R-Chesapeake) and Sen. Todd Pillion (R-Washington) all spoke about their former colleague during the resolution and the emotion for some was raw.

“It was difficult to find the words to adequately honor a man who always seemed to have the right words,” Pillion said as he choked up during his remarks. “Accompanied with an unforgettable smile and a twinkle in his eye that came from a kind and generous soul, his character was rooted in a genuine happiness rarely found these days.”

As a conclusion to the memorial, every senator as well as Lieutenant Governor Justin Fairfax placed a rose in glass vases on Chafin’s desk, which was covered in a black cloth.

The last item of the day was the procedural resolution for the 2021 session. The aspect of the resolution that garnered the most back and forth pertained to the session length, and whether it would last 30 days as Republican leaders want or 46 days, which was favored by Democrats.

After a short discussion, a substitute to the resolution that would have extended the session to 46 days was rejected (Y-22 N-17) because it required 26 affirmative votes or two-thirds of the members to pass.

With the session officially set at 30 days, it is almost a certainty that the governor will call a special session of the legislature to extend the length, which Northam recently said he planned to do.