Buses, a decommissioned ambulance, and lots of cars and trucks traveled through Richmond for hours on Monday afternoon as part of the Virginia Citizens Defense League’s (VCDL) Lobby Day 2021 demonstration. Most vehicles sported VCDL flags and decals; a few also waved Trump flags and other paraphernalia.

“When the first bus came, it just seemed like car after car after car, decked out, horns honking, people waving,” VCDL President Phil Van Cleave said. Car caravans came from all corners of the Commonwealth.

“We had people coming from other states that were a part of this as well,” Van Cleave said. “We had people from as far away as Wisconsin. A big truck driver had a big flatbed all decked out in flags, he came up from North Carolina.”

People from around the world came to Lobby Day according to Van Cleave, including teams of international reporters trying to understand modern American conservatism and pro-gun ideals after huge turnout at the 2020 Lobby Day.

“I talked to quite a few [international reporters] today. Everywhere from France to Germany, Sweden, it was just a lot interest around the world in little old Richmond,” he said.

“The right to own a firearm is a basic civil right. The right to defend your life, there’s nothing more important than that,” Van Cleave said. “What I would hope they would get from that is some of thee other countries should look at lightening up their laws to allow law-abiding peaceful citizens to be able to protect themselves.” 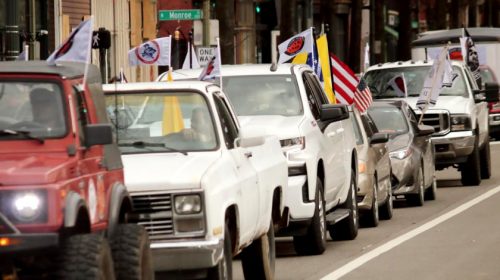 Van Cleave planned the caravan after the VCDL was unable to get permits to demonstrate at the Virginia Capitol bell tower. As a result, the VCDL was already prepared when authorities later decided to block all permits and fence off the capital grounds. Around 100 people openly carried firearms outside the fencing around the Capitol where they were surrounded by reporters and photographers asking for interviews.

Richmond police had posted signs banning firearms in keeping with a new ordinance banning firearms at events, but the signs were not enforced; the Richmond Police Department said on Twitter that firearms demonstrators were not violating the law. Richmond-based activist Mike Dickinson joined the demonstrators on foot in front of the capitol, using his bullhorn to criticize Governor Ralph Northam and criminal justice reforms.

“Lobby day today was much different then last year. Northam did all he could to sabotage it. Between the horrible blockades and boarding up of our great capitol — downtown looked like a third world country,” Dickinson told The Virginia Star. “It’s ironic that Northam today hid behind the police and guns when for nine months the Democrats have been at war with both.”

The VCDL had planned routes from multiple parts of Virginia converging on Broad Street in Richmond. The caravans were staggered, timed to arrive in the city throughout the afternoon. The caravans had checkpoints along the way across Virginia so that more participants could join, and Van Cleave warned drivers to obey all traffic laws. The Richmond police started redirecting traffic on Broad Street, making it difficult to assess how many cars there were in the caravans, but the streets around downtown Richmond were full of cars bearing VCDL paraphernalia and taking multiple laps throughout the city. Van Cleave thought it was likely that the traffic burden on the area was the primary reason for the blockades.

On Twitter, the Virginia Department of Transportation warned of traffic backups on I-95 south entering Richmond caused by the large volume of cars in the VCDL caravans.

Den Black drove from Hampton Roads as part of one caravan, which made multiple stops. At the beginning, the caravan had about 40 cars, but by the end of the route, over 100 cars were part of the caravan.

“It was quite something to see with the deplorables that were out this morning,” Black said. “Phil Van Cleave — what a marvelous job he’s done in putting this event together. Much, much harder I think than last year.”

Black said coordinating the routes as well as finding distributors to hand out the VCDL paraphernalia in advance of Lobby Day was likely a big investment of effort.

The biggest caravan never even drove past Van Cleave on Broad Street at Richmond’s Capitol hill.

“I heard, but I cannot confirm because I wasn’t there and I didn’t see any of it, that the caravan was almost ten miles long,” he said. The caravan did drive past the Science Museum of Virginia where the state Senate holds its meetings.

“It was the 18th consecutive year that the VCDL has had a Lobby Day to have their members come to the General Assembly on behalf of our Second Amendment rights,” he told The Virginia Star. “We wanted to make sure that people on the floor knew that once again, Virginians were coming from all over in support of their Second Amendment rights.”

Davis said, “I think it was positively received, and honestly after last year when over 50,000 Second Amendment supporters showed up on Lobby Day with no incidents and actually cleaned the streets to the point where they were cleaner when they left than when they showed up, I think they earned a lot of respect and support.”

Van Cleave said that the 2022 VCDL Lobby Day event would probably also be a car caravan, due to new regulations for event permits at the Capitol and the success of the 2021 Lobby Day. Although Van Cleave couldn’t assess how big the caravans were due to the blockades on Broad Street, he seemed pleased by event turnout.

“I figure if we had 2,000 vehicles, that would be good, and that’s very possible to get. Unfortunately, it’s really hard to tell,” Van Cleave said. “Look, anytime you have a rally like this — we’ve not heard of anybody being hurt, or anything of that nature. That’s a big success there. There was no damage, and we had a lot of cars going by where the legislators were, at least the ones in the Senate.”