A three-minute segment produced by Newsy’s Mark Greenblatt and Lauren Knapp called into question the locality of The Star News Network’s local news outlets, including The Minnesota Sun. In its reporting, Newsy failed to follow the basic ethical guidelines as described by its parent organization, Scripps.

In a bipartisan political system, we can be led to think there are “two sides to every story.” In fact, stories may have many sides that are potentially important and heighten the fairness of our reporting.

In their reporting, Greenblatt and Knapp failed to tell the “two sides” of this story, never mind the “many sides that are potentially important and heighten the fairness of our reporting,” that their parent company’s ethics guide requires.

The majority of the stories are national content (that appear on other Star News Digital Media sites as well). The last “local” story that appears on the Minnesota Sun under the “local” tab of its “news” page was written on October 25th by Corinne Murdock, who happens to have reported the three most recent stories featured under that “local” tab. Ms. Murdock lives in Tennessee, according to her online accounts. Why not assign Minnesota-related stories to staff reporters and editors in Minnesota?

The following is Leahy’s full response:

Your question, “Why not assign Minnesota-related stories to staff reporters and editors in Minnesota?” reflects a misunderstanding on your part regarding the ease of finding and hiring a quality journalist who can write from a conservative perspective in states beyond our base in Tennessee. We are always looking for journalistic talent, and continue to search for the right person who resides in Minnesota to handle duties there. Check with us next quarter.

Newsy asked Star News, why not assign Minnesota-related stories to staff reporters and editors in Minnesota?

CEO Michael Patrick Leahy said in an email, “Your question … reflects a misunderstanding on your part regarding the ease of finding and hiring a quality journalist who can write from a conservative perspective in states beyond our base in Tennessee.”

In other words, Newsy deliberately left out of its story the most important answer to the central question on which it was reporting, in an attempt to make The Star News network’s local publications seem less local.

This was not exactly a surprise to The Star News Network.

The biographies of both Greenblatt and Knapp suggest that they were both predestined for bias in their “reporting” on The Star News Network.

Greenblatt, according to his biography, “regularly combines the use of databases and sources to unpack systemic flaws and issues of injustice.” (emphasis added)

Meanwhile, Knapp has proudly appeared in several far-left news outlets, including The New York Times Op-Docs, The Atlantic, McClatchy Studios, PBS NewsHour and NPR. Her reporting focus, she says, is “stories that expose faults in our systems, told with complexity and nuance.” (emphasis added)

Both reporters appeared to approach their coverage of The Star News Network with the idea that the conservative news network has “flaws” and “faults.”

In another question emailed by Greenblatt to Leahy, Greenblatt challenged Star News’ decision to develop separate outlets in Tennessee versus Michigan. (Keep in mind, these questions were written before Newsy’s story was published):

Some university professors who study trends in media note the Star News Digital Media local sites (Ohio Star, Michigan Star, Virginia Star, Minnesota Sun, Georgia Star and Tennessee Star) look a lot like each other on any given day, with a majority of the very same stories making up the coverage that is packaged under different “local” banners. In this way, critics say, the local Star/Sun papers operate with a “veneer” of local operations – to gain the trust of people who think local news is more credible than national news sources. What is your response? Why create 6 local sites instead of one – if the majority of the articles are repeated?

Greenblatt’s ultimate conclusion – the falsehood that The Star News Network is not operating local news websites – was printed in his question.

However, perhaps more telling is the full answer by Leahy – which Greenblatt and Knapp chose not to include in the report – that addressed the deterioration of trust in national media that was at the core of Greenblatt’s question.

Our aggregate news selections are chosen with care and delivered to our readers in a convenient format. That readers do not trust national outlets is a failure on those outlets’ part, not ours. Maybe you and some professors and media critic friends should spend your energies to restore that trust and not worry so much about how we choose to do business. We created this business because it is what we want to do, and we don’t need [or] want a stamp of approval from you or left-wing university professors.

As for the “university professors who study trends in media,” who are also the “critics” mentioned in Greenblatt’s question above, both are transparently hyperpartisan leftists.

“These are basically national political publications that masquerade as a local news organization,” Melissa Zimdars, who teaches media literacy at Merrimack College said of the Star News Network in her interview with Newsy. “Really what they’re engaging in is, I would argue, propaganda.”

According to Newsy, their site offers concise, “unbiased video news and analysis covering the top stories from around the world.” (emphasis added)

“With persistent curiosity and no agenda, we strive to fuel meaningful conversations by highlighting multiple sides of every story,” the “About” section on its website claims. “Newsy delivers the news and perspective you need without the hype and bias common to many news sources.” (emphasis added)

But glancing into Zimdars’ digital footprint, she openly discusses her liberal bent, including her virulent dislike of former President Trump.

“My dad just told me he voted to re-elect Trump and I immediately started crying,” she said on Twitter in September. “It feels like this will forever alter our relationship. And I know this is an oversimplification of shifting politics in recent years but Facebook has been terrible for my dad.” 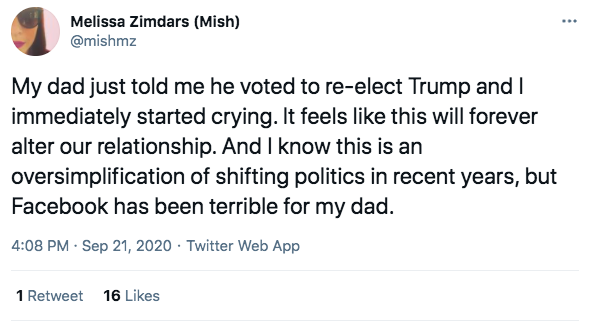 “He spends more and more time scrolling and coming across absolute bulls–t,” she said in another Tweet. “We used to politics/policies in the same reality, but we don’t anymore. And it’s f–king sad.” 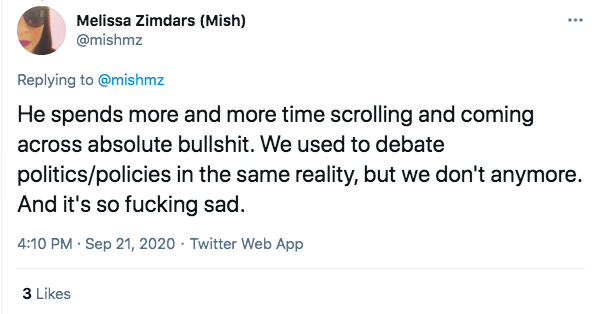 In recent years, many on the political left have cheered the removal of content on platforms like Facebook and Twitter under the banner of “misinformation.” The problem, however, is that the term “misinformation” is often applied through a partisan lens resulting in a censored news marketplace that is both intellectually dishonest and anti-competitive.

Still, Zimdars appears sympathetic to the pro-censorship cause.

In May of 2017, she shared a story from The Guardian lamenting that Facebook was not doing enough to stop the spread of “false information.”

Most of the recent censorship from Silicon Valley has stemmed from widespread claims that the 2020 election was rigged in favor of President Joe Biden. Facebook and Twitter both censored President Donald Trump after he made claims that voting machines could be inherently flawed. Twitter remove the sitting president outright days before the end of his term.

But the pro-censorship Zimdars once expressed her concerns on the very same issue.

“This is terrifying,” she said in a Tweet from Election Day in 2012, sharing a link to a Wonkette story about a voting machine refusing to accept a ballot completed for then-president Barack Obama.

“The point is, in some ways, to launder information through this sort of veneer of locality,” Zimdars said in her interview with Newsy. “So you see Minnesota Sun on Facebook as a source. You think, oh, this is a local Minnesota source.”

“Launder” is a formidable word with negative connotations, but Zimdars failed to explain how The Star News Network’s reporting of news from Minnesota qualifies as “laundering.”

Duke University professor Phil Napoli was the second media “expert” interviewed by Greenblatt and Knapp for Newsy’s story. He recently admitted that he is “helplessly glued to CNN.” 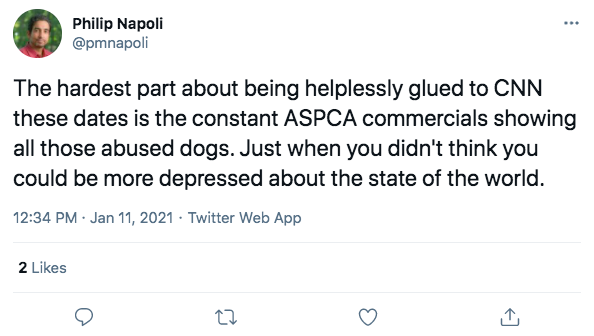 “Get ready for lots of suddenly hard-hitting coronavirus coverage on Fox News,” he said in a tweet on January 20, the day of Biden’s inauguration.

Most strikingly, though, Napoli coauthored an opinion column in The Hill, published on January 12, calling for the implementation of a government commission to tell the public what information is real, and what is fake.

“In his first week in office, President-elect Biden should announce a bipartisan commission to investigate the problem of misinformation and make recommendations about how to address it,” Napoli wrote. “The commission should take a broad approach and consider all possible solutions: incentives, voluntary industry reforms, education, regulations and new laws.”

He opined that lies were spread by “Republicans and their supporters using a web of partisan media outlets, social media and the dark corners of the internet,” and suggested that “fact-checkers and Washington journalists,” whom he apparently believes should be the guardians of truth, needed the government to supplant their alleged truth-telling.

Another question Greenblatt asked The Star News Network seemed to be designed to challenge the network’s journalistic bona fides.

“Please share a few specific links to stories that best display the type of journalism the Star News Digital Media sites are most proud of?” he said in his email to Leahy.

Pete D’Abrosca is a contributor at The Tennessee Star News and The Star News Network. Follow Pete on Twitter. Email tips to [email protected]

2 Thoughts to “News Wars: Scripps-Owned ‘Newsy’ Smears Star News Network as a Part of Its Coverage of ‘News Literacy Week’”