There is nothing in this YouGov poll that should shock a soul.

First broken by Brandon Jarvis over at Virginia Scope, the YouGov poll (attached to the UK Economist) puts former DNC chairman and former Governor Terry McAuliffe in a commanding 43% lead over the rest of the Democrat field.

Let’s start with the Dems.

Literally every other challenger is in the single digits and in the same pack. At this point, it’s like watching Secretariat capture the Triple Crown. Feel free to insert T-Mac + booze joke here.

Where it gets a bit more sobering is when you look at the vote totals for the Republican field as the Republican Party of Virginia (RPV) continues to tussle over its convention — unassembled or otherwise. 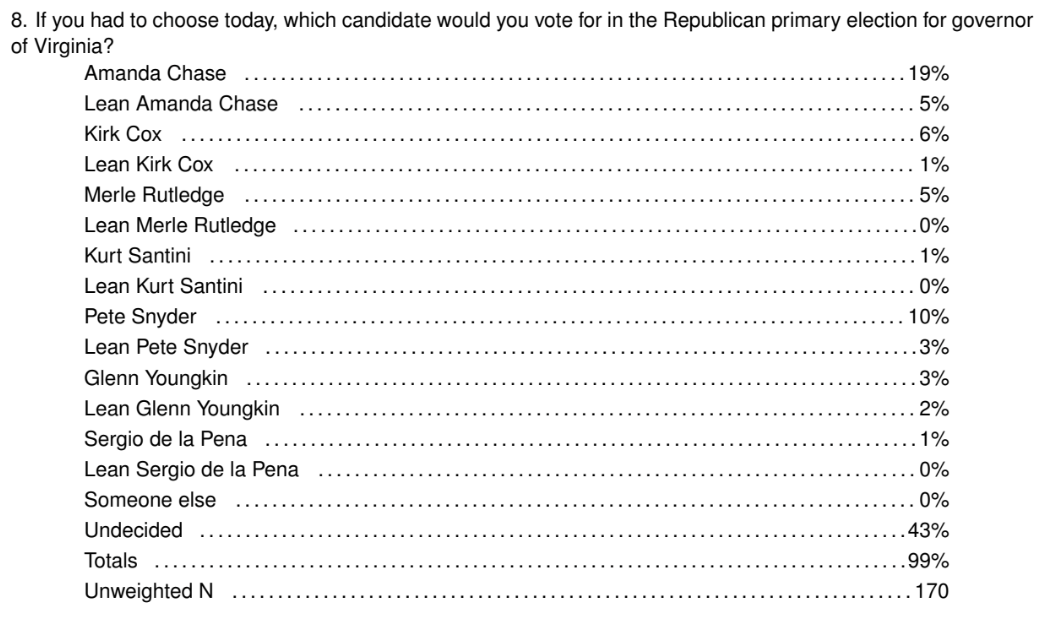 For those who are looking to add these up?

If all three Republican frontrunners — Snyder, Cox, and Youngkin — were to unite their base of support? They would all pull just about even with Chase at this point.

With these numbers, were the election to be held today? Chase would comfortably win any Republican primary nomination contest.

Before we go into the responses as to whether the candidates have actually started spending their money yet, let’s take a very quick trip into the time machine and review previous Virginia Republican nomination contests during the Trump era, where two roughly equal camps of the party squared off and went to war:

Hari-Kari vs. The “Not Crazy Party”

Former RNC chairman Ed Gillespie was expected to easily discard Prince William Chairman Corey Stewart’s campaign for the Republican nod for governor in a bid to run against Ralph Northam. Yet the race came down to a mere 5,000 votes as Gillespie barely edged Stewart 43-42 (with Frank Wagner garnering 14% of the vote).

The result wasn’t just shocking. It was a sign that Trump was indeed transforming the Republican Party.

In the following year, Stewart again announced his intention to run for US Senate against former VP nominee and incumbent US Senator Tim Kaine. Refusing to allow Stewart’s racially-tinged rhetoric to define the Republican Party unchallenged, Delegate Nick Freitas (R-Culpeper) — long a darling of the liberty movement — decided to take Stewart on with a shoestring budget.

The end result? Stewart barely edged out Freitas in a 45-43 contest that mimicked the results of the Gillespie-Stewart race by a handful of votes.

Stewart would go on to lose to Kaine in a 57-41 rout. Gillespie by contrast, after having nearly beaten Kaine in 2014, would discover that Trump’s ability to change election maps in states such as Ohio and Florida would also prove true in Virginia — losing to Northam 53-45.

Astute readers are picking up on two patterns here:

Very astute readers will pick up on a third pattern. While Virginia Republicans seem to be perfectly willing to openly commit hari-kari in the public square via Zoom meeting, Virginia Democrats are by and large united around McAuliffe and pushing their case to the general electorate as the “not-crazy-party”.

If there is a line that most people hear with regards to Chase’s campaign for governor, it is that single line — where most Republicans are perceived to not lift a finger other than to say “see I told you so” in contrast to Chase’s seeming ability to pick fights where none ought to be picked.

The fact that Chase isn’t even a Republican doesn’t seem to be phasing the populist wing of the GOP faithful even a little bit.

With candidates pledging to run as an outside candidate should Chase win the nomination, it should strike no one as odd that Chase has in turn pledged to run as an independent if she is not given the nomination method where she believes she can win hands down — a primary.

I don’t want to dive too deeply into the game of chicken that Virginia Republicans seem to be playing with one another at the moment. Many candidates believe they can win a primary contest against Chase, even with three well-funded candidates behind them.

Of course, at present the Republican nomination method is locked in with an unassembled convention, one that critics state has no mechanism within the RPV Party Plan.

Should Chase succeed in her lawsuit to move the nomination contest back to a primary, the advantages are entirely with Chase — and a handful of consultants who make money inspiring hopes and running candidates (of course).

There is one other option that is not openly discussed. Should the unassembled convention not move forward, RPV would have no choice but allow the State Central Committee to determine the nominee — a path that would please no one at all and would undoubtedly see Chase locked out of any path to victory.

Time isn’t on our side after all.

Yet the greater problem still remains. Two camps among Virginia Republicans are very evenly divided no matter how much money is spent on elections. No matter the nomination method. No matter the candidates.

If one camp splits itself four ways while the other camp has one champion? You don’t have to be Karl Rove to figure out the endgame.

The longer Republicans wait to figure it out, the longer it is going to be before we are able to make up that eight-point deficit — a problem that continues to bedevil Republicans statewide in a decade-long drought.

Shaun Kenney is the editor of The Republican Standard, former chairman of the Board of Supervisors for Fluvanna County, and a former executive director of the Republican Party of Virginia.
Photo “Kirk Cox” by Kirk Cox. Background Photo “Virginia Capitol” by Amadeust. CC BY-SA 3.0.