COLUMBUS, Ohio – Scammers took nearly all of the $330 million in reported improper payments the Ohio Department of Job and Family Services made with Pandemic Unemployment Assistance (PUA) funds, Director Kimberly Henderson (pictured above) said earlier this month.  That amount was funneled, in part, through 56,000 fake claims which were identified in December.  There were also overpayments on legitimate claims.

But there may be more fraud – much more – that is not yet reported.

Whether the $330 million is from misappropriation that happened mostly in December, or is largely a pile of results spanning several months, is unclear. Henderson said total losses will likely be pinpointed at the end of February.

“They should be able to pinpoint the amount weekly, or monthly,” said Ohio State Representative Derek Merrin (R-Monclova). He continued, “we need to get checks and balances in place to ensure money isn’t stolen in the first place.”

One Ohio State Senator told The Ohio Star the Director has signaled to him that the amount of money lost in ODJFS processing is likely in the ballpark of one billion dollars.

What that means for the State of Ohio and taxpayers is unclear. “The feds could write it off or it could come out of businesses – by hiking unemployment taxes if they seek to recover the losses. Whatever is done, it’s a big problem,” said the Senator.

But PUA was not the only target in Ohio. Conventional unemployment aid was bilked 2,200 times for $2.3 million in losses in October and November – the total is now believed to be $6.5 million.

An Ohio news outlet that obtained documents from the U.S. Department of Labor reported Ohio has already racked up over $833 million in improper Pandemic Unemployment Assistance (PUA) payments, but that’s not a number the ODJFS or state officials are readily discussing.

PUA is funneled through states to self-employed, part-time, gig and otherwise ineligible workers.  Until the December 27 law that extended PUA benefits and tightened qualification requirements, PUA was retroactive to the beginning of the program, contained relaxed income reporting requirements and allowed claimants to self-certify.

The law change may have forced bad actors to toggle their attention over to the conventional state benefit system – last week ODJFS reported a huge spike in traditional unemployment applications:

The Ohio Department of Job and Family Services (ODJFS) today announced that an increase in initial traditional unemployment claims for the week ending February 6, 2021 is suspected to be the result of fraudulent activity. The 140,444 new unemployment claims filed between January 31, 2021, through February 6, 2021, represents an increase of 194% from the prior week. To date, 44,000 claims have been flagged under suspicion of fraud and are under review. Even more of the 140,444 new claims are anticipated to be fraudulent. All of the claims will be reviewed, which will create delays in processing some legitimate claims.

In a July statement the state revealed “ODJFS placed temporary fraud alert holds on about 270,000 claims associated with specific banks and routing numbers after noticing patterns of suspicious behavior. More than 95% of the claims – representing an estimated $200 million each week – were flagged as having multiple fraud indicators, such as deceased individuals, fraudulent IP addresses and bank routing numbers, and invalid email addresses.”

Whether some of those claims were eventually paid and later determined to be fake is unknown. Henderson says 119,000 of those 270,000 summer claims have not been fully vetted.

The Star reached out to ODJFS seeking clarification on several matters.  The agency has not provided a response.

Ohio State Representative Shane Wilkin (R-Hillsboro) is Chairman of the Government Oversight Committee and he said he has heard the same rumor circulating Capitol Square – that the state may have lost upwards of $1billion.  However, he pointed out it’s just a rumor at this point. “I’m not saying it is or it isn’t but I do want to look into it.”

Wilkin said he has received several inquiries involving unemployment ranging from constituents who sat on hold for hours without getting any guidance about their legitimate claims to Ohioans who didn’t file for unemployment but received paperwork from ODJFS stating they did.

And he’s right. In the statement on initial jobless claims released after the week ending Feb 6, ODJFS revealed over the last 47 weeks 2,416,342 initial unemployment claims were filed – more than the combined total of initial claims filed over the previous five years.

The agency has distributed $8.3 billion in unemployment compensation payments to 925,000 Ohioans.  An additional $8.5 billion in PUA dollars were given to more than 837,000 Ohioans. 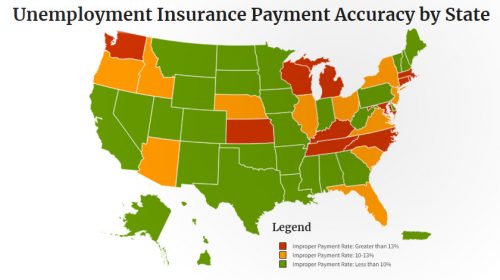 Merrin is a member of the Unemployment Compensation Modernization and Improvement Council – a group he says was created when the legislature took an extraordinary step in House Bill 614 to oversee and implement improvements in the unemployment system.  Director Henderson appeared before the council last week for a couple of hours providing insight and answering questions.

Rep. Merrin’s recollection is that $330 million in PUA payments and $6.5 million in traditional state unemployment payments are gone. But he pointed out, that’s just the amount that “has been caught, it could be higher than that.”

He said “look at the amount sent in PUA, if 10% is fraudulent, that gets you to over $800 million right there.”

Although total losses are not settled, and Henderson is unclear how information was stolen from Ohioans to facilitate the surge in false filings with ODJFS, the Director is confident identity theft didn’t happen via hack or leak from a state computer system, she told a Columbus news station last month.

One Ohio educator is not so confident.

Angela Gehr, a special education coordinator, received notice that a file had been claimed for unemployment in her name.  However, she hadn’t applied for benefits.

About a week earlier Gehr renewed her teaching license with the Ohio Department of Education and wondered if information during that process was either intercepted or triggered a leak.

As it turns out, two district employees (that she knows of) had both received unemployment alerts, one right after putting a license renewal into the Ohio Department of Education system.

On top of not knowing whether her fraud case is associated with her license renewal, Gehr has no idea where she stands in the overall matter.

Law enforcement was contacted, but Gehr said “the police told us they could not investigate. Instead, we had to go through Job and Family Services – they are doing internal investigations themselves and do not want outside parties to investigate.”

Gehr said she did eventually receive a piece of mail from ODJFS with a pin number and notice that a username would be sent separately, but the second letter never arrived.

“I don’t have the username, just the pin. So I can’t see the claim. I don’t think it was paid because we didn’t receive a tax form – I think we would have.”

She did attempt to file a fraud report with ODJFS but at the time there was no way to accurately report her situation – there was an option to report someone you know is performing fraud or to file your own claim, according to Gehr. Neither option applied because she didn’t know the perpetrator.

“I feel like I was violated. I feel like somebody has critical information. I don’t feel like there is any conclusion, solution anything…I feel helpless,” said Gehr.

She also mentioned many years ago a hospital system was hacked and her daughter’s patient information was compromised. Consequently, the health system offered the family identity protection and fraud alerts – a move Gehr thinks, at a minimum, Ohio should be offering people whose details are in the hands of nefarious actors.

The U.S. Department of Labor provided funds to states at the end of September which were to be used to pay staff and contract services to investigate and detect fraud and apply tools to increase the stoppage, detection and recovery of improper federal payments.

“The Department of Labor has made preventing fraud and abuse of the unemployment insurance system a top priority,” said Secretary of Labor Eugene Scalia, in a statement accompanying the rollout. “State workforce agencies are on the front lines in the fight against fraud and abuse, and the funding and resources provided by the Department today will help States protect the integrity of their unemployment insurance programs.”

Ohio Governor Mike DeWine (R) announced earlier this month a private-public partnership formed inside the ODJFS that will include workers from big Ohio companies Fifth Third Bank, Nationwide, Western & Southern, Encova Insurance and Key Bank who will assist with plugging holes in the unemployment system.

Heavily involved in the deal is lobbyist Pat Tiberi, President  and CEO of the Ohio Business Roundtable – the group that lobbied last year to keep Senate Bill 311 from passing.  The law would have empowered the state legislature to lift regulations that are strangling Ohio’s smaller businesses.

In January, Ohio Attorney General Dave Yost asked Congress to safeguard hundreds of thousands of Ohioans from taxes and penalties on unemployment benefits they never received.

Last week, U.S. Congressman Brad Wenstrup (R-OH-02) joined a group of 38 who are asking that tax filers who may be victims of unemployment fraud be allowed to file their taxes while their issues are still being investigated.

Merrin said during the legislative council meeting last week he requested lists of banks receiving payments.  Non-chartered banks, banks overseas – “I want to see a list of those because my gut tells me once a payment is approved it’s going to whatever bank the person filing wants.”