A Tennessee Valley Authority (TVA) proposed transmission line that will service the new Facebook data center and support future economic development in Gallatin will impact as many as 165 property owners representing about 225 parcels, lowering their property values and raising their concerns for safety.

TVA notified property owners affected by the proposed transmission via letters dated in mid-January, which invited them to access a virtual open house between January 21 and February 22 for further information and the opportunity comment on the project. 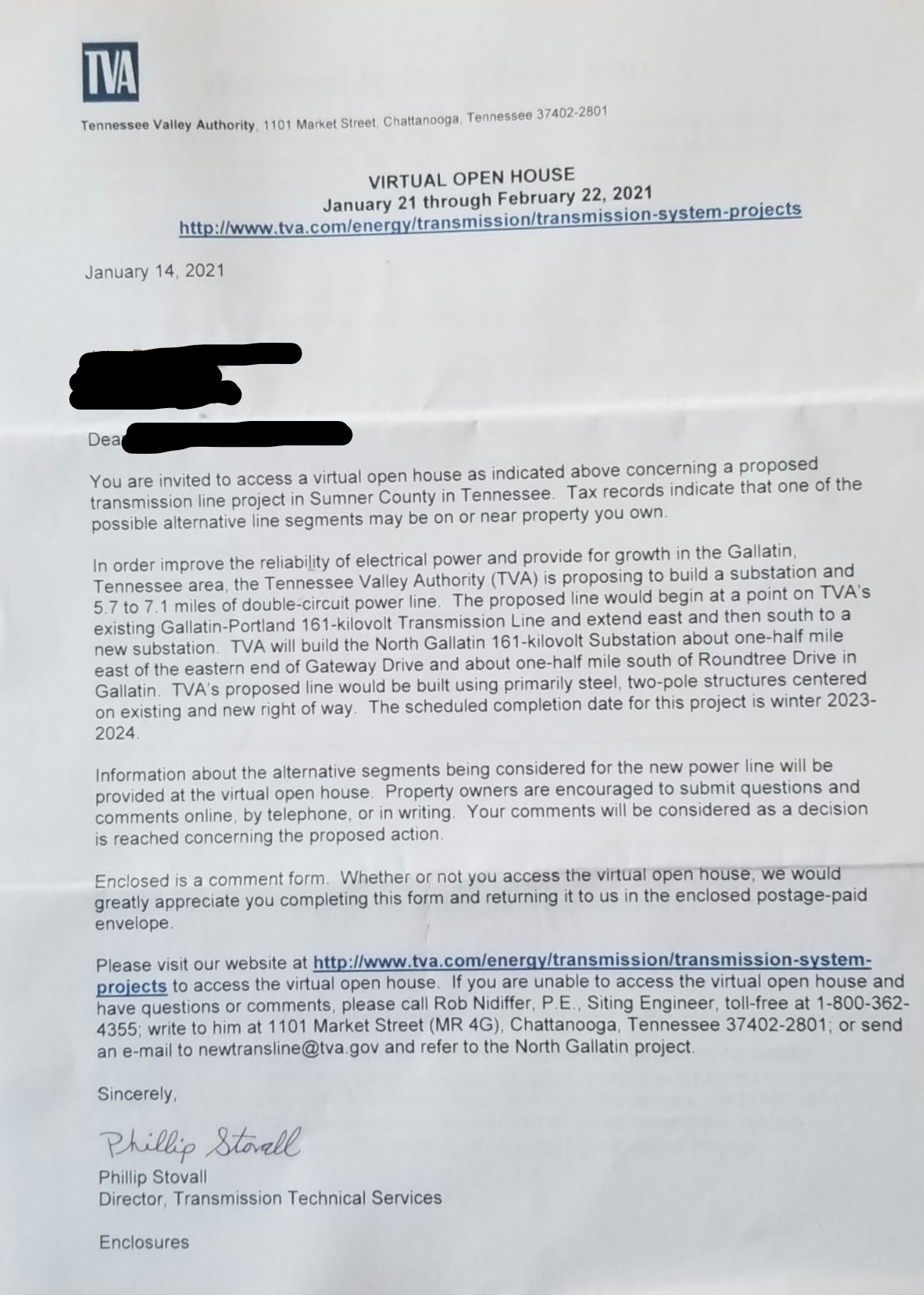 Following initial survey work and easement purchases in 2021 and 2022, construction on the transmission line project is slated to begin in the Spring of 2023.

A transmission line differs significantly from a distribution line. TVA’s transmission lines are high voltage that move power from the generating plants to local power companies. Local power companies then use a system of lower voltage distribution lines to move power from substations to individual homes, businesses and industries.

TVA told The Tennessee Star that for the proposed transmission line project in Gallatin that a reasonable range in height for the two-pole structures that will be used is between 95 and 140 feet.

TVA’s proposal includes a known starting point of a connection to an existing Gallatin-Portland 161-kilovolt transmission line between Highways 174 and 109 north of Gallatin. It will end at a new TVA substation at the eastern end of Gateway Drive within Gallatin’s Industrial Park that currently includes gun manufacturer Berretta.

In between, TVA has a 4.8 mile, 300-foot right of way (ROW) which it acquired in the late 1970s for the purpose of routing transmission lines to the Hartsville Nuclear Plant, which never came to fruition, TVA told The Star.

According to TVA, the individuals who owned the underlying property affected by the right of way were compensated at that time by TVA.

That easement was obtained by TVA for $81,750 more than four decades ago, one of the current property owners who will be impacted by the proposed transmission line John Miller, told The Star.

About 12 years later and after the nuclear power plant had been abandoned, Miller said the land was subdivided for housing.

TVA told The Star that their existing easement rights do not require that TVA compensate the current property owners for utilizing the easement that had already been purchased.

Segment 4, the shortest segment, runs north to south and will connect to TVA’s future substation.

In between, TVA is in the process of determining whether to proceed with Route 1 or Route 2 to connect Segments 1 and 4.

The more easterly Route 1 – which includes 4.8 miles of the current ROW of Segment 1 plus the new Segment 4 – would require another 2.3 miles of new 100-foot ROW to make up Segment 2 for a total route length of about 7.1 miles.

The more westerly Route 2 – which would include utilization of about 2 miles of the existing Segment 1 ROW plus the new Segment 4 – would require about 3.7 miles of new ROW for Segment 3 for an overall route length of 5.7 miles.

The concerns of homeowners like Miller and others he has spoken with are related to the lowering of their property values as well as health-related issues.

Studies on both topics vary widely in their conclusions.

Realtor Magazine reported in 2018 that a study in the Journal of Release Estate Research concluded that vacant lots – which eliminates other factors that could influence price, like home style and square footage – when located next to power lines sell for a “whopping” 45 percent less than similar lots further away from high-voltage transmission lines.

With land typically representing 20 percent of a home’s overall value, the report said, a 45 percent decrease in land value translates to a total property value drop of about 9 percent.

Within the January 2021 article, “How Much Do Power Lines Lower Real Estate Value?” SFGate offered a tip:  “Power lines located next to or near a property may decrease the real estate value from 10 to 40 percent.”

Much of the loss in property value is due not only to aesthetics but to the concern about the health effects of electromagnetic fields (EMFs) generated by high-voltage transmission lines.

Most real estate sources and TVA point to the numerous studies that have been conducted over many decades, which have been inconclusive in terms of reporting adverse health effects such as cancer, birth defects or miscarriages.

TVA says that electric fields and magnetic fields are independent of each other, resulting from the energization of the wire and the flow of power, respectively.

Both electric and magnetic fields, however, are reduced by distance, mutual cancellation or shielding, according to TVA.

None of the summary information TVA offers addresses whether mutual cancellation or shielding is employed or what specific distances need to be maintained to ensure safety.

The centerline placement of the two-pole transmission line, TVA told The Star, will be just 50 feet north of the southern edge of the existing 300-foot ROW.  That puts the high-voltage transmission line within close proximity to numerous residences in the area.

When Facebook announced in August 2020 the new data center in Gallatin, COO Sheryl Sandberg touted in the Tennessean that the facility “will be the most advanced yet – powered by renewable energy.”

Concurrently, TVA and Jackson Energy Authority announced their partnership with solar power company Silicon Ranch to build a new 700-megawatt solar farm on about 900 acres in Madison County to supply power to the new Facebook data center in Gallatin, the Jackson Sun reported.

The solar farm, which will reportedly provide the immense amount of electricity the data center will use, is part of a Facebook initiative to use renewable energy for all of its operations from the end of 2020 forward, according to the report.

What the report did not detail is what it takes and the impact of getting that solar power from Madison County to Gallatin in order to serve the energy-intense Facebook data center.

Facebook, which enjoys special protections under Section 230 of the Communications Decency Act, has come under growing criticism for a wide range of increased censorship activities.

TVA advised The Star Thursday that so far approximately 150 people had participated in the virtual open house, which remains open to anyone wishing to comment until the end of business on February 22 and can be found here.

Laura Baigert is a senior reporter at The Tennessee Star.
Photo “Clonee Data Center” by Facebook.