Light rail ridership in the Twin Cities metro area was down an average of 59% in 2020 when compared to 2019 numbers.

The light rail’s ridership suffered a steep decline from January of 2020 through June, at which point ridership began to creep back up. May and June proved to have the lowest numbers, with an 80% decrease from the same months of the previous year.

The Northstar Line, the commuter train that runs from Big Lake to downtown Minneapolis, saw an even higher decrease of 80% in its 2020 ridership numbers.

Combining the light rail, the Northstar Line, buses, and other rideshare options, ridership decreased overall by 53% for the metro area.

While the beginning of 2020 began with slightly higher ridership overall than the beginning of the previous year, the numbers quickly dropped as the months continued, compared to the steadily rising numbers of 2019. 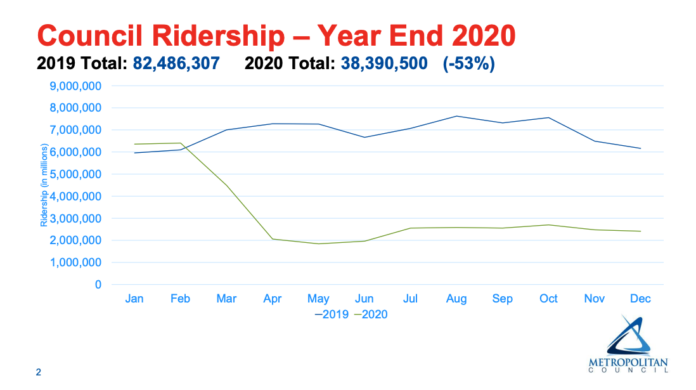 The Met Council’s presentation on these numbers cites COVID-19 as the biggest contributor to the significant decline. Commuters to downtown now regularly telecommute from home since the onset of COVID, no longer traveling at all for work.

The council also listed the “pace of vaccinations” as a determining factor of ridership throughout the rest of 2021.