“It is clear Congressman Gonzalez’s wrongful decision to vote with Nancy Pelosi and Chuck Schumer to impeach President Trump has undermined his ability to effectively represent the people of the 16th District,” Timken wrote in her statement.

It is clear Congressman Gonzalez’s wrongful decision to vote with Nancy Pelosi and Chuck Schumer to impeach President Trump has undermined his ability to effectively represent the people of the 16th district.

The demand for Gonzalez to resign came 48 days after the fact and is Timken’s third iterative critique of the Ohio Congressman’s vote to impeach President Trump.

The delay and change prompted one former Ohio lawmaker to decree in a text – “she’s Kelly Loeffler 2.0,” referring to the former U.S. Senator from Georgia with deep pockets and connections who waffled on her commitment to contend the Electoral College certification of the 2020 Presidential Election.

Timken’s first statement was that Gonzalez was an “effective legislator” and a “very good person” who had “a rational reason why he voted that way.”

Her second statement: “Anthony Gonzalez made the wrong decision on impeachment and I disagree with his vote. This sham impeachment is illegal and unconstitutional.”

Anthony Gonzalez made the wrong decision on impeachment and I disagree with his vote.

This sham impeachment is illegal and unconstitutional. https://t.co/yTIFXAmrD3

And in her latest statement on the U.S. Rep, she said, “Gonzalez should put his constituents and the Republican Party first by resigning from Congress.”

Josh Mandel, former two-term Treasurer of The State of Ohio and one of Timken’s opponents for the U.S. Senate seat from which Rob Portman will retire said, “[L]ast night [referencing a Sunday night talk Trump gave at a conservative conference], President Trump declared that there is no room in the party for “spineless establishment Republicans” and with this latest flip-flop, Jane Timken has proven herself just that – a spineless establishment flip-flopper.”

Jim Renacci, former U.S. Rep who preceded Gonzalez in Ohio District 16, told The Ohio Star in an interview that Ohioans are looking for policies, not political punches.

Just like Republicans in the 16th District, Republicans across Ohio are looking for Senate candidates who stand on principles and beliefs, not talking points.

I, like many others, hope to see all the candidates for the Ohio seat in the U.S. Senate start talking about the policies and positions they support and how they personally plan on changing the direction of Washington, D.C. for future generations.

Dublin, Ohio businessman and 2022 candidate for U.S. Senate Mark Pukita pointed The Star to his Facebook post on the matter in which he said, “Does Ohio really need another knee-jerking, flip-flopping, Harvard-indoctrinated, ‘say anything to get elected’, #OldGOP operative, lawyer as a Senator?”

When Timken announced her bid for the 2022 senate race she referred to herself (as she did in her 2017 bid for the ORP Chair) as a unifier but has also given herself the moniker “conservative disruptor.”

In her bid to become the Ohio GOP boss in ’17 Timken pledged to cease ORP endorsements of candidates during primary races but in 2018 her husband Tim Timken (founder of lobbying firm McKinley Strategies), held a fundraising event for then-U.S. Congress candidate Gonzalez prior to the primary.

The Timken Company is the top contributor to Gonzalez in his political career ($55,950), according records from the Center for Responsive Politics.  The U.S. Federal Election Commission shows that Jane Timken gave Gonzalez $2,700 in 2018.

A screencap of the tweet is below but it has since been deleted. 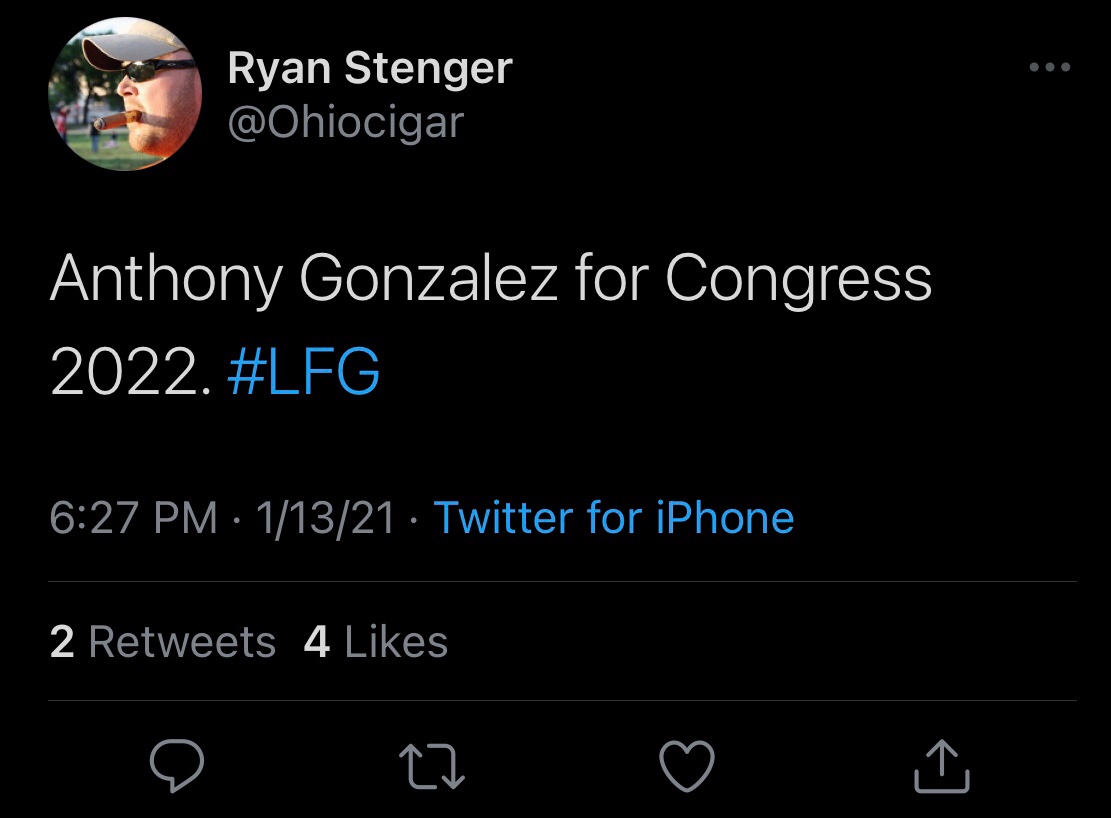 Last month Timken received supportive comments from Trump administration member Peter Navarro – “Jane definitely helped us turn Ohio red. She was instrumental for us on the Trump team, ” he said.  Sentiment that Steve Bannon may have grabbed hold of to call Timken “pure MAGA.”

Some Ohioans mistook the Navarro praise and Bannon podcast commentary as a Trump endorsement.  But Navarro is not Trump.

Monday night, Axios scooped the inside story detailing how Trump’s team is pumping the brakes on a Timken endorsement.

In a reaction seemingly related to the news Trump hadn’t endorsed her, Timken released a statement on Tuesday morning listing the names of 19 Ohio State Representatives who have endorsed her.

I am honored to have the support of so many strong conservative leaders in our State House. Together, we will advance conservative solutions and values to secure a more prosperous future for every Ohioan. pic.twitter.com/r7nf8tbmwT

The Star reached out to Tim Lolli of the Gonzalez team and newly elected Chair of the ORP Bob Paduchik for comments,  but neither responded.