As crime skyrocketed and police response times increased in the Twin Cities, a record number of Minnesotans took protection into their own hands.

2020 clocked in a 53% year-on-year increase in the number of permits to carry issued in Minnesota, according to newly released data from the Department of Public Safety (DPS). Almost 100,000 new permits were authorized. 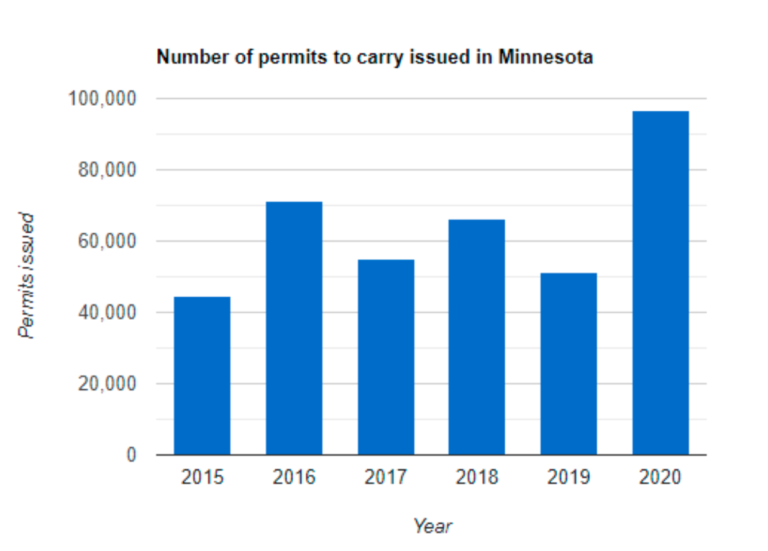 The lion’s share of new permit holders live in Hennepin County, which contains Minneapolis. The next four counties that issued the most permits are Dakota, Anoka, Ramsey and Washington — all of which are directly proximal to the Twin Cities. These five counties account for about 40% of the total permits issued last year.

According to DPS, Minnesota sheriffs “issued more firearms permits in 2020 than in any other year” since the Personal Protection Act was signed into law in 2003. 358,897 Minnesotans presently hold a permit to carry. That’s roughly 6% of the state’s population.

Virtually none of these permit holders have used their guns for malevolent purposes. While the DPS does report that 3,110 permit holders committed crimes last year, less than 2% of these misdeeds actively involved a firearm. The overwhelming majority of the infractions involved violations of city ordinances, fishing laws or traffic offenses, according to the department.

One such measure, HR 127, aims to establish a publicly available registry of all gun owners, a sweeping ban of standard capacity magazines and modern firearms, mandated annual taxes on owned guns and more.

Other measures, like a bill recently introduced by California Rep. Mike Thompson, seek restrictions such as so-called “universal background checks.”

If enacted, laws like these will make it significantly more difficult or impossible for normal citizens to carry guns for self protection. This is concerning for Minneapolis residents who were recently left without police protection during the George Floyd riots when cops simply stopped responding to many calls.

Even in 2021, when help does arrive, it’s often too little and too late as response times remain elevated since last summer’s unrest, per Fox News.

This is unacceptable for residents of the city who daily must reconcile with a 105% increase in shootings, 70% increase in homicides, massive increase in carjackings and 22% uptick in rape.

Kyle Hooten is a former member of the Trump Presidential Administration where he served in the Department of Commerce as a speechwriter for the Secretary.