In a blistering statement Friday, former President Donald Trump blasted Joe Biden for the “spiraling tsunami” at the border, placing the blame for the dramatic surge in illegal immigration squarely on Biden’s “disastrous leadership.”

“Our border is now totally out of control thanks to the disastrous leadership of Joe Biden,” Trump said in his statement. “Our great Border Patrol and ICE agents have been disrespected, demeaned, and mocked by the Biden Administration. A mass incursion into the country by people who should not be here is happening on an hourly basis, getting worse by the minute.”

The former president warned that the new administration’s lax policies at the border—allowing criminals and Covid-positive migrants into the country— will have dangerous consequences for the nation.

“Many have criminal records, and many others have and are spreading covid,” he noted. “Interior enforcement has been shut down—criminals that were once promptly removed by our Administration are now being released back onto the street to commit heinous and violent crimes. ICE officers are desperate to remove these convicted criminals, but Biden won’t let them.”

Trump added that the crisis at the border is “overwhelming local communities, depleting budgets, crowding hospitals, and taking jobs from legal American workers.”

The Biden administration has ordered Border Patrol agents to restart “catch-and-release” policies to deal with the massive spike in migrant families and unaccompanied children on the Texas border. As American Greatness reported on Wednesday, even migrants who test positive for Covid-19 are being turned loose into the U.S.

“When I left office, we had achieved the most secure border in our country’s history. Under Biden, it will soon be worse, more dangerous, and more out of control than ever before,” Trump lamented. “He has violated his oath of office to uphold our Constitution and enforce our laws.”

There has never been a time on our southern border like what is happening now but more importantly, what is about to happen. Now that Biden has implemented nationwide Catch-and-Release, illegal immigrants from every corner of the Earth will descend upon our border and never be returned. You can never have a secure border unless people who cross illegally are promptly removed.

I had a great relationship with Mexico, and its wonderful president, but all of that has been dissipated by the gross incompetence and radicalism of the people currently in charge. The Remain in Mexico Policy was incredible, but immediately abandoned by Biden, probably because it worked so well. Likewise, our Safe Third Agreements in Central America were extraordinarily successful, so Biden foolishly ditched them too. We stopped payment of the hundreds of millions of dollars paid to them and then developed an excellent relationship that made our country and their countries more secure. We put in place powerful rules and procedures to stop the smuggling and trafficking, but the Biden Administration has abandoned these proven strategies and instead given the smugglers and traffickers effective control of our border.

Despite being delayed by years of litigation and politics by the democrats, the wall is almost finished and can be quickly completed. Doing so will save thousands of lives.

The Biden Administration must act immediately to end the border nightmare that they have unleashed onto our Nation. Keep illegal immigration, crime, and the China Virus out of our country!” 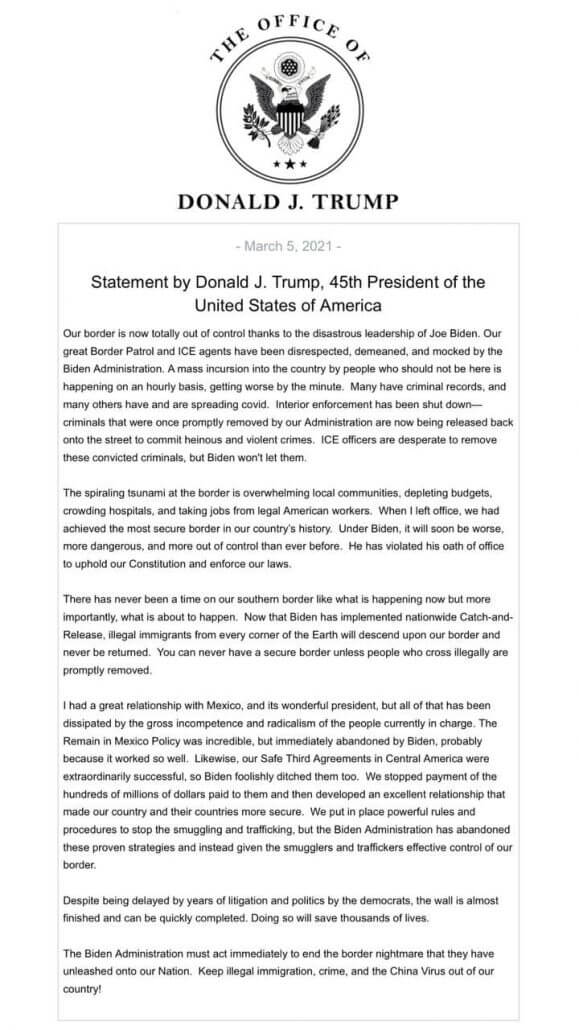 “We don’t take our advice or counsel from former President Trump on immigration policy, which was not only inhumane but ineffective over the last four years,” she sniffed. “We’re going to tread our own path forward and that includes treating children with humanity and respect and ensuring they’re safe when they cross our borders.”

The Biden administration has scuttled a number of successful Trump-era policies that helped secure the southern border, Fox News pointed out.

He has stopped construction of the border wall, ended the Migrant Protection Protocols (MPP) — and scrapped orders ending “catch-and-release.” Separately, he and congressional Democrats have pushed for pathways to citizenship for illegal immigrants in the country already.

The Migrant Protection Protocols, known as the “Remain in Mexico” policy and hashed out with Mexico as part of an agreement not to impose tariffs on the southern neighbor, were one of a number of agreements ended by Biden. He has also ended the asylum cooperative agreements (ACAs) with Northern Triangle countries that made migrants claim asylum in those countries. Those agreements were part of a series of policies the Trump administration took to end the 2019 migrant crisis.

The Biden administration has said it is ending the “cruelty’ from the Trump administration and replace it with “an orderly humane and safe immigration process.”

“We are not saying don’t come. We are saying don’t come now, because we will be able to deliver a safe and orderly process for them as quickly as possible,” Homeland Security Secretary Alejandro Mayorkas said.

Mayorkas last month introduced a plan to “reorganize”  ICE’s Enforcement and Removal Operations to the point where it will no longer be about enforcing the nation’s immigration laws, American Greatness reported.

The Cuba-born Mayorkas reportedly floated a plan to essentially “abolish ICE”  during a telephone conference call with agency personnel in Texas. The new Homeland Security chief proposed “taking members of the country’s 4,000-strong deportation force off the streets and convert them into criminal investigators.”