COLUMBUS, Ohio – Last week, Federal Bureau of Investigation (FBI) agents made an unannounced visit to the home of a Marysville woman who was in Washington, D.C. on January 6 – the day a crowd entered the U.S. Capitol and the incident turned violent, resulting in an officer fatally shooting a woman and four others dying from medical emergencies.

Melissa Ackison, former Republican candidate for the Ohio Senate, reached out to The Ohio Star about the incident. According to Ackison, FBI agents told her they were visiting her to follow up on “multiple Internet tips targeting [her] as an insurrectionist.”

Ackison welcomed the agents inside because she said she grew up in an environment of respect for law enforcement. “I knew in my mind I had done nothing wrong, so I had no issue with answering their questions. But I was literally questioned in my living room by federal agents, while recovering from two separate surgeries within a week of each other.”

“I have friends who are U.S. Marshals, members of elite SWAT groups in Ohio. I’ve conducted ride-along programs.  My friends say, ‘don’t ever talk to the police when they come to your house,’” said Ackison; adding, “So you’re in a very conflicting situation of trying to know there are good guys out there but in your gut you recognize that political motivations are very real, depending on varying factors and overall political climate.”

The former senate candidate said she believes the visit was instigated by agitators who use anonymous internet accounts to defame and bully those with whom they disagree politically or ideologically.

When asked if she saw anything suspicious at the rally, she said she told agents “it was all grandma-type Trump supporters,” from her angle.

“I didn’t stay for the entire Trump speech. I was frustrated that he wasn’t talking about definitive information related to a stolen election so…I actually left and went back to the Virginia area to Joe Thiesmann’s restaurant,” she said.

She continued, “my phone was blowing up while I was trying to eat…from media sources in Ohio.” Ackison said she decided to go to a quiet spot (a bathroom) to record a video that published to Facebook. The video can be viewed below.

FBI agents allegedly told Ackison they had pictures of her in a bathroom – she thinks the photos are still shots from the video she shot at dinner.

“It’s just frightening that people can tag you to something you didn’t do and it results in federal agents showing up.”

But Ackison isn’t a lone target for information and investigation, according to Ohio attorney Maurice Thompson. “They’ve done that to maybe 300 Ohioans – those who were present on January 6. I’ve heard from many. Always unannounced,” Thompson said.

He continued, “I’m advising those visited to only ask questions, never answer any questions, and get any request for information in writing. They are typically seeking access to photos. But these are voluntary encounters, and everyone is free to decline.”

Rocky Ratliff, Ackison’s attorney, talked with The Star. “When the FBI comes people get nervous. But the fact is, local law enforcement has more of a right to be at your front door than the FBI. You have Constitutional guarantees, make sure you’re exercising those rights accordingly,” said Ratliff.

He continued, “The FBI is extremely professional so they will understand when someone says, ‘I understand you have a job to do, I don’t want to be disrespectful but I do want to have my attorney present before talking.’”

As events in Washington unfolded on the day Congress was certifying state results from the 2020 Presidential Election, the FBI took an assertive approach – posting to social platforms promising prosecution, while requesting assistance from users to supply tips and information to bring criminal offenses to justice.

Former U.S. Attorney David DeVillers, who stepped into the spotlight last July when an FBI criminal complaint was announced involving the alleged House Bill 6 bribery and racketeering scheme, took to Twitter on Jan. 6 to declare prosecution of anyone within his jurisdiction who committed crimes.

One day later he invited the public to share tips. 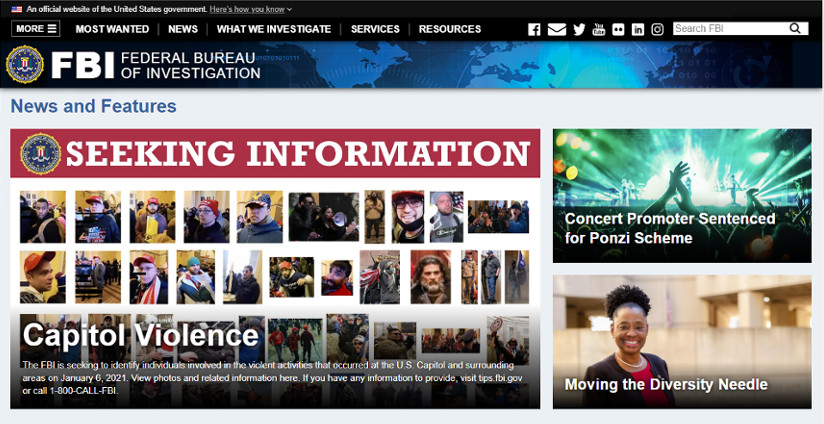 The main FBI webpage, as well as those of field offices, posted photo collages of people suspected of committing, or having information about, federal crimes.

Consequently, the bureau had a big task: sifting through legitimate and illegitimate tips pouring in from solid sources to internet trolls.

The Star reached out to the two agents who visited Ackison to get insight into how the agency handled the voluminous task and to discover guidelines for separating real claims from bogus.

One agent was reached and declined comment, redirecting the inquiry to the Cincinnati field office. A call was made to the field office but the media liaison had not responded by the time this report published.

Ackison said she hopes the silver lining in this dark cloud – in addition to bringing those who committed crimes to justice – would be attention paid to internet harassment, bullying, defamation and libel.

Earlier this week The Hill reported on a Georgia woman who filed a lawsuit against one of her community members who, she claims, tried to tie her to the criminal activities at the U.S. Capitol.

In that case, the other party didn’t hide behind an anonymous internet account.

However, Ackison pointed out that the FBI is well equipped to investigate cyber activity and unearth cybercrime. “I can assure you through digital footprint technology, even deleted accounts of accusers can be traced back to the original user using forensic specialists,” she said.

She also said she feels conservatives are now a target.  Out of four lawsuits – all are linked to her run for office and outspokenness – only one is ending. “In one we received a summary judgment and all that’s left is a hearing to determine damages to be paid,” she said.

Ratliff said law enforcement – local, state or national – should follow up on any lead that could result in harm, ranging from assault to insurrection.

“Sometimes tips aren’t legitimate, that’s the name of the game. And that’s a drain on the system. We should start to look into consequences for people who knowingly post illegitimate things to intentionally hurt others – to ruin their lives,” said Ratliff.

“If someone called local police department with false information that person could be charged. Yet, people hiding behind computer screens and creating fake profiles are often protected by social media companies when they post fake information,” Ratliff said. “The difference – when someone calls a dispatcher, the dispatcher knows. When someone posts fake information to social media hundreds, thousands or millions are fed lies. These people should be found and charged.”

Jack Windsor is the Statehouse Reporter at The Ohio Star. Windsor is also an independent investigative reporter. Follow Jack on Twitter. Email tips to [email protected].