John Forbes Kerry, the U.S. special presidential envoy for climate, while sitting in first-class, took off his mask today as he settled into his book moments before his American Airlines flight from Boston to Washington took off.

The so-called Climate Envoy was not eating, nor drinking, even though first-class passengers are often served before take-off. 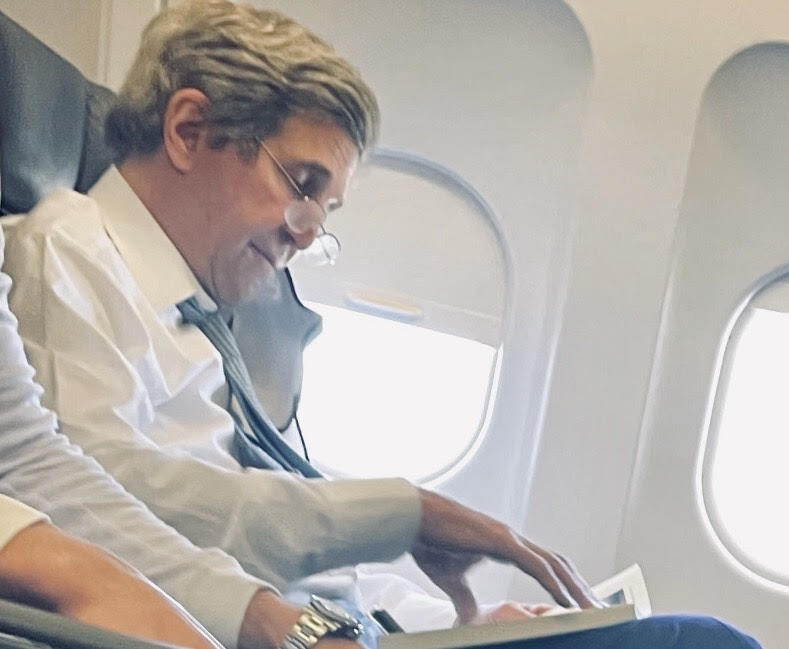 “Our mask requirement has been and will continue to be a critical component of our comprehensive effort to protect the health and well-being of our customers and team members during the pandemic,” said Seymour. “This federal mandate will provide additional support to our crew members who are working diligently to enforce our policy and further reinforce the safety of air travel during COVID-19.”

“As before, customers are required to wear masks for the duration of their journey, including at the airport and on board the aircraft. Children under the age of two will continue to be exempt from the mask requirement,” the release said. “Consistent with U.S. government directives, individuals who refuse to wear a mask may be denied boarding, removed from the aircraft or subject to penalties under federal law, in addition to being barred from future travel with American.”

The Center for Disease Control issued a Jan. 29 order, under its authority from the Public Health Act, that became effective Feb. 2, which reads in part: “People must wear masks that cover both the mouth and nose when awaiting, boarding, traveling on, or disembarking public conveyances. People must also wear masks when entering or on the premises of a transportation hub in the United States.”

The order specifically rules out scarves, ski masks, balaclavas, or bandannas or even shirt or sweater collars, such as turtleneck collars pulled up over the mouth and nose.

Neil W. McCabe is a Washington-based national political reporter for The Tennessee Star and The Star News Network. In addition to the Star Newspaper, he has covered the White House, Capitol Hill and national politics for One America News, Breitbart, Human Events and Townhall. Before coming to Washington, he was a staff reporter for Boston’s Catholic paper, The Pilot, and the editor of two Boston-area community papers, The Somerville News and The Alewife. McCabe is a public affairs NCO in the Army Reserve and he deployed for 15 months to Iraq as a combat historian.