Booker was about twelve when he first set foot in a classroom and discovered that he needed a last name. He invented one on the spot, and for the rest of his life, he was Booker Washington. It was then and still is a civics lesson for America. As a slave born on the Burroughs Plantation in 1856, he was simply Booker. But as a freed individual determined to make something of himself, he chose to identify with his country’s founder.

Booker T. Washington—he added the T later—spent the rest of his life getting educated and educating others, black and white. He is out of fashion these days because he preached black advancement through relentless hard work and veered away from challenging the racist public policies of his time. But he still has something to teach us, namely that Americans have to own their history.

The hurry to change the world without first understanding what’s out there is folly. Good instruction in history and civics is the indispensable first step. Unfortunately, that good instruction is becoming scarce.  The latest blow is something called “action civics.”  It has the feel-good, reassuring word “civics” in there, but it is actually a kind of anti-civics. It teaches children that their first duty is to “go out and make a difference.” 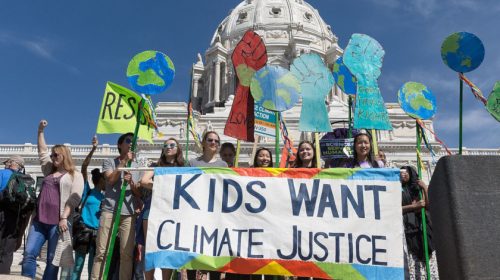 How?  By jumping right into social and political activism.  Children are encouraged to write letters protesting global warming, calling for gun control, and giving drivers licenses to illegal aliens. Far from understanding these issues or knowing anything about the debates that lie behind them, these pupils of action civics know only that it will please their teachers to perform as asked. Action civics is thus pretty close to passive obedience.  And it is all the rage.

Various national luminaries are promoting action civics under the banner of the Educating for American Democracy Initiative. The EAD group includes prominent conservatives such as Lamar Alexander and Margaret Spellings, and several conservative thinktanks.  But make no mistake, action civics is fundamentally a far-left enterprise.  It aims to replace instruction in America’s founding principles, our Constitutional liberties, and the nuts and bolts of self-government in a free society with social justice propaganda and “civic engagement” in the form of conscripting children to advocate for the political goals of their teachers.  At its worst, action civics gives us junior Jacobins for radical causes. And the aim is to bill the taxpayer for this political activism and call it education.

Generation Citizen, a leading promoter of action civics nationwide, trains students to protest for left-wing causes. “Protest” is only a step away from organized street intimidation of elected officials. The mobs that burned down American cities last summer learned their techniques in action civics classrooms. So did all the journalists and political operatives who provided them political cover.

The action civics agenda has so-called bipartisan support because a fair number of conservatives have either been duped by the “civics” label or seduced by the prospect that some of the dollars from the enormous public expenditures will fall their way. “America Needs History and Civics Education to Promote Unity,” said six former secretaries of education in the Wall Street Journal.  Yes, it does, but not the fake “unity” that comes from surrendering our Constitution to the people who think volunteering at Planned Parenthood is as good as learning the Gettysburg Address.

Today’s equivalent of young Booker, perhaps a child orphaned at the Mexican border, thrust into a situation of having to name himself, and confronted with teachers representing the action civics regime, would no doubt skip over George Washington in his search for a patronym.  Something like Booker T. Alinsky might pass muster.

What can we do? First of all, we need to fight back in the states such as Massachusetts, where action civics has already been planted. Second, we need to present good alternatives in states such as Illinois, where the forces of action civics are on the march. And third, we need to rescue American civics and history education from their false friends, the people who champion civics but who are really content to let the memory of real America wash away.

Peter W. Wood is President of the National Association of Scholars. Wood contributes to RealClear Education.