During the House floor session Monday evening, Speaker Cameron Sexton (R-Crossville), by his ruling, spared his members from a Rule 53 vote regarding the proposed E-Verify legislation.

Rep. Bruce Griffey (R-Paris) invoked the Rule 53 provision from the House Permanent Rules of Order for the 112th General Assembly, which is the process of recalling a bill from committee.  If a Rule 53 effort is successful, the subject bill would be scheduled directly to the House floor for a vote, bypassing the committee process that killed the bill.

Griffey’s HB 0801 lowers the threshold for Tennessee businesses required to use E-Verify for their employees from the current 50 down to 6 employees.

At the hands of five Republicans, the House Banking and Consumer Affairs Committee killed the bill on March 10, with 0 Ayes, 6 No and 1 Present and not voting, The Tennessee Star reported.

Griffey submitted the necessary paperwork to invoke Rule 53 about a week later which set the stage for the matter to be taken up by the full House during Monday night’s regularly scheduled floor session. 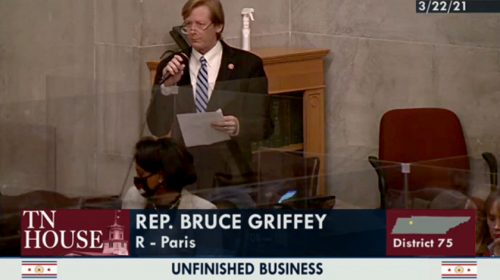 The vote, which was only procedural in nature, would need the support of a two-thirds majority of the House membership to allow for HB 0801 to be scheduled for a vote on the legislation.

Once the 26 bills on the regular calendar were taken up, the House then moved to unfinished business.

It was during that portion of the meeting that Griffey was recognized by Sexton and made the Rule 53 motion to recall HB 0801 from the subcommittee.

He began to explain the purpose of his motion as addressing a crisis at the border that is creating an existential threat to jobs and wages, before Sexton cut him off for addressing the legislation and not the motion.

The House Parliamentarian, at the request of Sexton, said that the debate had to be limited to whether or not the bill should be recalled, with the merits of the bill not being up for debate.

Griffey referenced Mason’s Rules of Order, under which the House operates in the absence of other specific House rules, and said he is allowed to address the purpose of the motion.

At that point, it was apparent that tensions were rising.

The Parliamentarian then read to Griffey from the Mason’s manual that it is not in order to address the merits of a proposal in such cases and that debate must be confined strictly to the purpose of the motion.

Griffey responded that he was trying to address the purpose of the motion that would give every member of the House the opportunity to vote as to whether their constituents support E-Verify, or the Chamber of Commerce and the NFIB (National Federation of Independent Business).

At that point, Sexton asked Griffey if he had made a motion, to which Griffey responded in the affirmative.

Sexton said, “We have a motion.  No second.”

With Sexton’s ruling, House members were spared from having to go on the record with their vote on Rule 53, which could have been construed as their position on the merits of the bill.

The video of the unfinished business portion of the House floor session of Monday, March 22 can be watched here.