In one microscale step for machine, but a potentially significant leap for the treatment of brain cancer, researchers at the Harbin Institute of Technology in China have created controllable microrobots that can breach the blood-brain barrier and deliver cancer drugs to tumors in the brains of mice.

They detailed their efforts in the journal Science Robotics.

The blood-brain barrier is a layer of cells that prevents circulating blood and any potential pathogens in it from entering brain tissues. Though thin, it’s nearly impenetrable. Normally, that’s a good thing, but when the brain is afflicted with a malignant tumor, it’s not. Just as the blood-brain barrier blocks pathogens from passing, so, too it locks out cancer drugs. That leaves surgery and radiation therapy as the two primary treatments for brain cancer.

Early-stage attempts have been made to temporarily disrupt the barrier, allowing treatments to pass, as well as to design nanoparticles so small that they can sneak through. These methods are progressing.

The Harbin Institute of Technology researchers’ robotic approach is a novel one. Qiang He and his colleagues created magnetic nanogels, loaded them with a cancer drug, then enveloped them with membranes from E. coli bacteria to prevent the drug from leaking. The team subsequently coaxed specific white blood cells called neutrophils to consume the coated nanogels, a process called phagocytosis. Once the magnetic nanogels were inside the neutrophils, the researchers could control the neutrophils by applying magnetic fields. “Neutrobots” were born. 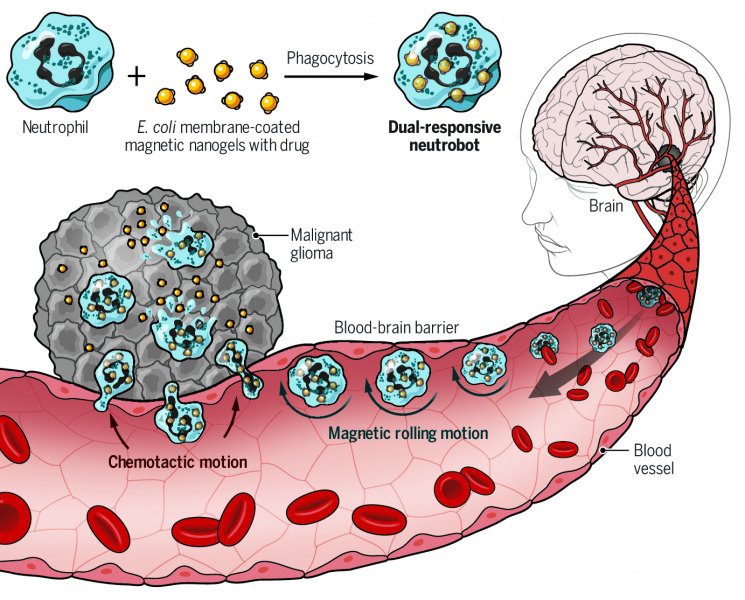 Next, the researchers injected their neutrobots into mice with brain tumors and utilized magnetic fields to get them to move toward the brain. Once there, the neutrobots were able to cross the blood-brain barrier through a process which neutrophils use called chemotaxis and deliver the cancer drug to the malignant tumors. This was confirmed via in vivo imaging as well as through prolonged survival of mice treated with the neutrobots compared to untreated controls.

In an accompanying editorial, robotic engineers Junsun Hwang and Hongsoo Choi of the Daegu Gyeongbuk Institute of Science and Technology in the Republic of Korea hailed the study, but cautioned that much more work needs to be done before its findings can be translated to humans.

“Bench-to-bedside translation with respect to targeted drug delivery by neutrobots or microrobots is still some way of,” they wrote.

“Real-time visualization of microrobots and the navigation path is an essential requirement for successful targeted drug therapy in vivo. Moreover, continued efforts will also be needed to develop magnetic control systems with a large workspace that can accommodate a human-scale subject and generate sufficiently strong rotating magnetic fields for magnetic actuation of microrobots. We are hopeful that these goals will be realized by researchers in the near future.”

Ross Pomeroy is a reporter at RealClearScience.