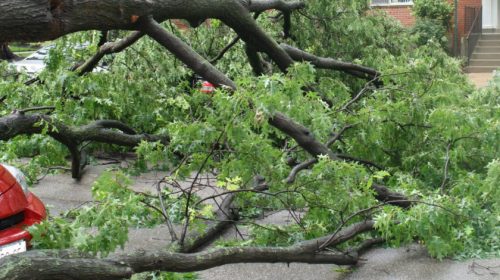 “The SEOC remains operational today to support local requests for assistance and resource needs, and to gather information from partner agencies and county emergency officials about the ongoing response to weather impacts.”

Localized impacts, the TEMA reported, include the following:

The National Weather Service is surveying tornado damage in Henderson County. The U.S. Army Corp of Engineers reported that the Cumberland River Basin had seen between 3 inches to 8 inches of rainfall during the preceding 48 hours, according to TEMA.

As of Sunday afternoon, TEMA reported approximately 5,200 customers were without power statewide, including those in the following areas:

A boil water notice was in effect in Henderson County for Lexington Utility customers. Lenoir City in Loudon County was without water service currently, TEMA reported.

Power outages had fallen from a peak of around 15,000 customers Saturday night to around 5,200 Sunday morning.

“The State SEOC is monitoring river gauge reports in Tennessee, in conjunction with the U.S. Army Corp of Engineers and the National Weather Service, to prepare if flood resources or response operations are needed.”

Tennesseans who need help with cleaning up following the storms and flooding, according to the press release, can call the Crisis Cleanup hotline at 833-904-1085.