The Tennessee Senate Health and Welfare Committee recommended for passage an amendment to a bill allowing for religious or conscientious vaccine exemptions. As The Tennessee Star reported, this amendment was originally a bill killed in the House Health Subcommittee early last month.

Prior to the committee hearing, Tennessee Stands gathered in a “We the People” rally to show community support for the amendment. Tennessee Stands Executive Director and founder Gary Humble led the event, with speeches from State Senator Mark Pody (R-Lebanon), State Representative Bruce Griffey (R-Paris), and a prerecorded statement from the bill sponsor, State Senator Janice Bowling (R-Tullahoma). 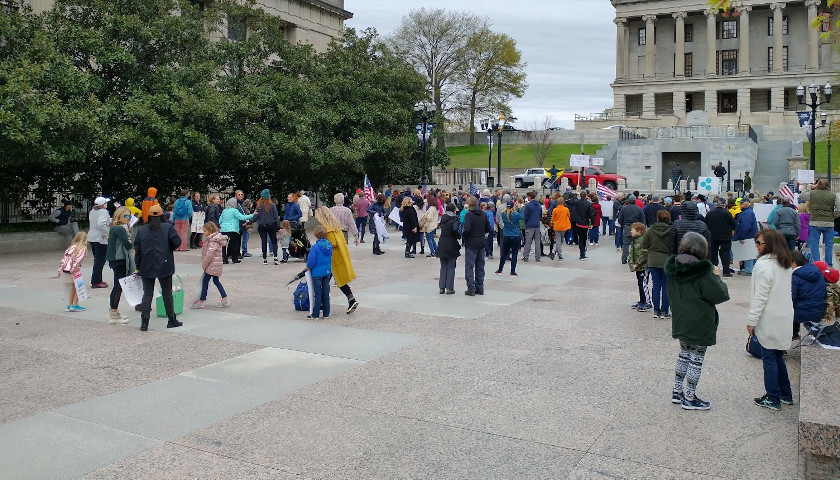 During the Health and Welfare Committee, some legislators raised concerns that the bill would limit state hospitals from requiring vaccines for staff that interact with vulnerable patients. Bowling responded that the potential impacts of the vaccine on fertility were of equal concern.

“There’s much research that shows that the Modern and the Pfizer shot can be very dangerous to people of child-producing age, so young adults. They are not vaccines in the legal sense of the word – they are a gene therapy,” stated Bowling. “[T]he synthetic RNA strand and the messenger protein that’s attached to it, they then go and attack anything that has a spike. So those are the reproductive cells that can be damaged by these shots that are more for therapy.”

Bowling added that PPE would be able to be used without forcing an individual to receive a vaccination against their will, conscience, or religion.

University of Tennessee (UT) sent a spokesperson to explain that universities would be concerned that they couldn’t require certain vaccinations. Similarly, a Tennessee Department of Health (TDH) spokesperson said that TDH concerns about the bill were that less people would be vaccinated.

“One of our biggest concerns was [that] as it stands, I think anything that opens the door to decreased uptake – whether it’s COVID or any vaccine – would just have huge negative impacts across the system,” he stated. “All of these vaccines that have been introduced for COVID – they really are vaccines, they are preventive. They’re not treatment for the disease, and I think by standard definitions definitely not are gene therapy, and I think [that] can definitely scare folks unnecessarily. The vaccines that we have, the side effects are very low.”

Bowling said she respectfully disagreed based on conversations she’s had with doctors and extensive research she’s reviewed.

“The mRNA [is] a synthetic form, it is not legally a vaccine because it does not contain any part of the COVID virus. But that’s not the issue, quite honestly,” stated Bowling. “The issue is, do Tennesseans and American citizens have the right to determine which medical treatment takes place in their body based on religious rights of conscience.”

She asserted that the amendment would align an individual’s God-given, constitutional rights.

The Senate committee voted in favor of the bill as amended, 8-1.