Conservative powerhouses Charlie Kirk and Candace Owens addressed college students, community members, and a few cross-country travelers in downtown Nashville on Wednesday. Turning Point Nashville arranged the event as a part of the Turning Point USA (TPUSA) GenFree Tour. Attendees filled every seat, stood along the walls, and in the empty spaces around seating – and more waited outside the building for any opportunity to enter. 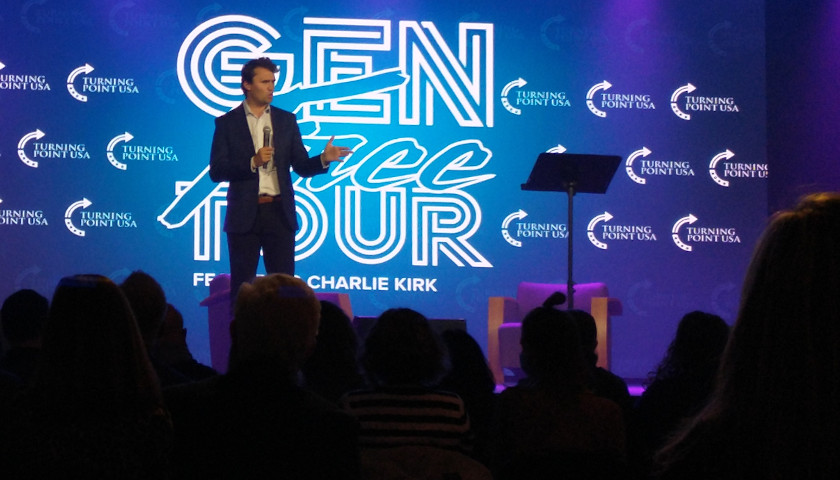 Pastor Steve Berger, the founding pastor at Grace Chapel in Franklin, provided the opening remarks and prayer. Turning Point Nashville President Jeffrey Seraphine explained that faith should serve as the guiding principle for young conservatives. Berger encouraged the audience to engage in a “courageous faith.” He suggested that audience members read through the book of Acts, and remember that the book of Revelations promises that cowards won’t get into Heaven.

“When you have courageous faith, it doesn’t matter what the devil throws at you,” stated Berger. “[Y]ou know you and God are the majority in every single circumstance and instance.”

Kirk and Owens kicked off their discussion by focusing on current examples of gaslighting.

However, the two agreed that certain gaslighting issues and antics, such as censorship, wouldn’t be occurring if the left side of the political spectrum felt like they were actually winning the cultural and political war.

Kirk shifted the discussion to focus on the current border crisis. He noted that there are three times as many children at the border currently than during the Trump Administration. Owens suggested that people stop calling it a “crisis” and start calling it a “plan.” She claimed that this overwhelming migrant surge is just what the Democrats hoped for and anticipated.

“[I’ve said over the years:] if the Democrats get power again, their goal is to change the demographics of this country,” said Owens. “They’re looking to import a new voting bloc.”

Owens added that Black America couldn’t see this happening because they, too, had gotten married to government and the Democrats. She further suggested that this would happen to the Latino communities, pointing out certain welfare-like incentives such as the in-person learning and hotel lodging.

On the subject of Black Lives Matter (BLM), Owens asserted that it is the most racist organization that’s ever existed in the history of the United States. She pointed out that the organization raises billions, yet isn’t transparent about its funds and none of those funds are given back to black communities.

Kirk asked Owens about her thoughts on critical race theory (CRT) in education. Owens noted that although America has never given more degrees out in its history than now, current generations are the least educated.

That devolved into a discussion between the two about whether those against voter ID would be against vaccine ID. Mainly, they focused on the premise of the argument that minorities had trouble obtaining IDs, and the conclusion that such an ID policy is racist. Kirk wondered what would happen if election officials would require vaccine IDs in order to vote, if those would be considered oppressive or racist.

“They’re hoping that if they keep calling things racist, they’re hoping people get angry enough that they make it go away,” observed Owens.

During the questions portion of the event, the line of students reached the back of the room. Many of the questions were personal, concerning issues those students or their peers had faced as conservatives on campus. Most walked away with similar advice: be unapologetic, and that fighting for the right things would ensure a win in the end.