Tennessee Tech (TTU) is investigating after two professors targeted and threatened another professor and students over their Turning Point USA (TPUSA) involvement.

The professor featured on the flier, navy veteran A.J. Donadio, is a nursing professor that advises the TPUSA chapter at TTU. The incident occurred back in early February; the two suspects are associate professor Julia Gruber and English instructor Andrew Smith. The contents of the poster are reproduced below:

This racist college professor thought it would be a great idea to help start a Tennessee Tech chapter for this national hate group, where racist students can unite to harass, threaten, intimidate, and terrorize persons of color, feminists, liberals, and the like, especially their teachers. Their organization created a national ‘Professor Watchlist’ to harass and intimidate progressive educators, including many women, African-American, and Muslim professors. Professor Donadio and Turning Point USA. You are on our list. Your hate & hypocrisy are not welcome at Tennessee Tech. No Unity With Racists. Hate Speech Is Not Free Speech.

According to the TPUSA website, its Professor Watchlist referenced is a documentation of professors who have discriminated against college students and “advanced leftist agenda in the classroom.”

In an interview with The Tennessee Star, Donadio explained that what bothered him most was how the students were targeted. He said it also threatens his ability to care for patients properly.

“That walked right up to the limit of the First Amendment and almost crossed it,” stated Donadio. “They are undermining my ability to educate my nursing students. When I’m in a hospital situation and a patient isn’t doing well, my students need to know they can depend on me and rely on me. That affects patient care and I take that seriously.”

“Any of my Nashville Good Trouble crew going to call out these fascists tonight? At Rocketown of all places,” wrote Smith. 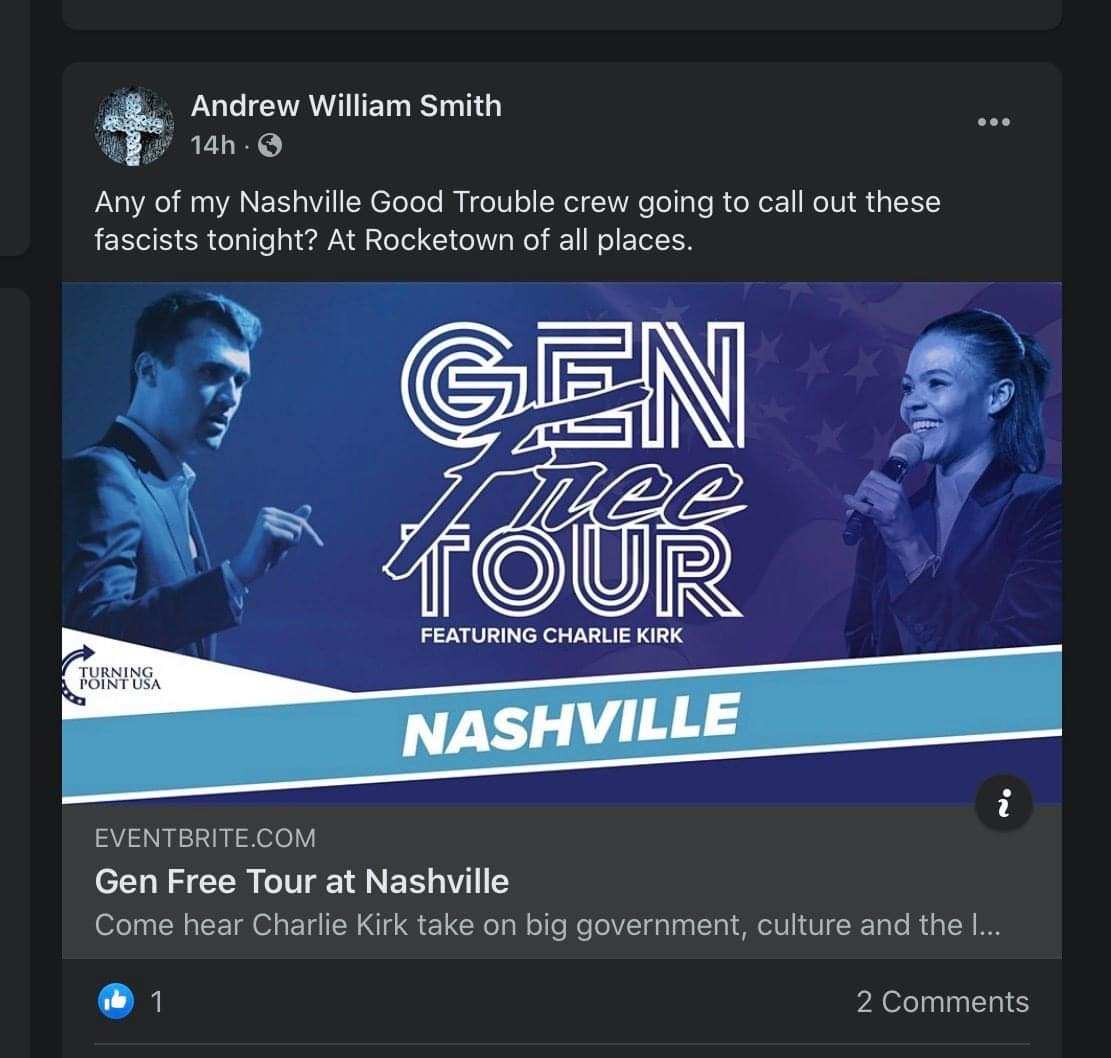 According to his Facebook bio, Smith identifies himself as a “hippy preacher.” Most recently in his defense of Lil Nas X’s “Satan shoes” and corresponding video giving a lap dance to Satan, Smith likened communion to an “astrological pagan” event and called Jesus a “resurrected zombie savior.” He also likened “right wing MAGA types” to those who condemned Jesus to die on the cross.

In some snapshots of surveillance camera footage shared with The Star, one of the perpetrators posting the fliers was wearing a similar scarf and beanie to the one that Smith wears in various pictures posted to his Facebook.

According to a police report, security footage showed a white, blonde female wearing a gold jacket, red sweatpants with white stripes, and blue sneakers with papers in hand in the area at the time the fliers were believed to have been posted.

Gruber has defended her actions to reporters. In an emailed statement to Herald-Citizen, Gruber said she empathized with Donadio and the students harassed by posters she’d allegedly put up.

“I, too, feel Mr. Donadio’s pain, as I feel the pain of the professors [targeted by] the organization he is affiliated with and that he is sponsoring at TTU. It doesn’t feel good to be targeted, to be singled out. It has happened to me many times in this town; it is happening currently because of my efforts to replace the Algood school mascots,” wrote Gruber. “I am relieved to learn that Mr. Donadio has issued with being called a racist. This tells me that he does not identify as one. I would therefore like to extend an invitation to him to help us in our anti-racist activities on campus and in our community.”

In a Facebook post screenshot obtained by The Star, Gruber accused Donadio and his peers of affiliation with Proud Boys, an extremist group, when they attended a Putnam County School meeting. Gruber has been reportedly aggrieved about the Algood Middle School mascot, “Redskins.”

“The Turning Point USA sponsoring [Tennessee] Tech faculty member Donadio , who like me, is not from here — but his voice counts — was sitting right behind me, with his Proud Boys, clapping very loudly when the rep[resentative] for Algood (I think we should next introduce a motion to rename the town Nogood) announced that the board was not going to discuss the matter further [because] it would divide the community,” wrote Gruber.

Donadio told The Star that, regardless, that Gruber’s issue with him concerning the mascot has nothing to do with TTU, TPUSA, or the students targeted.

The Star reached out to TTU spokespersons about the investigation. They didn’t respond by press time.

21 Thoughts to “‘You Are on Our List’: Professors Put Up Campus Fliers Threatening Professor and Students over Accused Racism, Hate Group Activity for Turning Point USA Affiliation”