In accordance with Tennessee state law, T.C.A. 2-12-101 and 2-12-106, the State Election Commission (SEC) appoints five election commissioners for each of the state’s 95 counties for terms of two years.

The SEC appointments occur on the first Monday in April of each odd-numbered year, which this year will be Monday, April 5.

The SEC, comprised of seven members elected to four-year terms by the Tennessee General Assembly, consists of a four to three split, also based on the political party that holds the majority of seats in the state legislature.

Of the 132 total seats in the Tennessee General Assembly – 33 in the Senate and 99 in the House – a supermajority 100 seats are held by Republicans.

For Monday’s meeting, three counties in particular are in the spotlight, albeit for varying root causes, but all related to the membership of their respective county election commission.

While they have not stated an intent to not seek reappointment, there is an effort underway to replace the three Republican members of the Benton County Election Commission.

In fact, Benton County Election Commission Chairman Jim Austin told The Tennessee Star that he only learned of his own pending replacement from a fellow church-goer.

According to several sources, the replacement effort originated with Benton County Mayor Brett Lashlee, who suggested three names as replacements for the current Republican members to Sen. John Stevens (R-Huntingdon).

The Star contacted both Lashlee and Stevens asking for any documents between them and with the SEC related to the replacement commissioners, including the reasoning for the replacement.  Neither responded to The Star’s requests.

Meanwhile, State Rep. Bruce Griffey (R-Paris) who represents Benton County, tells The Star he has not been contacted about replacing the current members of the election commission.

Lashlee has apparently vocalized that his goal, achieved through replacing the commissioners, is to effect a change to the Administrator of Elections for Benton County, a position held by Mark Ward since 2008.

Austin had nothing but praise for Ward, saying that Benton County has the cleanest, finest run and most honest elections in the state.  Austin attributed that to Ward’s efforts in cleaning up the voter rolls and implementing paper ballots as well as a commission with a spirit of cooperation and commitment to doing things “right with the law.”

As a result, the bi-partisan commission has been in 100 percent agreement on every vote since Austin has been chairman.

The Benton County Republican Party is also supportive of the current Republican members of their election commission as well as Ward.

Local party Chairman Matt Jones reiterated a point to The Star made by Austin that it was Ward that brought a paper ballot system to Benton County.

Jones said that Ward was even recognized by Tennessee Coordinator of Elections Mark Goins at the annual convention of the Tennessee Association of Certified Election Officials (TACEO) for the conversion to paper ballots, reportedly saying Ward was 10 years ahead of the curve.

Jones worked under Ward for a time early in his tenure to help clean up the office’s filing system.  The effort to fix filing that was previously done only by the first letter of the last name took hundreds if not thousands of hours, according to Jones.

Ward has almost universal support even among Democrats, said Jones, because they have faith in the system that they know is credible.

Jones also told The Star that typically the Party’s input is sought when it comes to recommendations for election commission appointments, especially with a change this significant.  However, that has not been the case this time.

In fact, a Benton County GOP’s Facebook post is pretty emphatic in its statement to the opposite effect.

“We oppose any effort to remove our current election commissioners or the administrator of elections,” the post reads in part.

A similar incident related to the Administrator of Elections in Henderson County ended up in a lawsuit.

Dan Miller was the Henderson County Administrator of Elections from June 2009 until he was terminated in January 2020 by the county election commission.

The lawsuit alleges that the county election commission’s termination of Miller was forced upon them by members of the SEC who had appointed them.

Two of the SEC members named as defendants in the lawsuit, Jimmy Wallace of Jackson and Greg Duckett of Memphis, still sit on the SEC today.

Also on the SEC is Donna Barrett of Murfreesboro, who has an ongoing working relationship with Benton County Mayor Brett Lashlee.

Records show that Barrett’s company, The Barrett Group (TBG), was paid $2,865.05 in October 2020 from the “County Mayor Other Charges” account for revenue recovery on the Nathan Bedford State and the Country Hearth/Colonial Inn/Neil Hospitality Park. 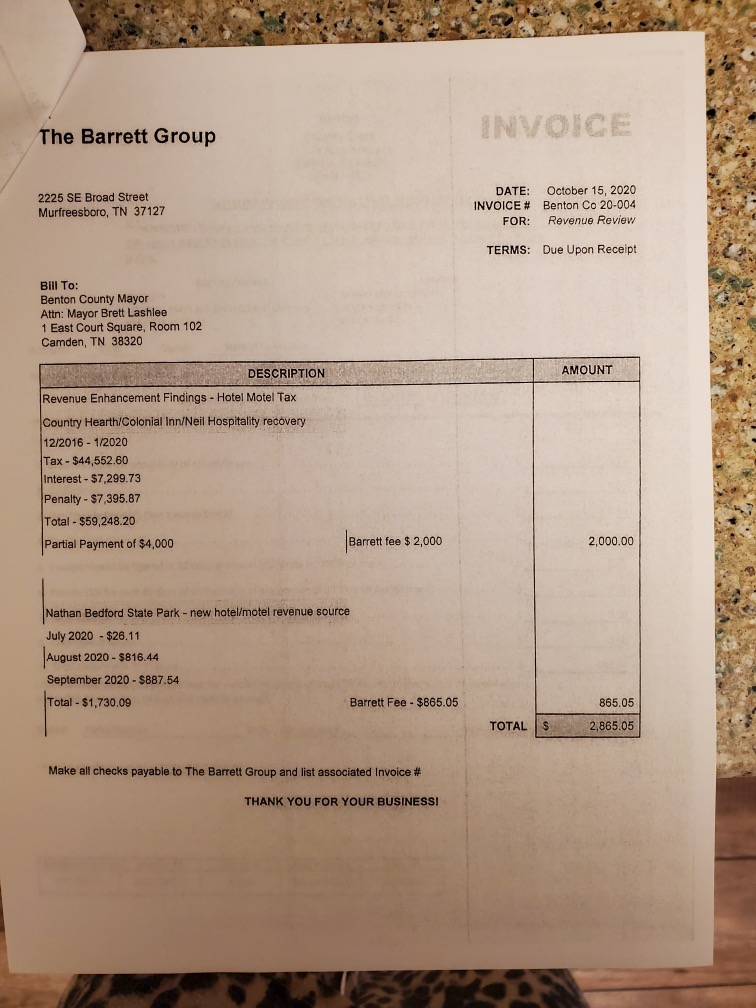 In the documents, Barrett states that new hotel/motel revenue collections from the Nathan Bedford State Park averaged $850 per month for July through September 2020, although July’s revenue was all but non-existent at just $26.11.

The $2,000 balance of Barrett’s fee was for collecting a $4,000 partial payment against the $59,248.20 total due by Country Hearth/Colonial Inn/Neil Hospitality. 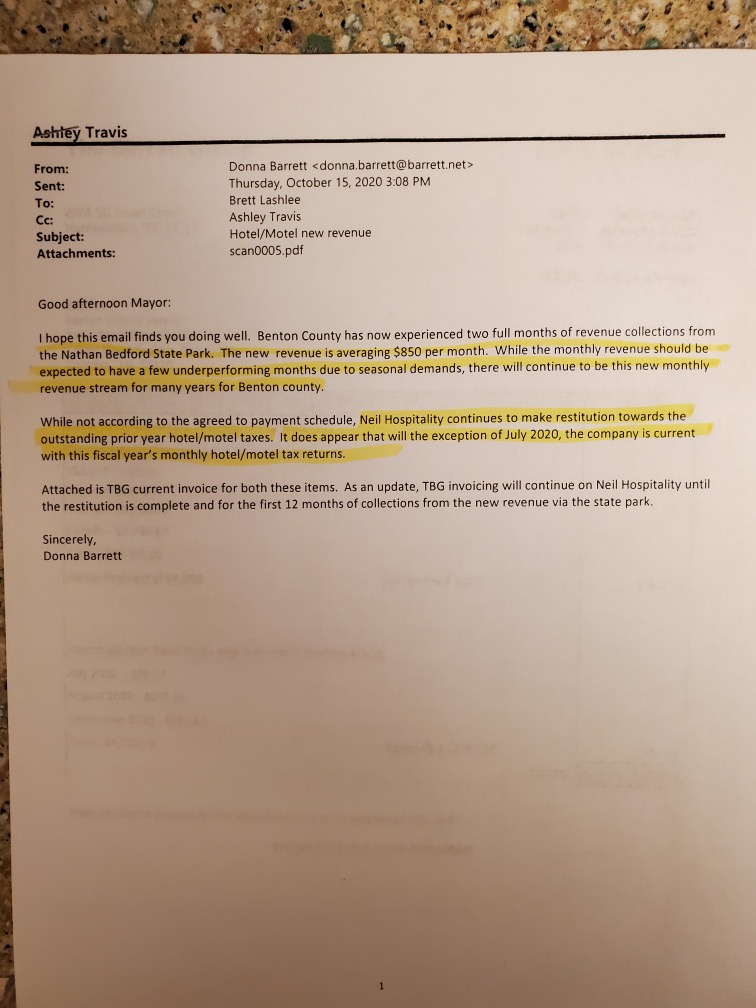 In a cover email from Barrett to Lashlee that included the invoice, Barrett said her company’s invoicing of Benton County will continue for the first 12 months of the new state park revenues.

The replacement appointees could have a major impact on the Nashville Taxpayer Protection Act (NTPA).

The NTPA, an effort by Nashville attorney Jim Roberts and his 4 Good Government group, would revise the Nashville/Davidson County Charter  as “a first step in bringing financial stability back to Nashville,” according to the website.

A second attempt at the NTPA, with its six separate measures, is currently underway.

The first attempt, despite having exceeded the required number of signatures on the charter amendment petition which would get the initiative on a ballot, was defeated due to the Davidson County Election Commission taking the matter to court.

Non-returning Republican Commissioners Emily Reynolds and Jesse Neil both voted in favor of, in essence, suing the citizens of Davidson County.  The commission sought a declaratory judgement in Chancery Court as to whether the Commission had a duty to place the NTPA on the ballot.

Neil was the Commissioner who actually made the motion to avoid holding the special election that would put the NTPA on the ballot.

There is currently no word on who Haile might recommend for the two election commission posts.

Resident Don Beehler, in his letter addressed to the SEC members, said that Henke violated three sections of the Code of Conduct.

Specifically, Beehler stated in his letter, Henke “has failed to faithfully and impartially discharge the duties of her office by violating the following sections of the Code of Conduct:

Section 3. Demonstrate impartiality and fairness to all voters, political parties, candidates and their representatives and all members of the public.

Section 4. Do not make disparaging or supportive comments or remarks about candidates or issues on the ballot … or participating in any way with direct mail, TV, radio, or other forms of communication in favor for or against any candidates or ballot referendum, identifying your position as a County Election Commission member …

Section 8. Conduct all duties in a professional manner.”

As evidence of Henke’s violations, a copy of an email exchange between Henke and Bob Brown, Chairman of the Williamson County Election Commission was provided to the SEC.

Henke’s original email dated July 15, 2020, called out a group, county residents and a state legislator all by name.

Henke referred to the group as “anti-mask” Recall Williamson “run by Gary Humble,” and then said the group was involved in an effort to replace Williamson County School Board members.

Henke went further to call out State Representative Glen Casada (R-Franklin) as “a friend” of Fowler.

Of course, the July timeframe of Henke’s email coincided with early voting for the August 6, 2020, election which included six school board seats and Casada on the ballot.

Henke was admonished by Chairman Brown for being contrary to the Conflict of Interest policy for County Election Commissions with her “political involvement and partisan comments,” for which she apologized.

What Beehler points out in his letter to the SEC is that this is a pattern of behavior for Henke, and he cites several previous examples of Henke referring in a disparaging manner to conservatives, Christian values, and right-wing extremists.

After Brown’s admonishment, in January 2021, Henke posted a comment to the Williamson Strong Facebook page, of which she is identified as one of the four team members.

Henke’s comment was related to a Williamson Strong post about the appointment of a “controversial anti-Muslim activist” Laurie Cordoza-Moore to the State Textbook Commission and praising a Tweet that accused Moore of urging participation in an insurrection.

Also on the agenda for the Monday SEC meeting is a letter regarding Williamson County voting machines.  Williamson County is one of just a few in the state that use Dominion Voting Systems equipment, an issue which has been raised by several citizens in the wake of the 2020 election.

The full agenda for the State Election Commission meeting can be viewed here that includes a phone number of 615-253-1183 for callers to participate virtually.