ROANOKE, Virginia – Republican candidate for Governor Glenn Youngkin made a campaign stop in Roanoke over the weekend. Youngkin, former Carlyle Group CEO, was the guest of Dr. Nancy V. Dye and Dr. Kevin Dye at their home, the historic Rockledge manor.

Nancy Dye, in a striking canary yellow dress and signature stilettos, began by giving a compelling endorsement of Youngkin. Dye spoke of Youngkin being voted the most inspirational player on the Rice University Basketball team, his MBA from Harvard University, and his career at the Carlyle Group. Dye spoke of the candidate as her friend and brother in Christ.

As Youngkin took the stage, the 6’6′ former power forward commanded the attention of the over 100 guests. He spoke of being a defender of conservatism and a defender of his faith. He addressed his election integrity plan point by point, which includes:

When the discussion turned to schools being closed in the Commonwealth, he spoke about how he wanted to emulate Governor Ron DeSantis (R-FL). The crowd hooted and hollered when the candidate stated that, “If schools were closed on his first day in office, I would give the teacher’s unions a call. I would do exactly what Ronald Reagan did, and tell them you can show up to work on Monday, or you’re fired!”

The former Carlyle Group CEO spoke of how Virginia continues to lag in job creation, economic growth, and ability to support a 21st century job growth. He spoke viciously about how “Democrats in Virginia, such as Governor Ralph Northam, kept massage parlors and liquor stores open, but my church and your church had to stay closed. That is a disgrace.”

The candidate then spoke about how he had started his Virginia WINS initiative, which would provide necessary campaign resources to take back the Virginia House of Delegates. Then, he wants to continue campaigning all the way up to 2024, where he wants to help a Republican take back the White House. 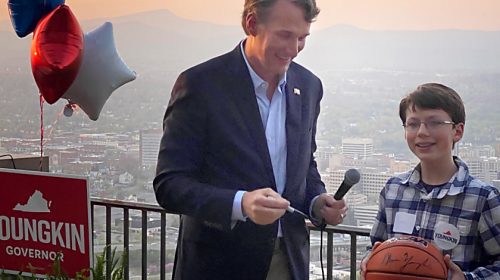 Youngkin then opened the floor to a questions and answers. After graciously signing a basketball from a young attendee, then the tough questions started.

An older gentleman stood up and asked about the recent attacks made by Political Action Committees about Youngkin’s business dealings in China, and how could Youngkin protect American jobs while doing business with the Chinese government.

Youngkin began his retort by saying,

When you start winning, they start going negative on you! The better we do, the more intense the negative ads come. It’s the reality I guess, it’s a sad statement by the way. It’s one of the reasons people hate politics, its one of the reasons why I got into this race.

I actually hate politics, I want to go serve.

Just to be greatly and fully transparent, the people behind these ads are the Pete Snyder campaign. And by the way, he even started it before I announced I was running. Oh, and by the way, the reason I know that is his campaign managers and consultants have babbling about it to everyone in the Commonwealth. It’s the worst kept secret in Virginia.

So I was actually in a Governor’s forum in Fredericksburg and I got asked this question, Pete was there and I asked Pete, why don’t you acknowledge to everyone you are behind this? This gasp of air went out. I don’t play those games, you’re behind it, why don’t you apologize and let’s get on with this because this isn’t the way we are supposed to behave.

Oh, by the way, if you want someone to negotiate against China or any other foreign interest in Virginia, you want me doing it. Trust me, you do. President Trump actually thanked me when he announced the China Trade Deal.

I was amazingly proud, not for me, not for anything I did. We supported him [President Trump] to get a better deal. A tougher deal against China for a tougher deal for American jobs and American workers. Let’s not forget, we need to continue to hold that line. We must hold that line. But I have said over and over again, do you want the varsity or do you want the JV? I think Virginia deserves the varsity and we can go to work there.

I am the only candidate running for Virginia Governor who was thanked by President Trump for helping him stand up to China to get a better a trade deal for American workers. pic.twitter.com/PVCbSFcijY

Another attendee asked Youngkin to answer allegations that the former CEO gave money to liberal causes such as the Southern Poverty Law Center. Youngkin acknowledged that he made a mistake by signing a letter with his co-CEO in support of an employee donation matching program while at the Carlyle Group. He added  that he had never given money to such groups. Shortly before the letter was released, Youngkin said, he scrubbed multiple groups from the list of employee donation matching, including Black Lives Matter (BLM).

Youngkin also fielded a question about Donald Trump and Trump’s support for religious liberty. The gubernatorial hopeful expressed support for the 1776 Initiative, a project aimed to combat liberal indoctrination of American students. He then asked for support of keeping the First Amendment in public life, especially for those of faith.

Although the crowd began to disperse, many continued to approach Youngkin with questions. Many more approached him and asked to pray for him. In the middle of a 100+ person event, a prayer circle broke out.

Afterward, Youngkin took questions from guests for over an hour as others continued to mingle and explore the historic estate and grounds.

Delegate Wendell Walker (R-Lynchburg) was in attendance along with other members of the General Assembly and stated that he was excited to see the enthusiasm. The former Lynchburg City GOP Unit Chairman, 6th District Chairman, and Western Vice Chairman of the Republican Party of Virginia is seen as the senior statesman by many, due to his long years of party service. He stated, “It appears from the Lynchburg area that Mr. Youngkin is making some strong headway.”

Former Roanoke County Republican Women’s Chairwoman and Roanoke County GOP activist RoxAnne Christley told The Virginia Star, “I support Glenn Youngkin because of his vision and foresight for our Commonwealth. Which is essential to break the Republican establishment mold, that has been force-fed to us since 2008, causing us to repeatedly lose. We need Glenn Youngkin.”

The 2021 Republican Party of Virginia convention will be held on May 8th at 30+ polling locations across the Commonwealth.

Matt Colt Hall is a reporter for The Virginia Star and the Star News Network. Follow Matt on Twitter at @MattColtHall on Twitter. Send tips to [email protected]
Photo “Glenn Youngkin” by Glenn Youngkin.