MURFREESBORO, Tennessee – Despite threats of violence and bearing additional costs, Middle Tennessee State University (MTSU) Turning Point USA (TPUSA) successfully brought Ann Coulter to speak on campus. Further, due to COVID-19 restrictions the chapter could only have 50 persons in attendance.

TPUSA MTSU President Colton Pickard said in a statement to The Tennessee Star that this event wasn’t an easy one to pull off. They were reportedly confronted with significant opposition.

“We’re really excited to have Ann Coulter come to campus. We’ve faced a lot of backlash over the past week from students and faculty but we’re glad the university didn’t cave to cancel culture and didn’t try to cancel our event,” said Pickard.

According to TPUSA’s report of an anonymous call from the school’s administration, they had to pay three times the cost of liberal or leftist organizations. The chapter was charged nearly 1600 percent the normal rental fee for the venue – nearly $2,400 compared to $150. MTSU claimed on its invoice that a bulk of the additional expenses were to cover the costs of “Event Production Services.” This, though the event itself appeared to be a bare bones display – no music was played, no fog or flashing lights were emitted, and the projector screen displayed only one slide the entirety of the event. 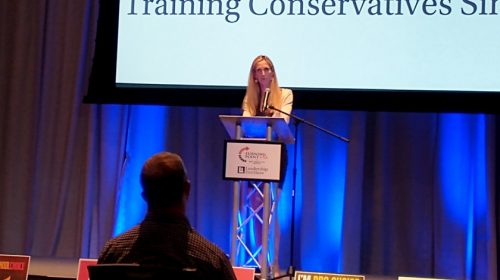 In the TPUSA report, Pickard explained that he and others have even been physically assaulted over their beliefs.

“We’ve experienced hostility [f]rom faculty and students while tabling and handing out flyers on campus,” said Pickard. “We’ve been kicked off campus for tabling as a registered student organization, members from our chapter have had American flags torn down from their vehicles[,] and as recent as this week someone helping us handing out flyers was hit.”

Other members in the report described MTSU as “hostile” toward conservatives.

Pickard explained to The Star that the Leadership Institute reached out to their TPUSA chapter about having Coulter speak on campus. Initially, he said that they were excited to accept the offer.

“We were excited to accept that offer and bring her on campus because we knew she would challenge the views of left-leaning students as well as members of our group and other conservatives on campus,” explained Pickard.

The retaliation was immediate. Pickard told The Star that they began to receive threats of violence if Coulter came. 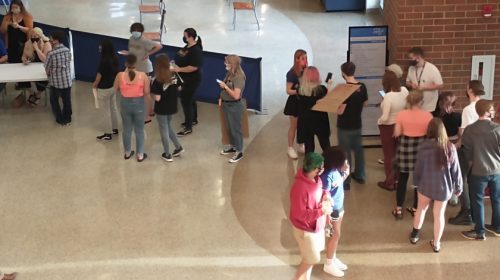 “Some students and faculty were trying to get the event canceled, and we faced some hostility with that on campus and received a lot of threats of protests and some messages that said there could be violence if we go through with bringing Ann Coulter on campus,” shared Pickard.

The Star didn’t see any violence take place before, during, or after the event.

Several hours prior to Coulter’s arrival, a small group of protestors gathered on the lawn facing the venue. None shouted. Some were even smiling and laughing. They held up cardboard signs to express their opposition to Coulter’s presence at MTSU. Some signs were vague: “United We Stand,” or “Strive for Peace.” Others were more pointed: one sign included a Coulter quote about how women shouldn’t vote.

“We’re here to speak out against the hateful rhetoric of Ann Coulter,” The Star overheard one masked male protestor explaining to another. “We don’t believe that she has a place at MTSU.”

The shouting only came during the first few minutes of Coulter speaking. However, much of it was blocked by the walls because none of them made it inside the 50-person, socially-distanced, seated event. The shouting ceased almost as quickly as it began.

A majority of Coulter’s speech criticized previous President Donald Trump. She claimed that Democrats did cheat the election, saying that “they always cheat.” Although, she contended that Trump could’ve prevented or beaten the cheating, if he’d played his cards differently. In comparison to Ronald Reagan, she assessed that Trump’s talk measured up – but his walk left much to be desired. 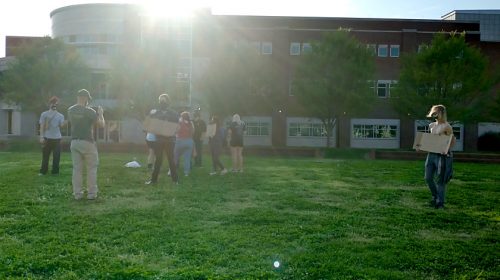 “The Trump agenda without Trump is going to be a lot easier,” said Coulter. “It’ll be ‘MAGA’ without the grift and nepotism.”

She added that the reason she turned against Trump was because of his failed promises, citing the border wall as one example. Coulter compared Trump’s two years of work while he had a Republican Senate and House to a man who gets his wife NFL tickets for their anniversary.

Coulter didn’t only have criticism for Trump, however. She credited him for running on popular issues for the American people that won him the presidency: crime, guns, and immigration.

Additionally, she offered advice for improving the Republican Party. Coulter observed that successful Republicans aren’t afraid of the media – that it’s good to be attacked by the media, even. Her assessment proved true in the case of Senator Josh Hawley (R-MO). After his controversial decision to object to the electoral college results, Hawley raised $3 million.

After the event let out, no protestors were in the immediate vicinity. A few lingered outside with signs in hand, laughing and chatting.

Corinne Murdock is a reporter at The Tennessee Star and the Star News Network. Follow her latest on Twitter, or email tips to [email protected].
Photo “Ann Coulter” by Gage Skidmore.

2 Thoughts to “After Threats of Unrest and a High Price Tag, Ann Coulter’s Appearance Sold Out at MTSU”