ATLANTA, Georgia — Standing across the street from the Georgia State Capitol, in Liberty Plaza, and addressing a crowd of supporters Friday, former State Rep. Vernon Jones answered “the $64 million question you all have been asking.”

“I am planting my flag on the hallowed grounds of the Georgia State Capitol. I am officially announcing my candidacy for the great state of Georgia’s governor. I am so excited I have to say it again. It’s so nice I have to say it twice,” Jones, a Democrat-turned-Republican and political ally of former U.S. President Donald Trump, said. 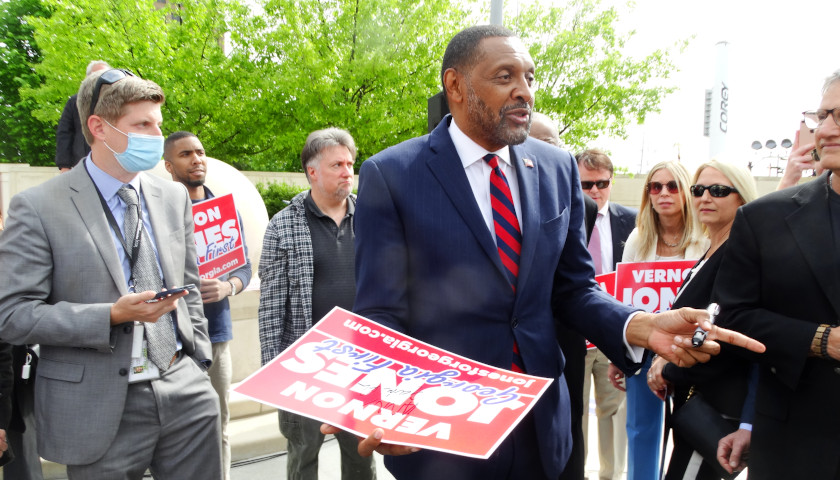 After repeating himself, Jones said current Gov. Brian Kemp’s job performance, especially when it comes to ensuring “a free, fair, and transparent election,” has fallen short.

“Get ready for this right hook and this right uppercut, because we’re coming and we’re fighting. I intend to come forth with a very aggressive campaign agenda. I will guarantee election integrity. That’s important. Unlike others, I will not waver on my commitment on replacing the current voting system that we have in Georgia. All Georgians deserve an election system that has integrity and transparency.”

Jones, as he spoke Friday, also promised to support school choice and to construct a satellite governor’s office somewhere in south Georgia.

Kerik told The Georgia Star News Friday that Jones can lead the state and take on Antifa and Black Lives Matter and also lower the violent crime rate — especially in Atlanta.

“In the aftermath of the 2020 election, I am a strong believer and 1,000 percent positive Joe Biden is sitting in the White House today because people like Brian Kemp and the [Georgia] Secretary of State [Brad Raffensperger] certified a false election,” Kerik said.

“Other states did the same thing. The Democrats, I believe, stole the election. That’s not why Donald Trump lost. He lost because the Republican legislators and governors certified false election results. Someone has to fix that, and I think Vernon can do that.”

GOP activist Debbie Dooley, speaking of a potential rematch between Kemp and Abrams, said the following:

“I am telling you. Brian Kemp will lose to Stacy Abrams,” Dooley said.

Jones, meanwhile, described Kemp as someone who, when needed, failed to fight — and that hasn’t escaped the notice of the 45th president.

“Make no mistake about it. He [Trump] is the leader of our party, and he will at all times be present in Georgia. You will feel it across this country come 2022 and 2024,” Jones said.

“There is absolutely nothing the governor can do to change his cut and run image in the eyes of 45 and his supporters in Georgia.”

According to Ballotpedia, Jones served in the Georgia House of Representatives as a Democrat between 2017 until January of this year. He left the Democratic Party in 2021 and switched to the GOP.

As The Star News reported in November, state legislators pushed Kemp to call a special legislative session before the January U.S. Senate runoff elections. The special session did not happen. Had such a special session occurred then state legislators would likely have addressed the appointed presidential electors and the implementation of laws limiting voter fraud in the general election runoff.

As reported in December, Kemp would not use his authority to change the date of the state’s two U.S. Senate elections from January 5 to February 1 of this year. Moving back the date might have given members of the Georgia General Assembly additional time to coordinate and develop ways to prevent potential election fraud. Democrats Raphael Warnock and Jon Ossoff defeated incumbent U.S. Sen. Kelly Loeffler (R-GA) and incumbent U.S. Sen. David Perdue, respectively.

On Friday Jones said Democrats, as they carry out their liberal agenda, take advantage of Black people.

“They want to put Black people and Brown people on government programs and not give them a job or an opportunity to start their own business so they can create jobs in their own communities,” Jones said.

“They don’t even want Black people to think for themselves. I want to say to every Black person and White person out there: a Black mind is a terrible thing to waste on White liberals.”