FRANKLIN, Tennessee — Williamson County School Superintendent Jason Golden, as reported, cancelled his planned question and answer session with the Williamson County Republican Party, but frustrated members nevertheless met and made him and his policies the topic of conversation. 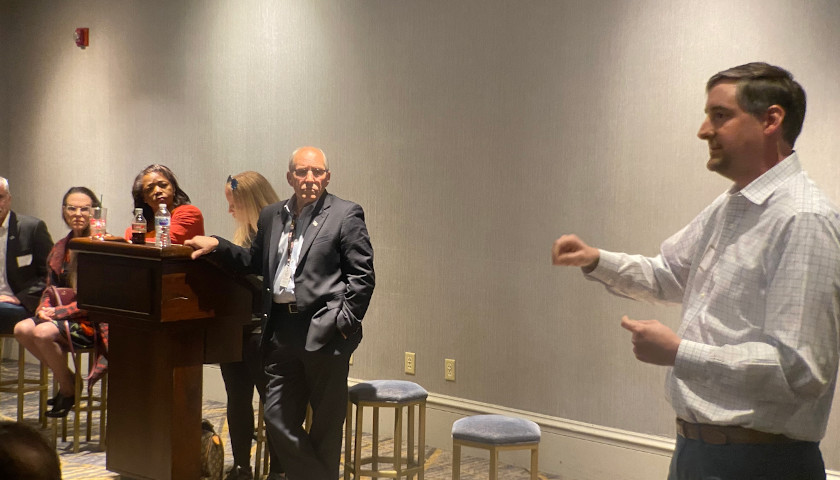 One woman, who did not identify herself, said her seven-year-old daughter attends Liberty Elementary School in Franklin. The woman said her daughter came home from school one day and said the following:

The daughter then asked “Is there something wrong with me? Why am I hated so much?”

“The seven-year-old is now in therapy. She is depressed. She doesn’t want to go to school,” the woman said.

“She is scared to death and has even had thoughts of killing herself. Again, we are talking about a seven-year-old child.”

Another person, Brian Dixon, said he is pulling his son out of the school system, although he did not say which school the child attended. Dixon told audience members that his wife is Asian. Dixon spoke of one school lesson, from what he said was titled The Wit and Wisdom curriculum.

“We are doing the online school because my wife was concerned about the pandemic. She sat with him through the entire course online. She was watching and reading with him what the teacher was teaching. It started out very beautifully talking about Dr. King and his speech and children from different backgrounds all coming together,” Dixon said.

“But then it started talking about the deep and dark portions of what happened during the 1960s. It’s good for him to learn that but not as a 7-and-8-year-old child in second grade.”

The lesson, Dixon went on to say, distressed his son greatly.

“He was very emotionally affected by this. My wife told him he was American. He looked at my wife and said ‘No, no, no. I’m not American. I’m Thai.’ That’s my wife’s background,” Dixon said.

“He was ashamed to be an American after reading this lesson. He didn’t want to be American. He saw all of the evil that had been attributed [to Americans] over the years. That was the last straw.”

Cash told Dixon and others in the audience to notify school board members — and also Golden — when they hear their children say such things.

“Email the whole board and let them know what is going on,” Cash said.

“That’s the only way you’ll get anything done about this.”

School board members said at the time that news of this curriculum caught them off-guard. The Tennessee Star talked to various parents that year who said they feared speaking out against the “White privilege” training, due to a possible backlash against them either personally or professionally.