Virginia has a brand-new state park — Machicomoco State Park, located along the York River in Gloucester County. On April 16, Governor Ralph Northam and other officials opened the 645-acre park, which features camping, picnic shelters, boat launches, and trails. One goal of the park is to tell the story of Virginia’s native tribes through interpretive areas.

“As we open Virginia’s 40th state park, we are reminded of the many ways these natural spaces connect us and bring communities together,” Northam said in a press release. “The story of our Commonwealth cannot be told without the history and experiences of Virginia’s Native tribes. Machicomoco will stand in perpetuity, ensuring that we continue to learn from our past, celebrate the present, and aspire to a better future, one that celebrates the heritage of our Commonwealth and all its people.”

The park is Virginia’s 40th state park. It is located 10 miles downstream from Werowocomoco, the political headquarters of Chief Powhatan. The park is located on land once controlled by the Algonquian Powhatan Confederacy, composed of 30 tribes at its height. 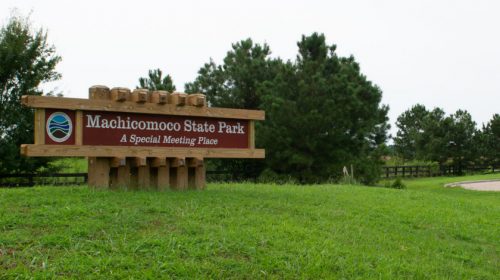 “The name ‘Machicomoco’ was proposed by the tribes in the region who contributed to the park’s design and interpretive themes. It’s an Algonquian word translated to ‘special meeting place,’ which acknowledges the importance and purpose of the site—to educate the public about the native tribes in Virginia and share their stories,” a press release from The Conservation Fund states.

“One of the main objectives of the park is to tell the Virginia Indians’ story,” Chickahominy Tribe Chief Steve Adkins said in Northam’s press release. “It is an opportunity we look forward to as tribal members, because, too often, we haven’t had a voice in telling our own history.”

Machicomoco State Park was created unusually quickly. The land used to be known as Timberneck Farm, an active agricultural farm until 2007, according to a press release.  Later, a residential contractor began developing it for housing. Some infrastructure including a road and a bike trail have been repurposed for the park.

Design and construction had already been completed before the site was transferred to the DCR. The process took about four years, from when The Conservation Fund acquired the property in 2017, until 2021 when the park opened, although more amenities are still being developed.

A Virginia State Parks spokesperson told The Virginia Star, “Machicomoco was very unique in that it was funded by Dominion Energy through mitigation stipulations over the Surry-Skiffes Creek Transmission Line Project on the James River. The park was actually built before we took ownership of it, and much of the infrastructure was already in place when the planning process began.”

“Powhatan State Park, for example, took about 12 years, whereas Machicomoco took roughly 4 years, which is rather unusual,” the spokesperson said.

How Does a Virginia State Park Happen? 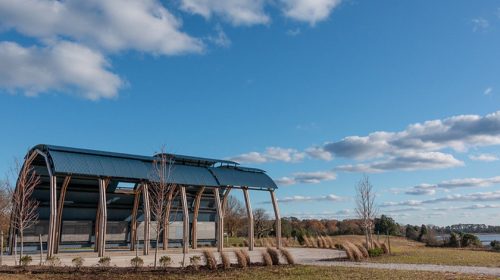 Normally, park development starts with identifying property with opportunity for natural resource protection and broad public access. A willing seller is necessary to allow the DCR to acquire the property. A master plan for the park is also necessary — it outlines park facilities, special features, resources, infrastructure, future development plans, and costs. An advisory committee meets multiple times, and three public meetings are held during the planning process.

“The master planning process, landscape and topography of our parks all play a role in determining the infrastructure developments. Public water access is a good example — we obviously can’t provide that if the natural resource isn’t present,” the spokesperson said. “Typically, amenities and infrastructure are decided though the master planning process.”

Funding and construction normally takes several years. Often, parks are funded by bonds and taxes through the General Assembly. They can also be funded by a 50/50 match from the Federal Land and Water Conservation Fund.

Senator Chap Petersen (D-Fairfax) chairs the Senate’s Agriculture, Conservation and Natural Resources Committee. He said that the General Assembly funds parks through its budget, but that the Governor creates them by executive action. He said parks often begin as a legislator’s pet project.

Petersen said one of his goals is to create a new state park in the Blue Ridge Mountains, because although the Shenandoah National Park is in that area, the state does not have state parks that serve that area.

“I put in a budget amendment this past year which said we would investigate looking at a potential state park in the area of Madison and Greene Counties where the state owns a lot of land, and so we’re doing some feasibility studies on that right now,” Petersen said.

“I’m just looking for lands first of all that we can acquire, and then secondly that have recreational value,” Petersen said. “Different parks have different uses. You go out to the southwest and we might have a mountain lake, and then on the east side, it may be it’s a Civil War battlefield or it’s a riverfront or something like that.”

Unlike many things in the General Assembly, new parks are not very controversial.

“It would be hard to image anything being more non-partisan,” Petersen said.

“The bottom line is we’re looking for the quality of the user experience, that’s who we’re trying to benefit,” Petersen said.

He doesn’t think legislators push for parks to help them get reelected.

He said, “You do it because, let’s face it, you love nature and you want to preserve these spaces.”

Eric Burk is a reporter at The Virginia Star and the Star News Digital Network.  Email tips to [email protected].
Photo courtesy of Virginia State Parks.