WCS Board Member Dan Cash presided over Tuesday’s meeting, which he held at Thompson’s Station Church.

Parents complained school administrators require their elementary-school children to read books that contain themes of racism, segregation, infidelity, suicide, rape, scalping, and the murder of naked women and children in the middle of the street.

“Everything is so dark. Everything is looking to the negative. This negativity in the curriculum has got to wear on these children,” Cash told the audience. 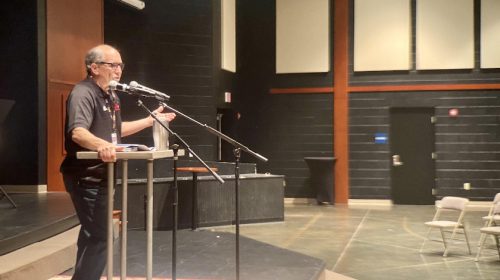 Cash cited a book about Ruby Bridges, the first African-American child to desegregate a school in New Orleans in 1960. The book contains illustrations depicting that real-life event. Second-grade WCS students read the book.

“Students are told to look at all the pictures, and then they have conversations about the book,” Cash said.

“A lot of kids are seeing evil and mean faces, and they are coming away with a different point of view in some cases.”

Fourth-graders, WCS parents said, read books that contain violent content inappropriate for that age group, including a book titled Hatchet and another titled George vs. George.

One woman, who did not identify herself, told Cash that elementary school students need not learn about “day-by-day stuff that is going on in our world and what adults deal with.”

“Just teach them grammar, punctuation, reading and writing. That … comes when children are older and their brains are big enough to comprehend it,” the woman said.

The same woman later said teachers introduce other inappropriate topics into their classrooms.

“When a child comes home from school and tells me that they know which way their teacher stands politically then there is a problem,” the woman said.

“How about we just do reading, writing, and arithmetic, and you leave your politics at home? You are here to teach our child how to live in this life, to be able to read, to be able to do math and to learn about the world. Nothing more than that.”

Two other women in the audience — who said they teach professionally — defended the WCS curriculum. One said Ruby Bridges was six-years-old when she desegregated the New Orleans’ school. Second-grade students can therefore relate to her, the woman said. Another teacher said the curriculum prompted her and her young daughter to have “a wonderful discussion about the variety of different people in the United States and how things are better and how things need to improve.”

Cash, meanwhile, said he plans to broach these topics with his school board colleagues at the next work session, scheduled for May 13.