Additionally, Waltz’s letter reported an event at which “an active duty female colonel described to the Corps how she became ‘woke’ to her white privilege, and felt guilty for the advantages of her race.”

Waltz, a former Green Beret, went on to detail alleged statements regarding police: “At this same assembly, white police officers were described as murderers with no context or court documents provided to corroborate the anecdotes of police brutality.”

West Point said it could not comment on the situation or Waltz’s letter when asked by The College Fix.

In his letter, he stated “These critical race theory teachings … pit cadets against one another through divisive indoctrination under the pressure of ‘wokeism.’” 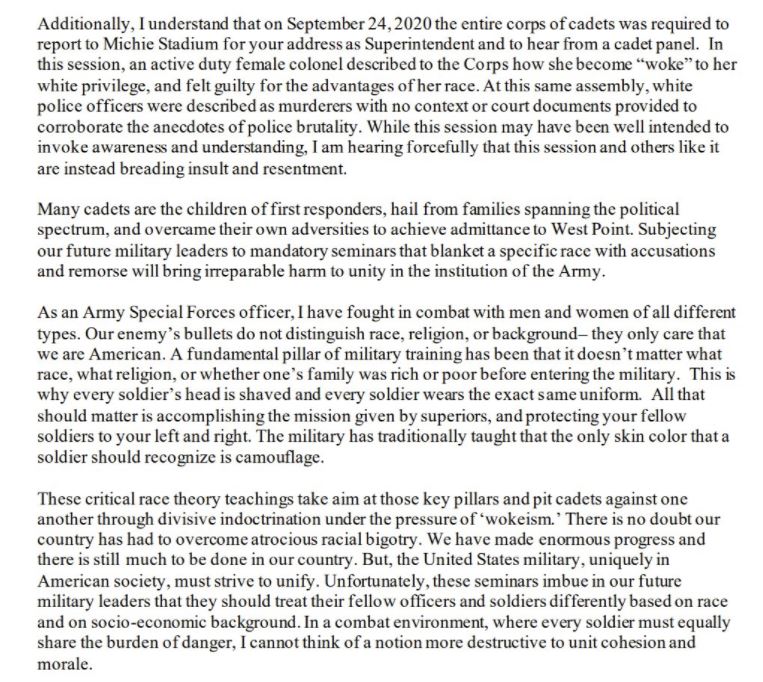 Continuing on the theme of trends in academia, Waltz said he believes “the pendulum goes too far.” Referring back to his letter, Waltz notes that “when you have mandatory formation from officers … talking about how they accepted their whiteness … that to me is unhealthy.”

He explained that he is no advocate of revising America’s history.

“I’m all for every cadet understanding our very checkered history,” he said.

At the same time, however, he said that social trends are a place where “the rest of American society can work through these issues … our military needs to be a safe place.”

Waltz, a 24-year Army veteran, said that the military needs to remember its bigger purpose: “The enemy’s bullets, whether they’re from Taliban or Al-Qaeda, they don’t care about these issues.”

College Fix contributor Isaac Willour is a student at Grove City College studying political science. He is a regular contributor for GCC’s college newspaper, The Collegian, as well as Lone Conservative. He serves on the executive board for the GCC Journal of Law & Public Policy and the Grove City Executive Council for the American Enterprise Institute.
Photo “West Point Military Academy” by West Point Military Academy.