And that man, Robby Starbuck, told The Tennessee Star Wednesday that Williamson County currently follows the pattern he witnessed in California. 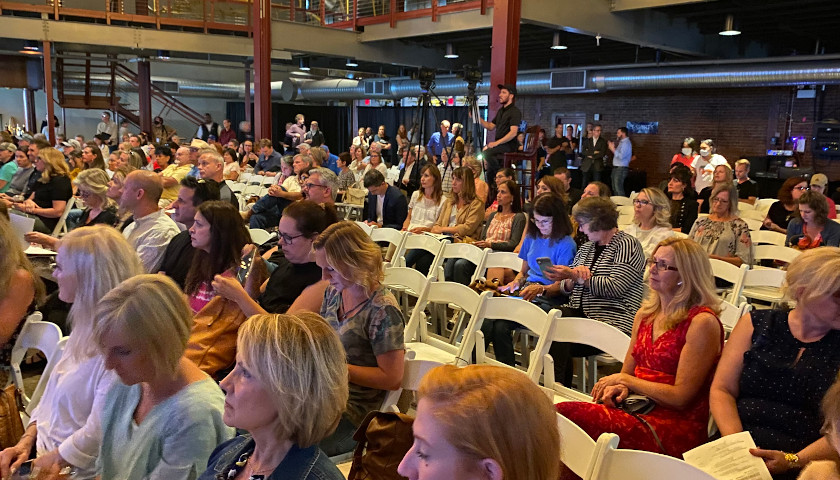 “It is very similar in terms of the idea of fusing together healthcare with education to what happened in California. It led us down the path of Critical Race Theory dominating everything. When you see the direction we are going I feel like my job right now is being a siren and warning where this goes,” Starbuck said.

“But in terms of the curriculum itself there have been issues with books that parents found to be offensive because of the racial direction they go in. I think the more important thing is they are seeing teachers going off-script from the curriculum, and that, I think, is what more parents find concerning.”

Starbuck was among several people who spoke Wednesday at a Moms for Liberty gathering called CRT 101. They spoke at The Factory in Franklin. A Moms for Liberty member who greeted visitors and who did not identify herself told The Star that about 400 people attended.

Starbuck said CRT is not something that only Williamson County parents should worry themselves with. He said this curriculum could change education throughout Tennessee and that “this is the battlefield to stop it.”

Many people consider Williamson County solidly conservative, but Starbuck said teachers and teachers unions can breach those political walls and bring CRT to the area, regardless.

Starbuck said Williamson County parents tell him that their school board members don’t truly listen to their concerns about CRT and instead offer them “very political answers instead of real answers.”

“We need to start valuing parents again. We need to trust parents. Parents know what their parents are going through. It’s kind of like doctors. A lot of parents complain they go to the doctor with their kid and they know what’s wrong with their kid. And they get ignored. I’ve seen this before in my own family where a child had a really serious illness, and the doctor would not listen to the mom. It took her going to another doctor and having him checked out, and thank God she did. They were able to get treatment,” Starbuck said.

“Had she not [then] her kid probably would have died. It’s this idea of no longer listening to the parent. The school is behaving as if they are an equal guardian of the child. And that is where we are headed. That is why you see so many parents that feel like that is the issue we have to fight against.”

Tennessee Stands spokesman Gary Humble last month called WCS Superintendent Jason Golden “the enemy” for promoting “evil and godless” policies. Humble said “CRT is an ideology born out of the teachings of Karl Marx that says race and power are the keys to understanding American society.”

“CRT says that all of American life – social structures; justice, political, and economic systems; education; and religion – are founded upon race and race alone. As a result, everything in America is inherently and systemically racist,” Humble wrote.